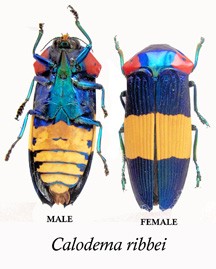 This beetle is known as the “Oh My God!” beetle, which the person who discovered this insect supposedly exclaimed when he first saw it. It is considered the most beautiful of all beetles. Its scientific name is Calodema ribbei and it lives in tropical jungles of New Guinea. This specimen is from Paul Burton’s private collection.

Beetles must be among God’s favorite creatures, for they represent about 22 percent of all living species, including plant life. About 380,000 described species exist, and thousands remain to be discovered and named. Most beetles belong to a group called Polyphaga, which reflects their diverse eating habits (the name means “many eats”). The group appeared on the planet about 270 million years ago, and recent studies of polyphagus beetle fossils show that they have remained unchanged over millions of years – as if Darwin’s notion of evolution didn’t apply to them.

The question was addressed in a recent article published in the Proceedings of the Royal Society. The authors concluded that beetles were resistant to extinction for several reasons, including their ability to change their feeding habits (“polyphagus”) and undergo metamorphosis, which allowed them to take advantage of different habitats as larvae and adults. Also, instead of devoting both pairs of wings to flight, their forewings became hardened to cover the hindwings and serve as body armor. Since beetles were resistant to extinction, they evolved thousands of highly diverse and colorful species ranging in size from a quarter of a millimeter to five or so inches in length. (Smith and Marcot, 2015, Proc. Royal Soc. London, Mar. 18; The Economist, June 7, 2015).