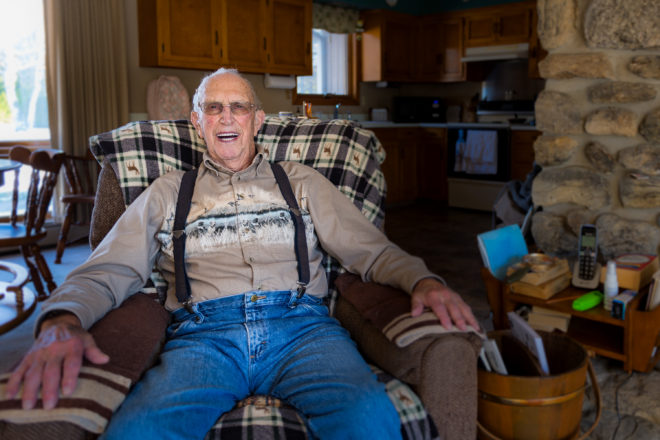 Jim Kramer at his home in Jacksonport. Photo by Len Villano.

From the railroad, to the shipyard, to the homestead

Growing up in Sturgeon Bay during the 1920s, Jim Kramer loved to sit and listen to old men tell stories. Now 99 years old, he has plenty of his own stories to tell, and he still remembers the ones he heard as a little boy.

Kramer comes from a line of early Door County settlers. His great-grandfather Martin Kramer (born Mathias Kremer in 1823 in Prussia, Germany) came to America at age 30. Five years later, he and 18-year-old Mary Magle, born in Switzerland in 1840, walked an old Native American trail from Sawyer (now part of Sturgeon Bay) to Green Bay, got married and walked back to their log house in Sawyer, just behind where Schartner Implement is now located on South Duluth Avenue. Martin and Mary had 12 children.

Fred Kramer, their oldest son, was born in West Sturgeon Bay in 1861. In 1887, he married 24-year-old Martha Hanson, who had emigrated from Norway, and settled in Jacksonport. He built a large house with an attached building for his blacksmith business that later housed LeClair’s Launderette. They had nine children, including sons Bill, Walter and Melton, who joined their father in the blacksmith trade.

Walter Kramer married Edith Rohr and settled in Sturgeon Bay, first on North 7th Place, and later on Cedar Street between the Universal and Leathem Smith shipyards, where he worked as a blacksmith. Jim Kramer, born Nov. 10, 1920, and his three sisters were raised there. When Jim Kramer was little, he used to go to the blacksmith shop next to Pleck’s Dairy to watch Emil Simonar shoe horses.

“But when the horses came up the wood entrance, I hid behind a wall,” he said. “They seemed as big as elephants to me.”

Kramer’s other grandfather was Julius Rohr, whose home was on Third Avenue by the Leathem Smith Shipyard. Rohr and his wife, Elizabeth, had several sons, all of whom worked with their dad, who was in charge of the section crew and responsible for maintaining the tracks for the Ahnapee & Western Railway.

Kramer’s memories of growing up near the water, with access to shipyards and the railroad, sound a lot like Tom Sawyer’s adventures.

“I had a good, happy life,” he said often during a recent interview. “I loved to play in the depot, waiting for Grandpa and my uncles to finish their work for the day, then walking with them to the bar in the National Hotel, where there was always free sausage and cheese. Sometimes Grandpa would take some beer in a little tin pail for them to drink on the way home.

“Grandma Rohr had her hands full, getting up at three or four in the morning to cook a big breakfast, then filling all those lunch pails. I lived next door and spent a lot of time at their house.”

After elementary school at St. Joseph’s, Kramer went to Sturgeon Bay High School, graduating in 1940. He played right end on the football team and remembers filling neighbors’ wood boxes for 10 cents an hour for 80 hours to earn the $8 for his letter sweater. (It still fits, by the way, and is in pristine condition.)

For two years after high school, Kramer drove a truck for the Ahnapee & Western, delivering loads that were too small for a freight car to all the stations down the line.

In 1942, he enlisted in the Navy and was sent to two schools in Detroit to learn about a big gun: the Army 90. He was then sent to Bath, Maine, where he was the “plank owner”: the first person on a new destroyer headed for the Pacific.

The ship sailed through the Panama Canal, traveling at 48 knots (about 45 mph) on the way to Guantanamo Bay, Guam, Okinawa and, finally, Japan. Throughout the war, Kramer was in charge of a crew of 14 gunners. Before he left the ship, he asked for and received the flag that had flown over it for four years.

After boot camp, Kramer returned to Sturgeon Bay to marry his high school sweetheart, Joyce Kugler, on Oct. 31, 1942, at St. Joseph’s. Their wedding breakfast was at the Oriole Restaurant and their reception at the Nightingale Supper Club, where Joyce worked as a server during the war.

When Kramer was discharged in 1946, they bought the first government-built house on Eighth Avenue – the only one in the area with a big maple tree in front. Their sons, Jeff and Richard, grew up there.

Kramer returned to the railroad for several years after the war, driving a semi and doing carpentry work on the side with Joyce’s dad, Richard Kugler.

A duty Kramer was very sad to perform followed the October 1948 murder of an old friend, 85-year-old Sadie Cody. Bill Drews, who had rented a property from her, burned Cody in the furnace in her home. He was arrested while drinking beer at Greystone Castle a few minutes after Cody’s body was discovered and, within 20 days, he was convicted and sentenced to life in prison. Drews’ clothes were returned to Sturgeon Bay via Railway Express, and it was Kramer’s job to take them to Drews’ bride, Julia, whose honeymoon had been permanently postponed.

In 1955, Kramer went to work for Palmer Johnson, first as a carpenter, then as a “loftsman” who drew an outline for a new boat on the floor. He said that Harris Pfeiffer taught him everything he knows about boat building. Eventually, Kramer headed a crew of 14 finish carpenters who built yachts. First he worked on wooden power and sailboats, including several Bounty-class yachts; then he was in charge of the first five aluminum boats that Palmer Johnson built. Later, he finished fiberglass hulls.

Kramer lofted and built the Restless, and at one point he went to New York City to work with designer Britton Chance Jr. to change the shape of the stern of the Intrepid, the 12-meter-class yacht that won the America’s Cup in 1967 and 1970.

“Many of the carpenters on that job spoke only Spanish, and the bosses spoke only English,” Kramer said. “I called back to Palmer Johnson and asked them to send to New York one of the fine carpenters on my team who could serve as a translator.”

Kramer spent 35 years at Palmer Johnson. When the company began building bigger boats, he changed positions and was in charge of service work.

Kramer’s wife, Joyce, grew up on a farm near the intersection of County Roads I and T – acreage that her grandparents, Albert and Lantha Sherwood, had homesteaded.

The Kramers moved back to Joyce’s family property in the late 1970s, first building a barn with living quarters upstairs and then a home that Kramer and his sons logged and built, including a huge stone fireplace. He designed the heating system and built the kitchen cabinets and much of the furniture.

Joyce Kugler Kramer, like her husband, came from a family with colorful stories. One grandfather, Albert Sherwood, was born in New York in 1836 as one of 16 children, 10 of whom died in childhood. Until he was 16, he attended school with Grover Cleveland, later the only president to serve two nonconsecutive terms.

At age 18, Sherwood made his way west to Green Bay and then followed an old, Native American trail on foot to Door County. At the beginning of the Civil War, he enlisted in Company H, 12th Wisconsin Volunteer Infantry and served for four years under Generals Grant, McPherson and Sherman. Along the way, he met President Lincoln.

Discharged on March 28, 1864, he re-enlisted the next day and served until the end of the war. He took the rifle he carried during the war home with him, and his daughter, Arabella Kugler, treasured it. After a number of years, its whereabouts were forgotten until Kramer discovered it under the kitchen floor of the Kugler home in Sturgeon Bay. It now hangs above the mantel in Kramer’s home, which stands on land that Albert Sherwood purchased from the government: 40 acres for $4.

Joyce Kramer died in 2007, just four days before their 65-year wedding anniversary. Since then, Jim Kramer occupies himself with crossword puzzles; working on his vast collection of family genealogy records, old photos and clippings; feeding the flock of geese that lives on the small lake behind his home (enlarged from the spring where his mother-in-law once got drinking water); maintaining his immaculate home; using his telescope to watch the deer on the acreage across the road; and enjoying time spent with his beagle, Pepper.

Kramer tries to attend every reunion of his high school class at Sturgeon Bay and, for a number of years, he’s been the oldest person there and the last surviving member of his football team. He turned 99 on Nov. 14.