Few of us think twice about the water coming from our faucets, but more people in Door and Kewaunee County no longer trust their own wells.

They’ve installed private treatment systems or turned to bottled water. Others nervously await the next day that their bathtub fills with brown water. 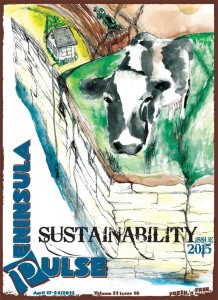 In Door County, a given well will test positive for bacteria roughly a third of the time, according to Bill Schuster of the Door County Soil and Water Department.

But to most of us, groundwater contamination is someone else’s problem to worry about until it’s coming out of our own showerhead. The peninsula’s groundwater has long been vulnerable, but the problem has grown more acute with the rise of large farms, particularly in Kewaunee County, where 15 large CAFOs, or Concentrated Animal Feeding Operations, now exist (14 are dairy operations and one is a beef CAFO).

Though there is just one CAFO in Door County, those large farms to the south produce far more animal waste than can be safely spread on surrounding fields. Liquid waste is trucked to Door County to spread on fields, and as Schuster says, the waste doesn’t need to be spread here to be a problem here. “The aquifer doesn’t recognize that imaginary county line,” he pointed out.

But this isn’t an issue of bad farmers versus public health, and it’s not simply a problem of large farms. The peninsula’s groundwater was vulnerable long before the rise of CAFOs.

In fact, the biggest Northern Door scare in recent years had nothing to do with farms at all. When the brand new septic tank at the Log Den restaurant leaked in 2007, six people were hospitalized and 257 were reported sick.

But in this, our 9th Sustainability Issue, we focused on the impact that farm practices have on our groundwater and the struggle of a much-loved industry and those policing it to adapt to knowledge we’ve only recently come to fully understand.

Steve Grutzmacher tells us exactly why the Door Peninsula is so uniquely vulnerable to groundwater contamination – our karst topography that acts as a pipeline from surface to aquifer.

A landmark examination of the karst landscape was completed in 2007, and eight years later we’re still only beginning to adapt our practices to the discoveries made in that report.

“If you have 50 feet of soil, it will filter bacteria out,” Mark Borchardt told me. “If you have three feet of soil like most of Door County, the karst is like a superhighway to the aquifer for bacteria.”

We talk to Borchardt and another scientist instrumental in the karst report, who discuss the difficulty in translating science to policy. We also provide a glimpse into the difficult roles of the people who must enforce new rules on neighbors who for so long engaged in a practice – manure spreading – that few paid any attention to except to note the smell.

We profile the Kewaunee County advocates who have spent five years trying to get policy makers to pay attention to their tainted wells, and a new legislator getting his feet dirty in the muddied soil between homeowners and generational farmers.

Alyssa Skiba tells the story of one family who had no reason to think their water might be contaminated, but had their health and lives dramatically impacted when it was.

Jackson Parr looks at how Door County came to be known as the strictest region in the state when it comes to farm waste practices, and also touched on the blurred lines of responsibility for accidents that happen on rented farmland.

And we also looked for solutions, with a rundown of the pros and cons of the various fixes trotted out to preserve the health of our groundwater.

In this issue you’ll also find our annual list of resources for getting more connected to your local producers and making better waste choices at home. You’ll find our local producers guide, a schedule of summer farm markets, and a guide to recycling throughout Door County.

We hope you’ll gain a greater understanding of this issue, learn something new, and find something you can use in these pages.