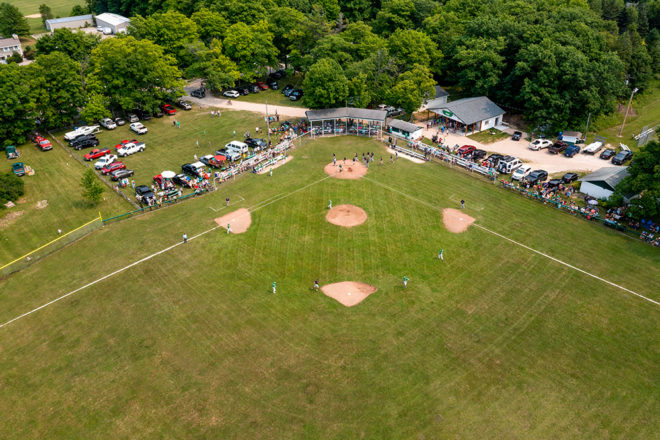 “All right, boys, let’s get some runs now!” a woman yells from the stands.

It’s 1:30 pm at the ballpark on Washington Island, and the battle for Door County League supremacy between the first-place Sister Bay Bays and the second-place Washington Island Islanders is about to commence. And the Islanders are not waiting patiently for their boys to produce.

Older fans sit behind home plate, cooled by the shade of the pavilion. The rowdy bunch perches far down the first-base line, away from the children, where they can soak in the sun and give the umps a touch of breathing room (but not too much).

Here there are no dugouts, no shade for the players – just a simple bench where they bake in the mid-Island heat. And today that heat is in full force – not as swampy as in Kolberg, but draining.

Maybe it’s the island curse, or maybe it’s the lingering effects of nights out watching the Milwaukee Bucks push Phoenix to the brink in the NBA Finals, but the bats are slow to wake up until the top of the fifth inning, when the long, gangly reach of Sam Forkert sends a shot over the fence in left center. There are no computers to measure it, but Fredo puts it at 345 feet. That’s good enough to be taken as fact in the Door County League.

The crowd is full now – at least 500 people – though other eyes put it at 700. In any case, it’s a lot. The four lines at the concession stand don’t seem to be getting any shorter, and the game is clipping along too quickly to lose an inning waiting for a brat. Instead, a fan I don’t know offers me a Busch Light from his cooler, and in this heat, I’m not going to turn him down.

The 50/50 raffle ticket sellers are having a banner day selling to the big crowd, and from the looks of it, so are the vendors at the merch table. Islanders hats and shirts dot the bleachers, donned by young and old.

I sidle up to Ted Jorgenson for the sixth inning. He tells me the Bays bring more fans to the island than any other team, as evidenced by the hundreds of fans perched down the third-base line. I don’t have data to support it, but I’ll take Jorgenson’s word for it.

He first put on an Islanders jersey at age 16, playing for his dad, Terry, in 1975. He finished in 2001 at age 42, walking off with a Washington Island championship. As we talk, his nephew Ryan Jorgenson heads down the right-field line to warm up his arm – another generation keeping the line alive.

“There were a thousand people here on the Fourth,” Jorgenson says. Others concur. The Islanders hosted Baileys Harbor, but also a fireworks show at the ballpark.

As we talk, the Bays stretch the lead. Griffin Cole launches a blast, followed immediately by Sawyer Johnson, making the score 3-0 on three home runs off Islanders pitcher Alex Johnson.

“Threw it right down the pipe,” Jorgenson says.

A drone is spotted hovering high over the outfield, a sight that is not viewed kindly by the Island faithful or their bench. Washington Island manager Joe Cornell stomps toward the infield and alerts the umpire.

“Whoever is flying the drone over the outfield, please take it down,” says the announcer over the loudspeaker.

His language is actually more colorful than that, but you get it. I’m pretty sure the drone belongs to our photographer, who is getting an aerial shot of the crowd and ballfield. I don’t tell them. I’m a mainlander in Island territory on the wrong baseline.

Instead, I slink away quietly.

In the bottom half of the inning, there are signs the Island bats will wake up. They load the bases, putting pressure on Bays pitcher Sam Forkert, with Matt Petersilka stepping up to the plate. But Forkert ends the threat with a strikeout.

In the Bays crowd, the strategizing begins.

“What time is the last ferry? I don’t want to miss it again like last year.”

“You gonna hit the bitters pub or the beach?”

Parents begin to trickle out, getting a step ahead of the “crowd” for food, or a head start on the first ferry out: 30 minutes of guaranteed enjoyment for the kids.

But the Island mounts a final charge against reliever Matt Hecht. A two-out double puts runners on second and third, with Con McDonald stepping to the plate and the crowd coming to life.

But Hecht gets it together, striking out McDonald.

“It’s a sad day on the island,” says the voice on the loudspeaker.

It’s a Bay day on the island.