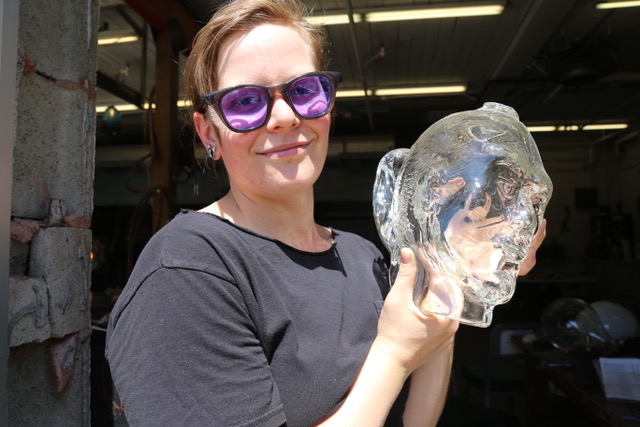 Littman with her self-portrait in glass.

“I was practically living in the ceramics studio – I’d be there after school until dinner,” she said. Shortly after, she attended Alfred University in upstate New York, a school renowned for its exceptional ceramics program.

But at Alfred, it wasn’t ceramics that caught – and continues to hold – Littman’s attention.

“When I got there, I took a tour of the campus, and in the art studio was the hot shop – where students worked with molten glass,” she said. “That was like the most intriguing, amazing, incredible place I’d ever seen.”

Four years ago, Littman moved from her hometown of Cleveland to intern at Popelka Trenchard Glass, a studio and fine-art gallery at 64 S. 2nd Ave. in Sturgeon Bay. She had taken a workshop with Jeremy Popelka and Stephanie Trenchard at the Corning Museum of Glass in upstate New York, one of the premier art-glass centers in the country.

“They rocked that class,” Littman said. “It was really inspiring, and it definitely made me want to spend more time with them, so I was really excited when they contacted me and asked if I wanted to come to work for them.”

Her internship then extended into a job as an assistant at the studio – now part of the Steel Bridge Creative District, which encompasses galleries, recording studios and the Holiday Music Motel, with its Tambourine Lounge and artist spaces that are home to the Steel Bridge Songfest.

Recently Littman was working on a self-portrait – sculpting her own head in glass – with Popelka and Trenchard acting as her team. The roles are fluid, she said, but most glass work, especially glassblowing, requires more than one person.

“Jeremy does assist me whenever I ask,” Littman said. “It’s actually hard for him because he’s so used to being the gaffer – the one making – that as soon as he steps into the assistant role, he feels lost. But I’m trying to teach him how to be an assistant, I guess, as much as he’s helping me learn how to be a better gaffer.”

Two things Littman loves about glass are the team dynamic and the community.

“It has this natural camaraderie that just feels so good,” she said.

While creating the glass head, she’d work for a short time before putting it back into the “glory hole” – a furnace with temperatures that surpass 1,000 F – for more heating, or she’d use a blowtorch to heat part of it at a bench. Littman judges when the glass needs more heat by the way it feels, not the way it looks.

There are visual cues such as color changes, she explained, but by the time the artist notices them, it’s too late.

“A lot is how it’s moving,” Littman said. “Even with the torch, there are some points where I thought, ‘OK, that was too much heat,’ and then your tool wants to stick to it, or that was not enough, and then it’s not moving.

“It’s this really beautiful dance in between there of how the glass is behaving and you’re responding.”

Despite 12 years of working around glass heated to 3,000 F, Littman thinks she’s been burned by the sun more often than by anything in the studio.

“The pipe is the biggest danger because half of it is hot, so you have to be very aware of where you place your hand,” she said. “You learn early on to just touch it lightly.”

Now she’s making a series inspired by Sister Bay’s Pebble Beach: vases with blue near the top and pebble shapes below.

Littman is also preparing for Indiana Green, an annual group exhibition featuring 2D and 3D pieces by artists living and working in Wisconsin. It will open July 23 at the Center for the Visual Arts in Wausau and run through mid-September.

Littman, now 31, carries a fat, leather-bound book filled with pages and pages of drawings and notes about projects coming down the line.

“I want to be able to keep working with glass my whole life,” she said.