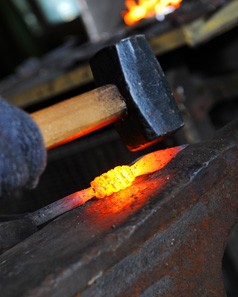 Since 1935 – when it was established by renowned landscape architect and land conservationist Jens Jensen – The Clearing’s program has evolved and its facility has improved. This evolution and improvement has been driven partly by cultural changes, but much more than that, by a desire to provide the best possible folk school experience to those who come to The Clearing, located near Ellison Bay, to take or to teach classes. An important part of the experience at many folk schools around the country is the opportunity to take classes in various types of metal craft, including forging (blacksmithing).

Up until now, forging and other types of metal craft have not been offered at The Clearing because we simply didn’t have the facility to house these classes, but an exciting new project is underway that will change that. The Clearing is planning to build a blacksmith forge. The building will allow The Clearing to establish a metals program, and most importantly, to offer classes in one of the most traditional and most fundamental of the folk school disciplines – forging.

When The Clearing’s Workshop building was being planned – it was built in 2007 – we considered including a forge as part of the building. However, because of the added expense required for the additional facility, along with the equipment and tools it would require, the forge was put on hold. (Even if we had included a forge as part of the Workshop building plan, it would not have been allowed, since state code requires that a forge be at least 100 feet from other buildings.) Then, in the fall of 2010, Jean Barrett breathed new life into The Clearing’s hope for a forge when she donated her late husband’s, David Nevalainen’s blacksmith equipment, tools and materials to The Clearing. Nevalainen operated a forge north of Baileys Harbor and had taught forging and broom-making classes there for The Clearing for several years. Accepting Barrett’s generous donation moved the forge building project to the front burner. (Yes, the pun is intended.)

The forge building is being designed by Door County architect, Pat Mangan, with help and support from a building committee that includes members of The Clearing’s Board of Directors and staff, along with several volunteers. Dan Nauman, who operates Bighorn Forge near Kewaskum, Wisconsin, is serving as consulting blacksmith for the project. In addition to many years of forging experience, Nauman had helped teach Nevalainen the art of forging. To the extent possible, the forge building will include reclaimed lumber – beams and posts (some of them hand-hewn), siding and framing members – from old barns, an old granary and an old cottage that have been donated to The Clearing. Post and beam construction, stovewood and classic “Door County” stonework will likely be incorporated into the building.

Plans for the building interior include space for four work stations, each with its own forge, anvils and set of tools, a work/layout table, floor tools (power hammer, treadle hammer, drill press, torch, etc.), an area for storing metal stock, an area for storing coal, a bathroom and a mechanicals room. Sliding barn doors will open on both ends of the building. A special ventilation system will help ensure good airflow through the building and proper “drafting” of the forges. In addition to forging, the building will be suitable for other metals classes, including welding, metal casting and metal sculpture.

Fundraising is underway for the building and will continue through 2012 and into 2013. Several special fund raising events are being planned, including a silent auction and a raffle. We plan to break ground for the building some time in 2013 and to begin offering classes in 2014.