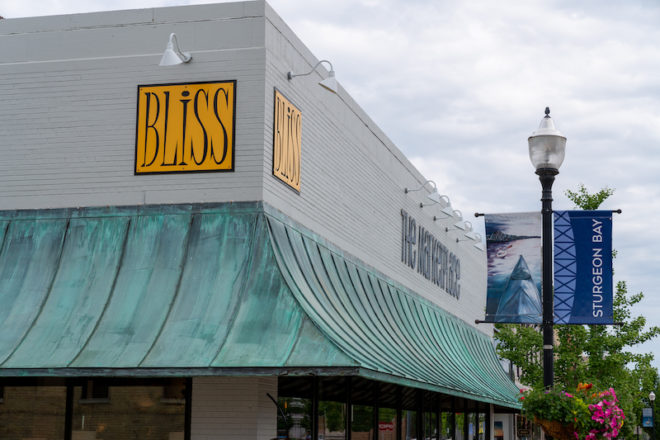 Bliss Home Decor at The Marketplace Sturgeon Bay has helped rejuvenate a cornerstone property in the city. Photo by Brett Kosmider.

A centerpiece of old downtown Sturgeon Bay sat empty for two years, leaving the city scrambling to find a tenant who was willing to take on the former Younkers building at the corner of 3rd Avenue and Louisiana Street. It turned out that city administrators didn’t have to look very far to find a perfect fit.

In November of 2020, Bliss and The Marketplace brought a blast of classy retail to the building.

“I’ve heard a lot of people say it reminds them of Marshall Field’s in Chicago,” said Todd Trimberger, who, with his partner, Dr. Kelton Reitz, reimagined the building as the new home of their longtime Jefferson Street store and The Marketplace.

The ground floor is home to Bliss, Lola May’s women’s boutique, and a branch of Monticello, nicknamed Monti, that carries an array of items such as pajamas and cashmere sweaters, but leaves the more complex and customized wardrobe outfitting for the larger and more intimate main store on Jefferson Street.

“I went in there kind of reluctantly,” said Monticello owner Diane Magolan, who has run her store on Jefferson for 26 years. “So I did a pop-up. My business was really hurting [in 2020], so I thought I had nothing to lose. But from the minute I walked in there, it was just delightful. The design was unbelievable, and I have been having a great time there since.”

The three stores flow into each other with no barriers, and they complement each other through an emphasis on design, quality and occasional bits of the unexpected. A wall along the edge of the mezzanine has been removed, revealing the original wrought-iron railing and opening up the space that a second branch of De Pere’s SmithMaker Artisan Co. occupies. It sells crafts, attire and organic dog food, mostly from Wisconsin makers. It is also the location of Shear Style Plus salon, which moved from Institute and has been relabeled as KMS.

The space has been transformed, but the core is original. Dave Phillips, the construction executive for Bayland Buildings who supervised the Bliss project, said his team found the building’s original drawings, which guided workers in moving and removing walls.

“The other thing that helped a ton is that when a building is old, they don’t make you update it to today’s standards,” he said. “Otherwise, you’d almost have to tear it down.”

So the stairways and railings might not meet today’s requirements, but the state’s historic-preservation building code allows them to remain.

The biggest change from the outside is that the windows on Louisiana, which had been blocked by masonry, now use energy-efficient glass, giving the face a handsome, inviting look.

“People asked us to leave the copper awning and to leave the wood floors,” Trimberger said. “We tore off the tile and carpet and refinished the wood.”

The City of Sturgeon Bay contributed $100,000 for the public restrooms and $25,000 to eliminate the tunnel and skywalk behind the store. The Wisconsin Economic Development Corporation also supported the project with a $275,000 grant to the City of Sturgeon Bay that enabled the installation of an elevator in the shaft when the original plan was to leave it closed.

“Anytime you lose an anchor tenant like the Younkers store, it is a huge hit,” said Pam Seiler, executive director of Destination Sturgeon Bay.  “We were incredibly concerned about it – a big building, with historic sentiment. Leave it to Todd and Kelton to take something like that, and preserve it, and make it new for our community.”

The concept for The Marketplace is organic and still growing, so Trimberger and Reitz are looking for businesses that are independently owned and complementary to each other to offer shoppers a new experience.

“The Marketplace is going to transition – to what, I am not sure,” Reitz said. “We will be choosy in the partners we bring in.”

Opening Bliss at The Marketplace in late November 2020 was a bit of a rush, said Trimberger, who decorated the new space for Christmas in 10 days – a task that usually consumed two weeks in the much smaller store on Jefferson Street. But the holiday season was a success, and the business has been evolving steadily since then.

He has received business from people who have moved to Door County permanently because they can work remotely. But first, of course, they want to make their home cozy, and Trimberger thinks a real store, where you can walk through and touch items, is much better than buying through a computer screen.

“Ordering stuff on the internet doesn’t inspire you,” he said. “When you’re walking around in a store, you can take this pillow over to that chair and see your vision come to life.”

For Trimberger, it’s been quite a trip from his early career as the marketing director for Valley Bank (later subsumed by M&I) and helping to launch the state’s first supermarket-based bank branch. But he wasn’t content in the banking field.

“I was surrounded by a lot of people that stayed in banking for the benefits and the seniority and the vacation,” he said. “I was 24 years old, and I thought, ‘Well, I can always go back to that if this doesn’t work, so let’s give it a whirl.’”

Trimberger opened a florist and home-accessory shop called Petal Pusher in Green Bay, then sold it to open Bliss in Sturgeon Bay in 2001.

Even in retrospect, he thinks their caution was justified.

“The retail environment and Sturgeon Bay were very different then. Jefferson Street was just starting to blossom, and Third Avenue had some vacancies,” Trimberger said.

Now the city core is being rediscovered. Reitz, who has lived in Sturgeon Bay for almost 15 years, said it has evolved to become more of a destination, rather than just a place to drive past on the way north. Some of that is because of new attractions such as Graham Park, the Jim Kress Maritime Lighthouse Tower and new restaurants on 3rd Avenue.

And some of that is due to The Marketplace: an old mainstay made fresh and new again.