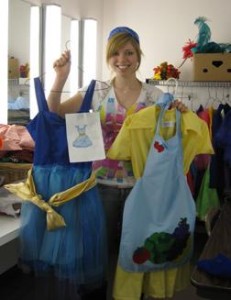 Sage Conrad gives a sneak peak at a few of the costumes for the upcoming “Suessical the Musical.”

Sage Conrad makes her own prom dresses, her Halloween costumes, and her sister’s Halloween costumes. Last Halloween, she was Rainbow Bright, which earned her first prize – a new digital camera – at a friend’s costume party.

Conrad expresses her unique, creative taste with confidence and a smile. When I met with her, she was wearing an orange, high-waisted, ‘60s-style dress with yellow buttons, yellow tights, and a pair of converse.

“I like that fashion expresses all of your inner style, your interests…it illustrates all that on the outside. Everyone has their own kind of style,” Conrad says.

This spring, she takes on her greatest challenge yet: costume designing the high school musical. Based on the books of Dr. Seuss, Seussical debuted on Broadway in 2000. The musical’s story combines many of Seuss’s most famous and well-loved works.

“My favorite thing about designing costumes for Seussical is definitely that I can make everything look totally crazy and really exaggerated. I love that,” Conrad says.

Lizz Thomas, kindergarten teacher and Theater Director at Gibraltar Area Schools says, “I like for kids to pursue their dreams. This is her dream; to be in fashion, to be a costume designer.”

Thomas saw the opportunity for Sage when she said she was interested in helping with costumes. Then she came to the next rehearsal with wonderful designs and drawings.

“Anytime you can get hands on experience to give you information about what you want to do later in life, that’s really valuable,” Thomas says.

In an effort to find a mentor for Conrad, Thomas brought on Karin Kopischke, a freelance costume designer who has worked with many prestigious theaters, including Steppenwolf, Milwaukee Rep, and Door County’s own Peninsula Players.

Kopischke says, “It’s great for her, but also fabulous for the theater department to have a student who is willing to take on this huge job and is excited about it.”

Kopischke was impressed by Conrad’s creativity and talent, and she was also excited about the very logical way she approached the job.

“She knew, almost instinctively, that the best way to get her ideas across was to draw them. Then she helped them make more sense with colors. She had a good feeling for process without ever having taken a class,” Kopischke says.

Collaboration is the key to success in theater, and Conrad not only made an effort to understand Thomas’ vision as a director, but also approached cast members to talk about character.

“With this, I made it so that each person – all of the Whos – had their own profession. So it’s like I’m expressing their inner style with these great colorful costumes,” Conrad says.

When it comes to the challenges and stresses of the job, such as time management and learning how to budget and use her resources, Conrad has certainly risen to the occasion.

“She jumped in with both feet,” Thomas says of Conrad. “Now she’s working hard, doing her best, and trying to see what she can accomplish. That’s what life’s about. We’re very proud of her.”