I stopped to see Jennie (pronounced “Yennie”) at Spot, her clothing and accessories store in Sister Bay, to tell her I’d been asked to write this article. She said, surprised, “An article about me? Why?”

Jennie’s surprise leads me to believe she doesn’t know how well-regarded she is in this community generally, nor that all of her friends – and there are lots of us – consider her one of the funniest, friendliest, smartest, most energetic and fun people we know. 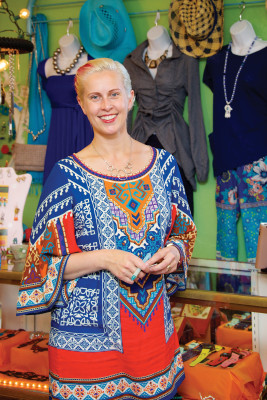 Jennie is generous, understanding, fiercely loyal, and will figure out how to drop everything for a friend – or maybe even a passing acquaintance – in need. An interesting person herself, she is genuinely interested in the people and the world around her, making her someone that everyone else wants to be around.

Born in Österbymo, Sweden, a small village (population 1,500) three hours south of Stockholm, Jennie came to the United States in 1995 at age 20 after living and working in Scotland for a year. She says, “I had the travel bug, and Sister Bay was a logical next place to visit,” as her brother Freddie was there. (Freddie, now kitchen manager at Al Johnson’s, had followed their hometown friend Bo Johnson, nephew to Ingert and Al.)

She ended up helping out at Annika Johnson’s clothing shop. Annika says, “Jennie was a little bit of a rebel – I mean that in a very good way – with her hair, her clothing, and her personality. With her Swedish style, flair and love of bright colors, she was absolutely perfect for my store. She was friendly and smart, and being that my store was not the norm, and Jennie and her looks were not the norm, it was a perfect match.”

Despite traveling far and wide, Jennie kept returning to Door County. (I met her in 1996, when we ended up as roommates.) Those first few years, she stayed about three months, but eventually “the season” became longer, and since 2010 she has lived here year round. Asked when she decided to “settle” here, Jennie says, “I never made a decision that ‘this is it.’ ‘Home’ will always be Sweden, but I just love it here and am very happy here. I love the people – I’ve always found them to be so nice and friendly. I love the small-town living, but also the fact that it’s busy and there’s a lot going on.”

Over the years, Jennie worked at a number of places – including Al Johnson’s Swedish Restaurant, Mink River Basin, A.C. Tap, The Bay Club, catering and event-planning companies – and in a number of positions – including waitress, hostess, manager, bartender, sales clerk. Then, in 2013, Jennie opened Spot in Sister Bay.

Jenny Walker, owner of Cupcake Heaven, notes, “Jennie’s got something special with Spot and a big part of that is because of who she is. She really is inspiring! I came to know Jennie while we were both preparing our shops for opening. It was fantastic to know I was going to have such a positive and energetic shop neighbor. It’s been invaluable to be able to bounce ideas back and forth with someone that was going through the start-up phase with me. Jennie has not only become a sounding board and role model for new business peers, like myself, but she really has become a personal friend as well. Door County is lucky to have inherited such a vibrant, colorful (literally and figuratively), centered, and driven girl from Sweden.”

Jennie acknowledges that she works hard, but says, “I couldn’t have gotten Spot going without the community around me, all the people who’ve volunteered to help, who’ve provided information and assistance.” She adds, “My favorite quote right now is ‘Find a job you love and you’ll never work a day in your life.’ [Confucius] Despite the hours I’m putting into the store, I don’t feel like I work at all anymore; I really don’t. I love it.”

Those familiar with Spot or Jennie herself won’t be surprised to learn she majored in graphic design in college in Sweden, and then obtained post-collegiate certification in advertising from what Americans would call “tech school.” (Jennie confesses to preferring graphic design “before computers – I like doing everything by hand.”) Her sense of style, her love of bright colors – in combinations no one else has ever put together – and her skills at design, layout and display are immediately evident.

Annika comments, “I always thought she should become a designer herself; she has a unique fashion sense and a keen eye.” (Note:  Jennie did design her hot pink and blue knee-length wedding dress when marrying husband Kevin Welch in 2011).

Annika continues, “I think it’s great she opened up her store Spot. It offers a great place to shop for something no one else will have, yet that’s still affordable, and maybe a little wild, edgy, colorful and funky. When I stop in there Jennie always pulls out the perfect thing that she knows I will like.”

Veronika Fajkusova, a friend of Jennie’s who helps her out at Spot, agrees, noting, “Jennie has a good feel for her customers. She is one of a kind, as is her store. To work with her is a dream, because she is passionate about Spot, and that it makes it so fun. When she invited me to go to Vegas for the buying show, these vendors remembered her from other shows, even though we were from a store in a small town in Door County, Wisconsin, because of her personality, and it made me proud to be part of something special. The fact that she will donate some of her inventory to a nonprofit organization just shows how big her heart is and that she cares about her community. She also supports the community by selling merchandise made in Door County by Door County residents.”

In her free time, Jennie pursues various interests. She’s extremely well-traveled, noting, “I’ve been to 48 states in this country; I’m only missing Alaska and Hawaii. And I drove to every single one of them, most of the time alone.” (I’ve accompanied her on two road trips – you couldn’t ask for a better travel companion.)  Jennie has a large, eclectic music collection, and reads extensively, fiction and nonfiction, in both English and Swedish. In fact, Jennie’s knowledge of English grammar is better than most Americans’ – once, when telling her I “dreamed” something the night before, she gently asked, “Isn’t it ‘dreamt’?”

“She’s so disgustingly happy lately,” a mutual friend says, longingly. Jennie laughs at that, and correctly guesses who made the statement. She says, “It’s true, though. I have no stress in my life right now. I am perfectly happy and absolutely loving what I am doing.”