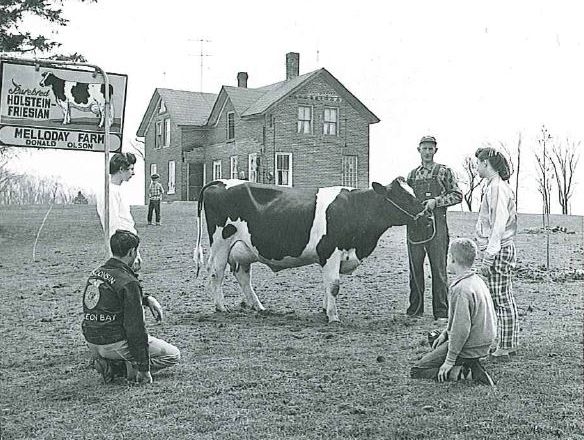 The first 4-H Club in the U.S. – there’s debate whether its name was the Tomato Club or the Corn-Growing Club – was established in Clark County, Ohio, in 1902. In Door County, 4-H celebrates its 100th birthday this year.

Dawn VandeVoort, the 4-H Youth Development Educator with UW-Extension, told the crowd at a May 21 meeting of the Door County Historical Society (DCHS) that in the early years, the clubs here were called boys’ or girls’ clubs and typically focused on specific vocational skills.

For example, the first club for which there is a record was the Vignes Canning Club, begun in 1918 or 1919 and led by Sophie Larson. E. G. Bailey, the county agent in the 1920s, had a goal of organizing clubs devoted to poultry and calf raising, sewing, and gardening to build skills and promote exhibiting at the county fair. The Brussels Poultry Club was established in 1924, and the Vignes Club added home crafts to canning. Much of the club work was connected to the country schools, with teachers serving as 4-H leaders.

Initially, the emblem for the clubs was a three-leaf clover, representing heart, head and hand. The fourth “H,” (health, beating out hustle) was added in 1927. Door County got its first extension home agent in 1942 to provide more home arts training for youth and families. An assistant county agent came on board in 1947 to assist with youth work. Two years later, the first 4-H Club was established on Washington Island. By the end of the 1940s, there were 29 clubs in Door County, some like Vignes, Lucke and Appleport named for the schools where they met, and others – Baileys Harbor, Ellison Bay, Ephraim, Maplewood and Sister Bay – for the towns where they were located. Membership is open to kindergartners through one year after high school graduation.

In the 1950s, George Stanek, an assistant county agent, set the goals of enrolling 50 youth in a home improvement project, working with Home Agent Ruth Scholz to introduce health and recreation into every club (still important today) and having at least two leaders for every club in the county. By the mid-1950s, about 400 youth were involved with 4-H. In 1955, Wayne Eastman became the assistant county agent, which transitioned into the first 4-H Youth Agent position. 4-H camps became popular in the 1950s and continue the tradition of environmental education, leadership, fun and travel, including trips to Washington, D.C. and Madison to observe government in action.

During the ’50s and ’60s, new projects like dogs and small animals, mechanical sciences, aerospace and photography piqued the interest of young people and expanded the opportunities for skill building and learning. By the 1970s, Door County had 28 clubs with 500 members and 130 adult leaders. Countywide Project Days, focusing on learning new skills like basketry or woodworking, were a big hit. Fishing and hunting projects brought more boys into the clubs.

In more recent decades, 4-H has embraced the local and national effort to involve more young people in community service. The clubs also include more projects that focus on STEM – science, technology, engineering and math – and more work with computers and robotics. This fall, Door County’s seven clubs will participate in the National 4-H Science Day, focusing on computer programming and the life skills of teamwork, problem solving and critical thinking.

The Wisconsin 4-H Congress (now called the 4-H Youth Conference) allows young people to network, learn about 4-H beyond Door County and get a taste of college life while staying on the UW-Madison campus. Door County clubs have also participated in in-state and out-of-state exchanges, staying with host families and learning about life and 4-H in other places.

A number of audience members at the historical society meeting had stories about their 4-H experiences. Jay Zahn, DCHS president and long-time Door County treasurer, reported that, as a member of the Cherryland 4-H Club in 1957, he reigned as king of the county fair. (“It was my first elected office,” he said, laughing.)

Father Tony Birdsall said his family’s involvement with 4-H goes back to the early 1920s, when both his parents won ribbons at the state fair. He participated for many years in the ’40s and ’50s and was on the cattle-judging team that took third place at the state fair in the early ’50s.

Robert Gebauer, a charter member of the Badger Club in 1937, brought his 4-H jacket to display. He noted that the tractor-maintenance skills he learned as a boy in 4-H were a stepping stone to his career.

In 1952, the Washington Island Club convinced the state 4-H organization that they could have a fair if the state paid for the prizes. A woman who served as a judge for the livestock entries – a sway-backed horse, a sheep and a rabbit – said they were all declared grand champions.

Cheryl Chaudoir was an active 4-H member in Brown County in the 1960s and ’70s and, after her marriage, served as an assistant county agent in Missouri. Howard Williamson [the husband of Patty Williamson], growing up in north Missouri in the ’40s, related how he cried when he realized the fate of the calf he’d raised. (He was less attached to the goat that was his next project.) His participation in 4-H came to an end when he failed a baking demonstration because he measured salt, holding the spoon over the bowl of muffin ingredients.

Miriam Erickson and Ruth and Carl Scholz shared memories from their long-ago involvement with 4-H clubs.

As 4-H looks toward its second century in Door County, much has changed since 1918, but the focus remains, as always, on project learning, the development of leadership and life skills, community service, meeting new people and having fun.