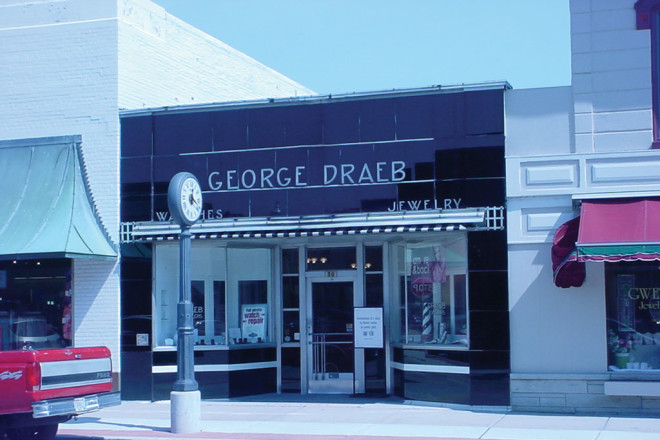 This story begins in 1910, a year remote to all but a handful of centenarians and those avid students of history. A year when the great pitcher, Cy Young, recorded his 500th victory in Major League Baseball; when South Africa became a republic; when Father’s Day was celebrated for the first time; when the world panicked as the Earth passed through the tail of Halley’s Comet; and when neon lights debuted at the Paris Auto Show. So, in a way, this story is a history.

But what this story is really about is four generations of one family, one business in the same location for a century, and the community they continue to serve. 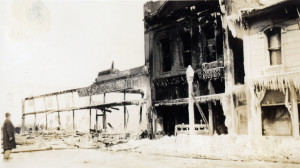 In 1904 (according to the family story), George A. Draeb found a $20 bill on the street in downtown Sturgeon Bay. George came from a poor background and had only completed his education through the eighth grade. Nonetheless, George, who was working in a department store at the time, took the $20 bill into every store on the street in an attempt to discover the owner. Richard Weitlich, who owned a jewelry store on the street, was so impressed by young George’s honesty that he hired George to sweep the floors and perform other odd tasks. George studied the business, took on more and more responsibility, and finally opened his own business, Draeb Jewelers, Inc. at 50 N. Third Avenue on Sturgeon Bay’s East Side, the same building and storefront they occupy today and a proprietorship that has passed to George A.’s son, John William (Bill), to John William’s son, George William, and his son William (Bill) George. 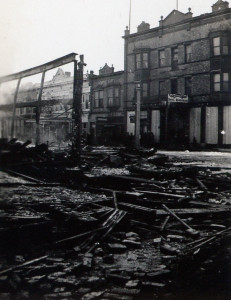 d in their location. In addition to the jewelry, George sold watches, silverware, glassware, and writing instruments. In 1935, the store’s fortunes took a dramatic turn. On February 26, 1935 the Prange Washburn department store (at the site of the present Younkers store) caught fire. The weather was bitterly cold and made the fighting of the fire particularly difficult. Remarkably, Sturgeon Bay firefighters kept the fire from doing any extensive damage to the Draeb store even though the department store was a complete loss.

The reprieve, however, was short lived. During the night, the fire flared up a second time and this fire completely destroyed Draeb Jewelers. It remains Sturgeon Bay’s worst fire in terms of property lost.

George A. was determined to rebuild and, after considerable searching, the local Savings & Loan agreed to finance the rebuilding. While the store was being rebuilt, George opened a store inside the Hahn Funeral & Furniture Home (owned by Henry Hahn) located across the street with what merchandise he was able to salvage from the rubble left from the fire.

Working with Weeks Architects from Sheboygan and the New London Construction Company, George A. designed a new store that would rival the original. Most notably, he made the rather extravagant investment in black carrara structural glass (a popular storefront accent during the 1930s) 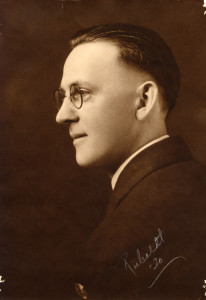 . George William, and his son Bill, who are the current Draeb members to run the store, proudly show off the original invoice for the glass revealing that the store’s founder paid $1,800 for just the material!

After months of work, George A. moved his business back into its Third Avenue home, where it has remained to this day.

George A.’s wife died in October of 1935, before the new store formally opened. As a result, his son John William (Bill) spent a lot of time with his father in the store. Bill was drafted right out of high school and served as an X-ray technician in the Philippines. He returned to Sturgeon Bay in 1946, and the store and his marriage to Joan in 1947 soon led him to Bradley University where he spent two years studying watchmaking. By 1950, he had graduated and was back working full time in the family store.

“In those days [the 1940s and ‘50s],” Joan says, “we sold typewriters, electric razors, and Sunbeam Mixmasters. It probably sounds tacky, but we offered a very eclectic assortment of merchandise.

Different eras featured different popular products, Joan’s son George notes. “In the 1960s Zippo lighters were very popular. We sold lots of them. And then in the ‘50s and ‘60s silverware and china patterns were strong.” 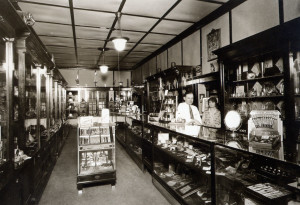 Bill and Joan tried to convince their son George to avoid pursuing retail as a career. While most of the reasons for this effort remain obscure, one factor is clear:  George is left-handed. You see, watchmaking and repair were still a significant portion of Draeb’s business and watchmaking tools were made exclusively for right-handed individuals. George was undeterred, however. He left for watchmaking school in 1973 and was back in Sturgeon Bay by November 1975.

In those days, watchmakers had to be licensed by the state, so George needed to serve a year’s apprenticeship before he took the state test, which involved both written and practical sections.

“The funny thing was that one year after I passed my test, in October of 1976, the state stopped licensing watchmaking,” George says. “So I was one of the last group of licensed watchmakers.” Though mechanical watches are largely a thing of the past, George continues to do a considerable amount of watch and clock repair. 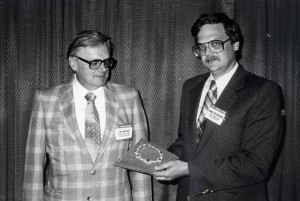 George’s son William (Bill) was another Draeb family member who was uncertain about continuing the family tradition of working in the store. Though he would work in the store after finishing his day at Sturgeon Bay High School, Bill enjoyed the water, working summers at places ranging from the Fish Creek Dock to serving as a deckhand on a Palmer Johnson yacht.

Bill’s change of heart occurred when he met his father and grandmother in Washington, DC in February 2003 for a spring jewelry show. Whether he caught the jewelry bug, or simply decided on a more stable future, by September of 2003 Bill was enrolled at the Gemological Institute of America in Carlsbad, California.

Bill’s schooling was intensive:  in order to graduate he was required to show proficiency in four separate portions of testing, including a lab test where 100 percent is required to pass. Since his graduation Bill has continued to expand his education. He became a member of the National Association of Jewelry Appraisers in March of 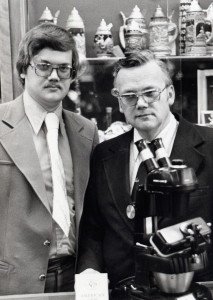 2007, a distinction that requires continuing education courses almost yearly. When taken as a whole, Bill’s experience and expertise has added an additional dimension to Draeb Jewelers that was previously absent.

One of the most recent changes to the physical storefront wasn’t so much a change as it was a re-establishment. George and Joan were sure that a free-standing clock had, at one time, stood in front of the store on the sidewalk. The problem was that, though they had a photo of the store showing the sign mounted on the facade, they had no proof a clock had once stood out front, and the City of Sturgeon Bay wanted proof before they were willing to consider the idea of an installation.

Two friends and customers, Dorothy Berg and Steve Johnson, came forward with postcards of Third Avenue in the 1920s that clearly showed a free-standing clock on the sidewalk in front of Draeb Jewelers and so, armed with the proof and with a separate sidewalk improvement already scheduled by the city, the Draebs were allowed to install their clock in 2001.

Of course, 100 years has meant a lot of changes in the business portion of the establishment, as well. The silverware, Mixmasters, Zippos, and typewriters are all gone. What remains are the exquisite jewelry and gems, a new computerized engraving machine, and the Draeb family tradition and expertise. 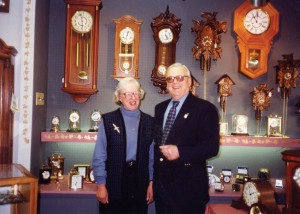 Joan, who served as the store’s bookkeeper from 1959 until 2008 and has seen the store operate through 60 of its 100 years, sums up the first century of Draeb Jewelers this way:  “We just do what we have to do to keep things going. It’s really as simple as that.”

And yet, if it were truly that simple, 100 years in business would hardly seem such a remarkable achievement.