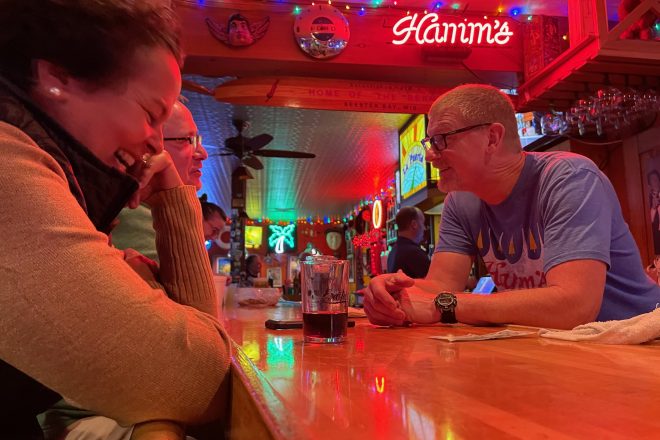 Dave Johnson behind the bar for his final shift at JJ’s. Photo by Myles Dannhausen Jr.

When I first met Dave I couldn’t order a drink from him yet. I had just opened Dano’s Pizza in Sister Bay with my brother and two friends, and when we sat down at a JJ’s high-top for dinner, there was Dave, then in year six at JJ’s. He already had the look and feel of an established veteran barkeep.

He worked at a fast pace, churning out drinks, slinging beers and blending margaritas while carrying on conversations with the regulars without missing a beat. He knew how to make you feel welcome on a busy night. He might not get to you for a few minutes but would give you the look, a simple skill that goes a long way but seems increasingly hard to find (or, I’m just getting old and don’t know most bartenders anymore, which is probably a good thing). The best bartenders weave themselves into the fabric of an establishment. They become hard to imagine anywhere else, and the bar becomes hard to imagine without them.

So it is with JJ’s. After 29 years (29 years!) Dave is moving on, heading to a new role at the Alpine Resort in Egg Harbor. We’ll still be going to JJ’s, and we’ll still be heading down to “say hi to Dave.” The fabric will just feel a little different.

But as I watched Dave hustle through his “going away party” shift on Saturday night, I thought it pretty cool living in a small town, where we notice the change in the fabric at all.