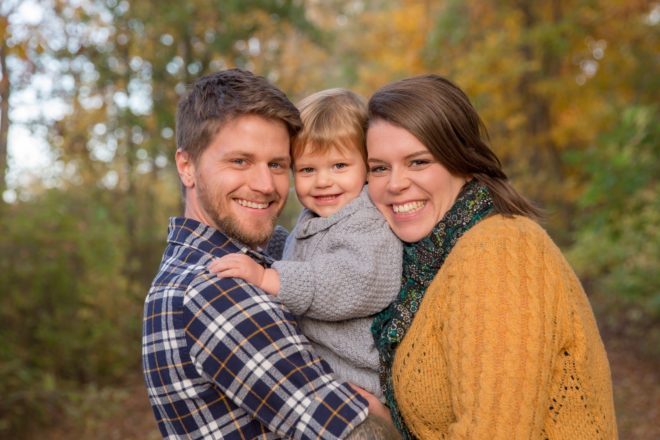 For Matt (left) and Alexis (right) Peter, finding child care in Door County has been a roller-coaster ride. At one point, the Sturgeon Bay residents were driving their son, Jackson, to Northern Door Children’s Center in Sister Bay. Photo by Megan Marie Photography.

When Alexis Heim Peter and her husband, Matt, welcomed their son, Jackson, to the world two and a half years ago, they encountered a challenge that an increasing number of Door County families are facing: securing child care once they return to work.

Initially, the Sturgeon Bay residents couldn’t get into the full Barker Child Development Center in Sturgeon Bay, so for several months Matt drove Jackson to the Northern Door Children’s Center in Sister Bay before work at The Ridges Sanctuary in Baileys Harbor. On the worst days, Alexis had to drop him off before heading to her job in Green Bay.

“That was just the reality of our situation,” Alexis said.

But when a spot opened at the Barker, they jumped at it, and soon Alexis landed a job at the Department of Natural Resources in Sturgeon Bay. Last September, she was appointed to the Door County Board of Supervisors, and the pieces of their life in the community were falling into place.

Now, one big piece of that may be slipping away.

On June 4, the Door County YMCA announced it was considering closing the Barker Child Care Development Center in Sturgeon Bay. Its board was expected to make a decision Thursday. If the Barker does close, the families of 79 area children will be left wondering what’s next.

“It puts us right back at square one,” Peter said.

Child care has been a persistent issue in the county for years, especially after two private facilities in Sturgeon Bay closed during recent years, but the closing of the Barker has pushed the concern into a full-blown crisis that affects both families and employers. A survey that the United Way of Door County conducted this spring revealed that 52 percent of families said they struggle to afford child care, and 37 percent said they don’t know what they would do if their current provider closed or was unavailable.

Door County YMCA Director Tom Beerntsen said the organization has been operating the center at an annual loss of about $100,000 for several years, but it had previously been able to offset the losses through memberships and programming. Membership had reached an all-time high of more than 9,000 people in early March, but the onset of the COVID-19 pandemic has cost the Y memberships and revenue from programming and classes, and pushed it into what Beerntsen anticipates to be a multi-year recovery phase.

“As a nonprofit, we’re not exempt from this crisis,” he said. “It’s going to be a slow climb up the mountain.”

The Barker Center’s budget problems surfaced long before the pandemic. The Y launched the center in 2012 with a $500,000 gift from Ruth Barker to purchase its building. At the time, the center was projected as a revenue generator for the Y.

As a general rule, child care facilities lose money on infants ages one to three because of the low child-to-teacher ratio, which is 4:1. Facilities begin to make up for that as children get older. By age four, the ratio is 13:1.

But in 2015, the Sturgeon Bay School District began offering four-year-old kindergarten, which pulled almost all four-year-olds – and the added revenue they generate – out of the Barker Center. The center lost 25 to 28 children and up to $70,000 in net revenue per year when it lost four-year-olds.

At the same time, staff costs are increasing. The Y competes with schools for child-development specialists, but schools are now offering $17 to $19 per hour for roles such as teacher’s aids while the Y was paying $12 per hour. Beerntsen said the Y would have to increase pay significantly this fall to keep staff, creating an even greater deficit.

Beerntsen said that although there’s a high demand for child care, there’s not a high ability to pay more for the service. A third of the Barker’s families receive fee assistance from the state. If prices increase significantly, many families that are not receiving assistance will find themselves working only to pay for child care.

Beerntsen said the Y has reached out to government, businesses and donors to try to find a way to keep the center going, but it has not received a great response. He said the Y’s decision may finally create a sense of urgency to address the issue. He now hopes to work with individuals or other entities to transfer the center to a new operator.

“This should be done by a single nonprofit that focuses solely on child care and development,” he said.

Alexis Peter said the child care issue is growing into a workforce issue for the county.

“We need young families, but if they find a great job here, they may find they can’t move their family because there’s no child care,” she said.

Alyssa Lee and her husband, Nick, have a 20-month-old enrolled at the center, and Lee is 32 weeks pregnant with their second child. She works for Door County Medical Center (DCMC) as an athletic trainer at Sturgeon Bay High School, her alma mater, but she’s one of several hospital employees who are contemplating leaving their job to take care of their children.

“We’re going through the process of figuring out whether it makes more sense for my husband to quit his job or for me to quit mine,” she said.

Of the 79 active children at the Barker, 21 are children of employees of Door County Medical Center, said hospital CEO Brian Stephens, who has entered into community discussions to try to find a new model or solution to the problem.

“We definitely want to help. We want to be part of the solution,” he said. “But we don’t have expertise in running a day care.”

“There’s a lot of cost involved in recruiting and replacing nurses,” Stephens said. “I worry that the closure will cause a lot of panic if people can’t find alternatives. We have employees who may be able to come up with a creative solution in the short term, but that’s not sustainable.”

Stephens said he has begun discussions with Green Bay-area providers about opening a satellite location in Sturgeon Bay. Staff of the Barker have expressed willingness to stay on if a new provider is found.

Even before the Barker announcement, the United Way of Door County had pinpointed child care as a gap in the community. Director Amy Kohnle said it has been on the organization’s radar for four years.

“We know it’s going to get worse as more Baby Boomers retire and are replaced with parents of young families in the workforce,” Kohnle said.

The United Way has formed three subcommittees to study the issue, including one to investigate alternative models. One idea is to create a central administrator for in-home child care providers.

“I for sure think this is a crisis for families,” Lee said. “When people are talking about how they’ll get by if someone quits their job, then I’d call that a crisis.”