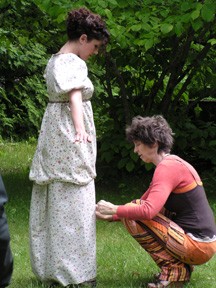 Working under a four-week deadline with the assistance of one intern and one volunteer, costume designer Barb Portinga has costumed two shows for Door Shakespeare this summer.

Her work began by meeting with director Jerry Gomis to gain an understanding of his vision for the productions.

“We like beautiful costumes at Door Shakespeare,” she said, “and that means they are not always exactly accurate to the period.” But they are in keeping with those aesthetic values unique to the company.

For Pride and Prejudice, she used a visual concept of the play’s flow to design costumes. Because the dialogue runs like a movie script, costume changes happen frequently, quickly, and smoothly.

A native of the Twin Cities in Minnesota, Barb Portinga learned her craft as an apprentice at Chanhassen Dinner Theatre. Her design work has been seen throughout the Midwest, and locally at American Folklore Theatre.

Lee Conrad, who attends Carlton College, is this season’s costume intern at Door Shakespeare and Sage Conrad, a student from Gibraltar High School, is a volunteer assistant costumer.

Door Shakespeare presents Pride and Prejudice on Mondays, Thursdays, and Saturdays; and Twelfth Night on Sundays, Tuesdays, and Fridays. For more information or to reserve tickets, call 920.839.1500 or visit http://www.doorshakespeare.com.