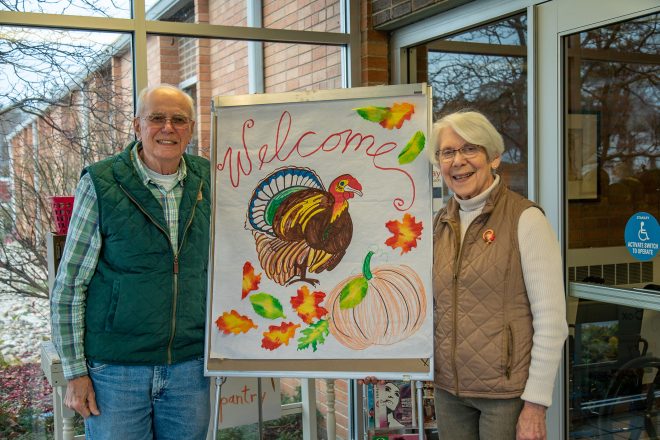 Duane and Leslie Youngsteadt are the coordinators for a Thanksgiving meal that began 42 years ago and today feeds 300-500 community members. Photo by Rachel Lukas.

There came that rare year when Leslie and Duane Youngsteadt would be alone together for Thanksgiving at their Whitefish Bay home.

Leslie’s father had passed away, and none of their three grown children could make it. Rather than open a void for the long-married couple, the clan’s absence created an opportunity for them to do what they’d wanted to do for years: volunteer at the community Thanksgiving meal coordinated by their church, Sturgeon Bay United Methodist.

“And we did, and we loved it so much,” Leslie said. “I think it’s the most wonderful event we’ve ever been involved with.”

That was 2007. The next year, the Thanksgiving meal coordinator, June Peterson – who had given the event her all for 25 years – ran out of steam.

“She announced in church there would be no Thanksgiving dinner, and we had only volunteered for one year, so we went up to June and said, ‘We think this is such a wonderful event [that] we’d like to be your right-hand people. We’d like to work with you; just tell us what to do, and we’ll do it,’” Leslie said.

Peterson showed the Youngsteadts how to coordinate the Thanksgiving meal that’s open to anyone within the community and takes 80-100 volunteers to pull off. By the next year, the Youngsteadts were running the show.

The community dinner began in 1979 with Dr. George Roenning, was carried forward by Emma Bernard, then nurtured for decades by Peterson. The Youngsteadts, now in their eighties, aren’t ready to pass the baton yet, but neither do they know who would take it.

“This is one of the concerns my husband and I have,” she said. “We know we can’t continue doing this forever, and we’re just hoping and praying there will be someone to step up and take our place.”

For now, they have more pressing things to consider – like 150 pounds of potatoes, 14 gallons of baked squash, 80 pounds of corn, 14 turkeys plus eight additional turkey breasts, and 500 small fruit pies that replace the homemade pie served during a non-pandemic year.

The reservations have been coming in since October. The meal typically draws 150 dine-in guests to the church’s fellowship hall, and 150 meals are delivered or carried out. The pandemic prevented the dine-in option last year, and they served 500 meals.

They will again do only carryout and delivery this year, serving up the hot menu, with Pastor David Leistra leading the contactless carryout service.

“They pull up under the canopy, and our pastor and helpers take their meal out,” Leslie said.

Community businesses, organizations and anonymous donations fund the annual meal, and “no one ever says no” to the annual fundraising letter, Leslie said. The meal is free to all, but donations are accepted and received.

The Youngsteadts no longer prepare their own big family feasts, and when their offspring do come with their families, “they know they’re going to come and work; they can’t just come and eat,” Leslie said.

Those who attend the dinner or receive a delivered meal span the demographic and socioeconomic spectrum. Some have financial difficulties; others cannot prepare a meal; others are alone. The gratitude expressed by those who receive a meal warms the heart and is probably why the Youngsteadts find they never have a shortage of volunteers.

“One word to describe this community Thanksgiving is ‘joy,’” Leslie said. “The whole thing is so filled with joy.”

Those who are homebound and have already made their reservations for delivery can expect to receive their meals starting around 3 pm. The two choices for carryout at the 836 Michigan St. address are between 2 and 3:30 pm, or between 3:30 and 5 pm.