• Fracking involves drilling 5,000 to 8,000 feet into the earth’s surface strata, first vertically, then horizontally into shale. Cemented casing at the top of the hole is supposed to seal the shaft. When thousands of gallons of water, chemicals and sand are injected into the holes under high pressure, the liquid fractures the shale, sand holds open the fractures, and natural gas rushes out and up to the surface, where it is captured.

Whether fracturing shale deep underground causes earthquakes is an important question. Initially, it was thought not to be a potential problem. However, as more fracking wells are being constructed, evidence is accumulating that they can trigger earthquakes. For example, in November of 2011 a series of quakes of magnitude 5.7 radiated from an epicenter near Prague, Oklahoma, and tremors were felt in 17 states. A team from the University of Oklahoma analyzed the aftershocks and determined that the first shock occurred within 218 yards of fracking shafts that had been used to inject fluids during an 18-year period. (Keranan et al, Geology, March 26, 2013; Nature, April 11, 2013)

• Can nations unite in developing a plan to control pollutants? In 1985 such an agreement actually happened with the signing and implementation of a protocol to phase out production and release of chlorofluorocarbons (CFCs) into the atmosphere. The agreement was based on the realization that CFCs were degrading the atmosphere’s ozone layer. This layer protects people from UV radiation that causes skin cancer, eye damage and suppresses the immune system. With holes in the ozone layers at the south and north poles rapidly growing in size, nations’ leaders realized that something must be done. Many people, including most scientists, believe that similar agreements are required to limit the release of other greenhouse gases into the atmosphere, including carbon dioxide. (Lynas, M., 2011, “The God Species,” National Geographic Society) 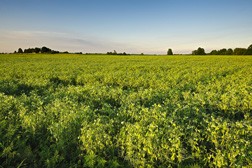 Land plants suck up carbon dioxide to drive photosynthesis to build leaves, woody stems and roots. Thus, plants represent an important “sink” for carbon dioxide, and in return they release the oxygen we breathe.

• Many people do not realize the importance of land plants in sucking up carbon dioxide to drive photosynthesis to build leaves, woody stems and roots. Thus, plants represent an important “sink” for carbon dioxide, and in return they release the oxygen we breathe. On average, land plants soak up one-fourth the annual carbon dioxide emissions from burning fossil fuels. Aquatic plants such as algae are also sinks for carbon dioxide. In spite of these sinks, atmospheric carbon dioxide continues to rise. (Nature, April 11, 2013)

• The headline of a recent article in Science, one of America’s leading scientific journals, says, “Carbon dioxide emissions have changed the chemistry of the world’s oceans in ways that are already harming shell-building organisms and could lead to broad impacts on marine ecosystems.”

Since preindustrial times, ocean acidity has increased by 30 percent. Already oyster populations along U.S. coastlines are showing signs of stress as their larvae fail to live to adulthood. Carbon dioxide impacts many natural systems that determine the health of the planet, and if nothing is done our environment will join many living things on the “endangered” list. (Science, July 13, 2012)