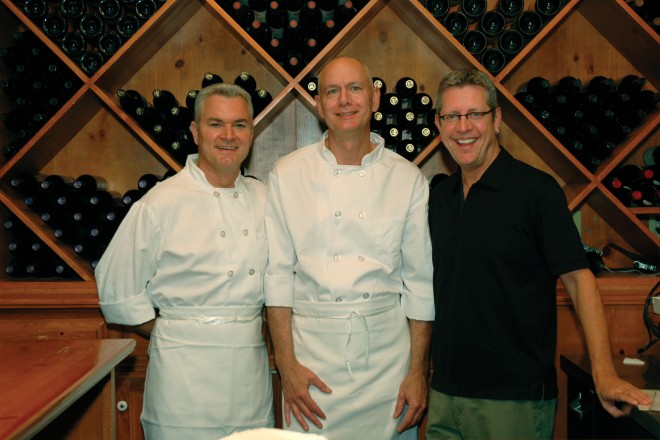 I went to dinner at Trio Restaurant in Egg Harbor with two friends in preparation for this article; my intentions were to enhance and refresh my memory of the dining experience, capturing the nuances of the setting, the cuisine, and the service. However, as I savored the last spoonfuls of the orange chocolate mousse, I realized my initial intentions had been forgotten somewhere between our salad course, the entrées, and our discussion of plans for post-summer in Door County. Although I’d had a remarkable dinner with my friends, I hadn’t exactly accomplished my goal or retained many of the details.

Hoping it wasn’t already too late to seize the specifics I could use to craft my article, I sat back with my cup of coffee and redirected my focus. Unfortunately, the buzz of conversation that had previously surrounded us was gone – we were the last table left in the restaurant. The tabletops were cleared, crisp, and ready for the next night’s patrons. The only occupants of the rustic, wooden bench that ran the length of the dining room were the empty wine bottles perched atop its seatback. I suddenly wished those bottles could have told me the stories they were privy to as their contents were emptied.

The only people besides us in the restaurant were the staff. The servers, dressed in their black attire and white aprons, converged around the bar, finishing up their tasks for the evening. On the opposite side of the room, the owners sat sipping a glass of wine, recapping the evening. On our way out, obliging myself to make some progress, I introduced myself to them and reaffirmed our interview for the upcoming Saturday afternoon.

Going into the interview after feeling a sense of failure about my previous “research,” I imagined the history and background of the establishment, instead, would make up the majority of my allotted words. But as I progressed through my list of questions, I realized that perhaps my misgivings were unfounded; the experience I thought was of little value to this article was what owners Ronald Perley, Jerry Spitz, and Mark VanLaanen would hope I’d envision of their restaurant: “a high energy, lively place where people are enjoying good food, good wine and having conversations as if they were at their home.”

Ronald, Jerry, and Mark have known each other for over twenty-five years, but they have not always been business partners. In fact, they weren’t all even in the restaurant business. When the three met, Ronald was an international banker, Jerry was engulfed in the design industry, and Mark owned the Village Café in Egg Harbor.

Maintaining a friendship over the years proved to be an easy task, but when all three of them were ready at the same time for a change from the stress of their jobs, they initially hesitated to join forces. According to Mark, “Being friends is one thing and being business partners is totally different.”

The three took their time developing a plan for a new restaurant and researching Door County – a place they all were passionate about and had connections to. They wanted to open a restaurant that had the feel of a country French or Italian bistro, a style of restaurant they saw missing from Door County. Jerry said, “We asked local innkeepers and business owners what they thought of the idea and really studied the demographics prior to making the decision to go ahead.”

The trio looked into renovating a space to suit their needs; however, they decided it would be too costly to achieve the finished product they desired. So, a building was erected on the corner of County Road E and Highway 42 in Egg Harbor. The building that stands today, with its stucco walls, brick patios, and beautiful gardens, embodies the feel they hoped the restaurant would have – that of a building on a farm in France or Italy. The layout and design of the interior also suits their needs, creating the lively atmosphere for customers to enjoy the Old World recipes.

In 1993, a year and a half after the process began, Ronald, Jerry, and Mark opened the doors of Trio. The three fell into their respective roles easily – Mark and Ronald created the cuisine in the kitchen and Jerry supervised the front of the house, preserving the atmosphere. All of the planning and research paid off that first season. “We were overwhelmed the first year,” Mark said. “We tripled the amount of business we thought we would have.”

Not only have the three maintained their unique business roles over the years as well as their friendship, but “what Trio is today was the initial concept,” stated Ronald. Rather than making any big changes to their vision, in order to keep things interesting “we change the menu about once a month,” he continued. Although a few items stay the same, such as the Bowtie Pasta with Salmon or the Cassoulet Toulousain, the majority of the items on the menu change regularly as do the wine selections.

Even though the menu changes frequently, somehow Ronald, Jerry, and Mark have continued to receive constant, positive responses from their patrons. Mark is always amazed that, on the one night a week he covers the front of the house so that Jerry can have a day off, “people can’t say thank you enough for the experience they’ve had.”

The night I had hoped to set the foundation for this article, and in fact on all of the other occasions I have eaten at Trio, was exactly that type of experience. An overarching quality about the meal, the wine, and the atmosphere added to the character of the evening, yet didn’t overpower the simplicity of friends sharing time together. Perhaps it’s the fact that Ronald, Jerry, and Mark are such old friends themselves that they understand how to uphold this delicate balance. For my part, I think I’ll skip the “research” in the future and, like Trio’s other patrons, just enjoy.