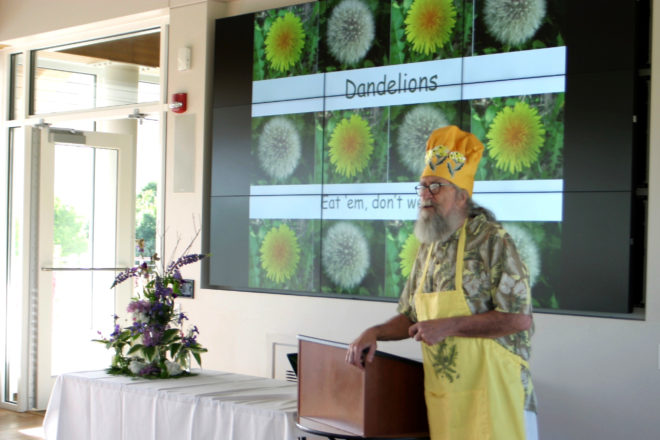 The humble ‘weed’ is elevated to superstar status

“Dandelion don’t tell no lies, Dandelion will make you wise. Tell me if she laughs or cries, Blow away dandelion”by the Rolling Stones

Yes, the Rolling Stones song “Dandelion” was careening through my brain pan as I sat down to enjoy the dandelion dinner presented by Door County Thrive at the Kress Pavilion on June 13.

Honestly, I didn’t know what to expect with this multi-course dandelion dinner. Other than kicking their yellow heads off while walking through a field or dispersing the fluffy seeds, the closest I’d come to dandelions was reading Ray Bradbury’s Dandelion Wine on acid while still a teenager.

As a lifelong fan of the underdog, I always respected the tenacity and beauty of the dandelion when so many others see it only as a pesky weed to be poisoned to death.

While not knowing what to expect, I looked forward to learning more about the much maligned spring plant.

I chose a table at the rear of the second story grand hall of the Kress Center because it appeared to be unoccupied. But the other five seats quickly filled with a congenial group of five women who hike together – Ann Johnson, Heather Andersen, Amy Jacobs, Carol Ash and Monique McClean. They said they had been on two walks – one a mushroom walk and the other an herb walk – led by our dandelion chef, David LaLuzerne, and he had invited them to the dinner.

We began with a pour of a 2018 vintage dandelion wine made by LaLuzerne. He said the wine is made with the yellow dandelion heads, which explained the yellow tinge to the wine.

The wine began with an earthy flavor, followed by sweetness that Monique McLean was convinced came from honey. A slight alcohol bite finished the taste. I decided I like dandelion wine.

An appetizer came next – crackers smeared with dark green dandelion pesto and a sliver of smoked whitefish. Yum! I had three, and each one tasted better than the last.

Between the appetizer and the first course of ramp and potato soup, LaLuzerne – a former pharmacist – paid tribute to the humble yet mighty dandelion and its many health benefits.

He explained that dandelion has been well known to herbalists and has been used for centuries used to soothe a variety of complaints – from digestive issues to joint pain to serving as an all-around spring tonic. He said it packs a wallop in delivering Vitamins A and K, as well as C and E to a lesser extent. It also contains high levels of Omega 3 and 6, potassium and, from the yellow florets, lutein. Lutein is a carotenoid vitamin known as the “eye vitamin” for its ability to help prevent eye disease.

LaLuzerne said dandelions are also a great diuretic “as effective as any prescription diuretic.”

He mentioned the famous forager Euell Gibbons, who in his 1962 classic Stalking the Wild Asparagus, wrote of a dandelion meal he made: “We had Dandelion Roots, boiled and buttered, Dandelion Crowns, both cooked and in a salad, Dandelion Greens, and tender developing blossom material cut from the crowns, cooked and seasoned. All this was washed down with glasses of Dandelion Wine left over from the former season, and we finished with cups of Dandelion Coffee.”

As a teenager, I owned Gibbons’ book and when in the wild, which was often back then, was always on the hunt for wild lettuce, which exudes a milky latex substance that supposedly has the properties of opium, so is also known as opium lettuce. I never found any.

Back at the dinner, bowls of the ramp and potato soup were delivered. It had been nearly two years since I’ve eaten a potato, so this soup tasted exquisite. I didn’t even notice the ramp flavor. Very welcome pieces of bacon also floated in the soup.

The dandelion greens were bitter, but not unpleasantly so, especially when recalling LaLuzerne’s mention of how bitterness aids digestion. The dandelion loaf should be on a menu somewhere, as should the dessert, a soft and tasty dandelion blossom cake served with mugs of roasted dandelion root tea.

The event was sponsored by Door County Thrive, which, according to the Thrive cards at each place setting, “builds ecoliteracy through community action.”

The evening came to a close with thoughts and dandelion photos from Sarah Evenson of The Dandelion Culture, which is dedicated to “cultivating a lifestyle of joy.” Evenson holds nature meditation sessions every other Friday morning at the Kress Pavilion.