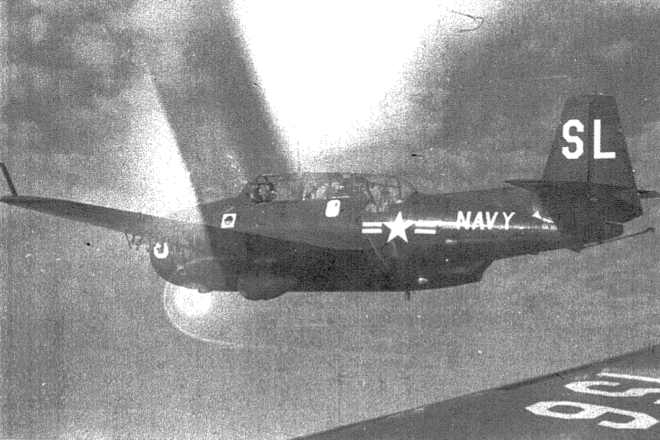 An example of the aircraft Curtis Mickelson was flying when he died in a crash over the Atlantic Ocean.

On March 26, 1951, Charlie Wright was in the ready room at the Naval Air Station off Cape Henry in Norfolk, Virginia, waiting to be sent out to relieve a team of two aircraft flown by friends who had been on patrol for almost three hours.

All three men were part of Air Anti-Submarine Squadron 22, or VS-22, of the Naval Air Force, Atlantic Fleet.

Cold War tensions between the United States and the Russians were growing. Wright explained that there was a constant need for ocean-surveillance patrols to know where Russian submarines were, and for training exercises to sharpen anti-submarine skills. It was a round-the-clock operation.

While in the ready room, Wright learned that instead of relieving his friends, including 22-year-old Curtis Mickelson of Sister Bay, he would be searching for them. Mickelson’s plane had crashed at sea about 100 miles from shore, and Wright would be dropping flares to light up the waters of the Atlantic Ocean.

The U.S. submarine Razorback was working with the VS-22 search aircraft on mock training attacks when the plane seemed to fly directly into the water.

“To search for and track submarines, one aircraft with high-powered detection equipment flies a pattern back and forth in a square 50 miles on each side, at about 5,000 feet,” Wright explained by email. “When it detects something that needs to be investigated, another plane – an attack aircraft, down near the water – is sent to investigate.

“That attack plane flies only by instruments to determine altitude above the sea surface in the black nights. There is nothing blacker than night a hundred miles at sea. These instruments are often unreliable from the corrosive salt-air environment, from age, from constant engine vibration and from hard carrier landings. The altimeter may be indicating 300 feet when the altitude is much less. The pilot in this case flew right into the sea.”

The submarine immediately turned on its own searchlight to try to maneuver about to look for survivors in the choppy sea. One survivor was spotted in the water, and the sub sent a person – tethered by a line – to the rescue. Just as he was about halfway to the downed airman, the searchlight went out and could not be relighted. In the blackness, the rescuer had to be pulled back. By the time another light could be rigged, the airman had disappeared.

All four crew members perished, including Mickelson: president of Gibraltar’s Class of 1946, the husband of Audrey McCummings and the father of Deborah. He had enlisted shortly after his 17th birthday, before he had his senior picture taken. His senior yearbook included a snapshot with fellow class officers Bill Bastian, Bruce Olson and Art Wilson.

Mickelson, an aviation electronics technician, third class, was one of 11 Door County men who lost their lives during the Korean War. He was awarded the National Defense Service Medal.

The Rev. Aymond Anderson and a Rev. Behrend conducted the April 1, 1951, funeral service at the First Baptist Church of Sister Bay, where Roger Isaacson, Glen Larson, Carl Johnson, Wayne Swenson, Marsten Anderson and Russell Sunstrom served as pallbearers. American Legion Post 527 participated in the service and burial at Little Sister Cemetery in the wind and snow.

Mickelson attended Appleport School at the corner of Old Stage Road and County ZZ, where he was selected to welcome crowds of up to 200 people to PTA meetings and was frequently honored for having perfect attendance. His seventh-grade classmates in 1941 were Carroll and Corrine Evenson and Roger Larson. His cousin Russell Sunstrom remembered him as a “wild and carefree boy who liked to ride his motorcycle on the sidewalk to scare people.” Appropriately, the 1945 Gibraltar yearbook said, “Curtis likes – showing off.” He gave his cousin, Betty Mickelson Holland, her first motorcycle ride on the bike, a 1937 Harley.

Though he played basketball as a junior, Mickelson’s favorite winter sport was ski jumping. Holland recalled that he was one of a group of boys who were taught by a man from Norway on a ski jump that had been constructed near Ellison Bay.

“The exciting thing for girls to do on Sunday afternoons was to watch them,” Holland said. “There wasn’t much else to do then.”

The ski-jump instructor, according to a newspaper story, was Sister Bay resident Anton Martinson, “the father of ski jumping in Door County.” There were clubs all over the county, and Mickelson, a member of the Ellison Bay Winter Sports Club, came into the annual tournament in 1943 ranked first among 18 early entrants. Two years later, he was again leading the field.

In February 1947, close to a year after Mickelson’s enlistment, his parents spent two weeks visiting him at the Philadelphia Naval Station, where, according to Wright, Mickelson was trained to operate the most advanced electronics equipment in the world. Mickelson returned home for a 30-day leave that December, and he and Audrey were married Jan. 21, 1949, in the Baptist parsonage in Elizabeth City, North Carolina. They had a daughter, Deborah, who was a year old when Curtis died.

Retired U.S. Navy Capt. Charlie Wright is in his 90s now, living in Virginia’s Shenandoah Valley at the base of the Blue Ridge Mountains, where he finished a career that took him to NASA as a consultant for spacecraft navigation systems and into helping to create a national wilderness area in the Shenandoah Valley. He said he often wonders what sort of life Mickelson might have lived had it not been for tragedy during a dark night over the ocean.

“Curt was killed in the prime of his life, serving his country in a very dangerous duty, never having had a chance to live life to the fullest,” Wright wrote. “We can only speculate about the societal contribution he may have made had he lived.”