How fortunate we are living so close to Rock Island State Park, a unique recreational park in many ways. It surely is beyond the so-called “tension zone,” where hiking ranks above cars and bicycles which are not allowed. The blissful peacefulness and quiet alone are worth the visit there. Add to that the wilderness aspect of much of the island, where both rugged rocky escarpments and shores, along with awesome sandy beaches and remote hiking trails are easily accessible to the hikers and campers, and you are experiencing one of the top state parks in the Midwest.

It’s easy to receive a good introduction to the 912-acre park in one day. Board your car on the first Washington Island Auto Ferry from Northport at 8 am and drive from the Detroit Harbor ferry terminal to Jackson Harbor on Washington Island to catch the first Karfi passenger ferry at 10 am. You’ll easily be on Rock Island by 10:20 am. The last ferry from Rock Island, heading back to Washington Island, leaves at 4:15 pm, providing you with at least six hours for some good hiking and exploration at the park.

The Karfi is now expertly captained by Jeff Cornell, third generation of the Cornell family seamen who have captained this durable little people ferry since its beginning. The schedule runs this year from May 28 to October 11. It now leaves for Rock Island daily from the state park dock at Jackson Harbor at 10 am, 1 pm, and 4 pm, returning from Rock Island at 10:15 am, and 1:15 pm, and 4:15 pm.

Charlotte and I, with our nature friends Don and Beth from Kenosha, recently spent a day on Rock Island with several goals in mind. It was our friends’ first trip to the island, so the historically exciting and incredible Thordarson boathouse and Viking Hall had to be seen first. Next we felt it would be important to hike the 1-1/2 mile Thordarson Loop Trail north of the boathouse to see the Pottawatomie Lighthouse, the first lighthouse in Wisconsin and third on the Great Lakes, dating back to 1836, that is now open seasonally to the public for free tours. What pleased us immensely was discovering so many mushrooms along the trail to enjoy and photograph. 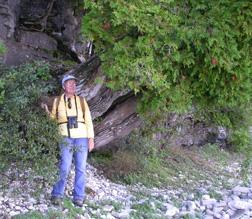 Charlotte standing next to a giant White Cedar on the north beach of Rock Island. Photo by Roy Lukes.

It was noon by the time we reached the wonderfully restored lighthouse, brimming with fascinating history, where we ate our small packed lunch before heading down the long flight of stairs to what we feel is one of the most beautiful and rugged rocky shores in the state. Here one can see some truly ancient White Cedar trees clinging precariously to the steep escarpment, often developing very strange shapes in order to survive.

Earlier we had told our friends that one of the interesting and rare plants we’d see during our hike was the Mountain Fringe, a delicate flowering vine that is of special concern in the state. Earlier this summer on the island we had seen and photographed this seldom experienced plant growing along the very top of the wheel-like root systems, around six to eight feet off the ground, on several huge tipped-over Red Oak trees. Imagine our surprise, while photographing some small mushrooms close to the ground, to find some of the Mountain Fringe vines, complete with flowers in full bloom, growing less than a foot above the ground. Later we talked with the park naturalist who told us he had never seen the plant other than at the very tops of the tipped-over oak tree roots.

Kirby Foss, Rock Island State Park manager, had told us during an earlier visit to the park of the large area along Fernwood Trail that had never been logged and was considered to be an old growth forest. He immediately sparked our interest, so one of our goals today was to hike that pristine wilderness trail to locate and measure some large potentially record-size trees for Door County. Yes, there were mushrooms galore along this trail too so we’d stop to enjoy, study and photograph some, then look up in awe at the unusually tall and large trees bordering the trail. The largest ones were the Red maples, some having trunks around ten feet in circumference. This pattern of “look down for mushrooms, then up at the trees” continued for nearly the entire 1.2 mile Fernwood Trail.

It was around a half hour before our return Karfi ride to Jackson Harbor when we completed our exciting nature hike, so we rested, relaxed and enjoyed the beautiful towering clouds over the bay. Earlier that day, upon our arrival to the park, we were interested to see so many people with their camping gear waiting to board the Karfi for their return trip. Several of what appeared to be seasoned Rock Island campers, realizing that the distance from the ferry dock to some of the campsites involved quite a long hike, used small wheeled carts for transporting their gear. For those staying overnight, any of Rock Island’s 40 campsites may be reserved, and all provide picnic tables and fire rings.

There are few buildings that have excited me more during my lifetime than the great Viking Hall Boat House on Rock Island, which stands as a monument to a rich history of Scandinavian folklore and especially to the history of Chester H. Thordarson, a pioneer in the field of high voltage electrical equipment. In case you haven’t been to Rock Island, surely you will thoroughly enjoy this massive building and its incredible contents listed today on both the State and National Registers of Historic Places. 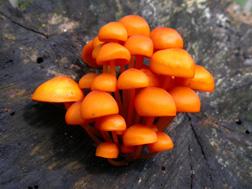 A group of Orange Mycena mushrooms on a cut log along the trail.

With Charlotte’s expert help, along with our friends’ sharp eyes, we found 43 different species of mushrooms, looked up in amazement at many gigantic trees, some of which we hugged, hiked pristine trails, enjoyed the crisp cool air on a sunny day, and are already planning our next adventure to Rock Island State Park.

Charlotte Lukes will lead a Mushroom Hike at Whitefish Dunes State Park Saturday, Sept. 25 at 9:30 am. Participants should meet at the nature center for the two-hour hike. Charlotte will also present “An Introduction to Mushrooms” program at Newport State Park on Sunday, Sept. 26 at 2 pm. Both programs are free, though a park sticker is required.