It’s about 3:00 am when, on the road outside the Baileys Harbor Marina, I step up into Bobby Schultz’s snowplow. It’s dark, cold, and I honestly wish I were at home sleeping.

But here’s Bobby:  sitting in his big orange behemoth of a truck with a giant smile on his face and a large Thermos of coffee on the floor of the truck’s passenger side.

“Hey, buddy,” he says, “good to see you.” He’s chuckling as I climb into the plow’s passenger seat.

And I know then that I’m in for a treat. 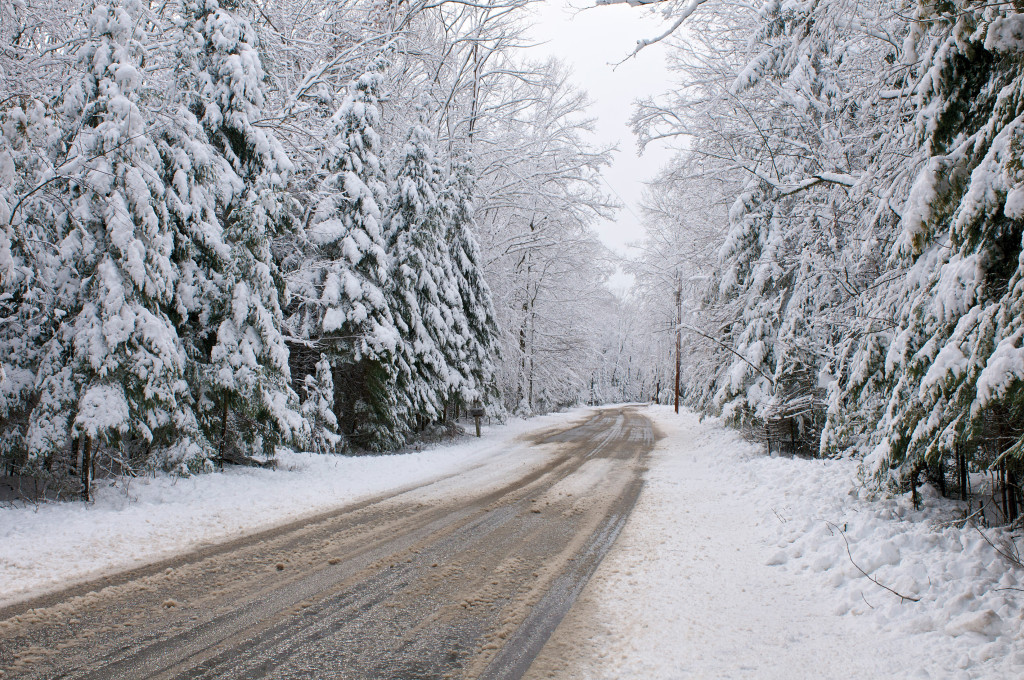 Bobby’s been driving heavy equipment for the county for 23 years, and he’s been in a plow for seven of those. This morning we’re plowing Bobby’s usual route, which is a portion of Highway 42, a couple county highways including County Q, and the local roads in the Town of Baileys Harbor.

The snow is coming down fairly heavily and there’s a 40 mph wind that’s blowing everything around. You can see out of the truck, but visibility’s not the best. There is definitely a storm happening around us.

Bobby’s telling me stories and driving with the window down to get some fresh air. He’s not nonchalant or unconcerned; he just knows exactly what he’s doing. He knows when to toggle what switches to adjust the plow exactly to his liking. He knows to start throwing down sand rather than salt because it won’t blow around as much in the wind.

He does all this without breaking verbal stride. It’s second nature to him.

So we cruise at about 25 mph down the highway (Bobby says it doesn’t pay to go much faster than that), and Bobby gets around to telling me what I think is his favorite plowing story. It’s not a story about a big mishap or the worst storm the county’s ever seen.

It’s a story about a boy in an ambulance who desperately needed to get where he was going during a rough winter storm.

Two mechanics from Sturgeon Bay were working in the county’s Sister Bay shop when a call came in to take a little boy to the hospital in Green Bay. The two mechanics, Bill Price and Rollie DeLair, took to the road to clear the way for the ambulance.

That, says Bobby, is what keeps him going at six in the morning when the sun is just coming up and he’s feeling a sluggishness that not even the giant Thermos of coffee can shake off. There are times when people absolutely have to get where they’re going. Other times, it’s just nice for the roads to be clear at a decent time.

Either way, someone has to do it. 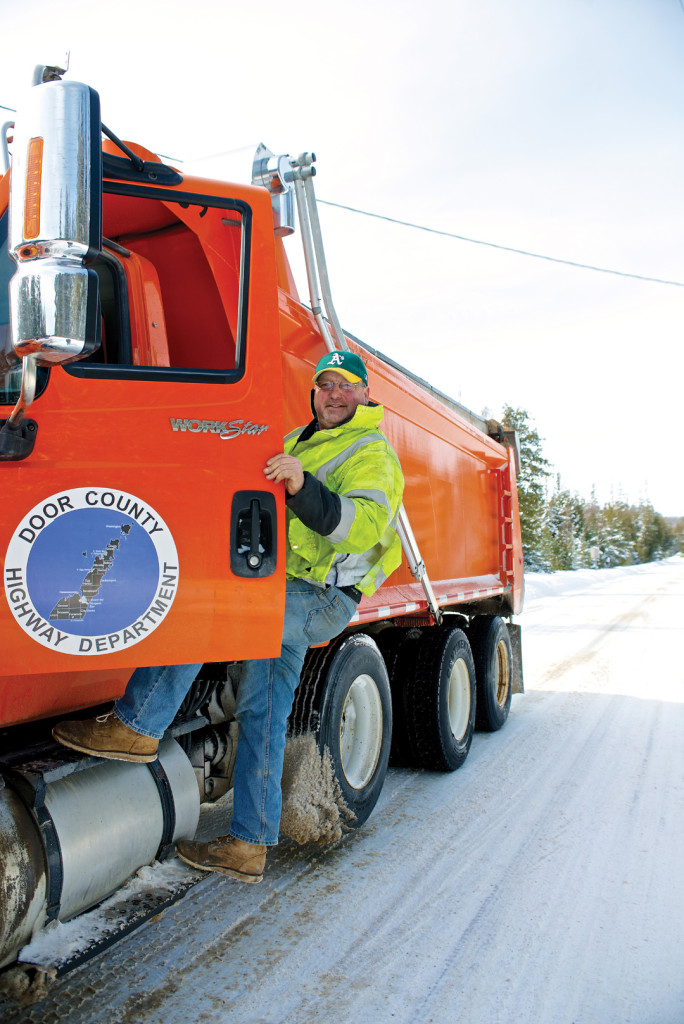 Bobby Schultz steps into his rig in Baileys Harbor. Photo by Len Villano.

It’s at about this point in time that I realize I have no idea where we are. We were on County Q, but at some point we took a detour to go help out with another plow’s route. I lost all sense of direction somewhere in between, and here in the snow and the dark there aren’t too many landmarks in clear view to help me out.

Bobby knows where we are, but he says that sometimes – when the snow is really coming down – even he loses track of his exact position.

“When that happens,” he says, “you just keep plowing.”

As we get back onto Bobby’s normal route, he tells me some more lighthearted stories. Stories about the times he was stuck in the plow (yes, even snowplows get stuck) or the times he’s done battle with the county’s many hills.

Hills, it turns out, are the worst enemy of the snowplow and the snowplow driver. Going up them, yes, but especially going down them. Especially when there’s ice.

“I’ve gone down the Sister Bay hill sideways,” says Bobby. “I’ve had a couple times that happened. So yeah, I’ve had some experiences.”

Now, about two hours after I climbed in Bobby’s truck, so have I. But it’s 5:00 in the morning, I haven’t slept, and I have to go to work in about four hours. While Bobby’s as chipper as ever, I’m dragging.

So when we pull back through Baileys Harbor, Bobby drops me off where he found me. He’s been on the road since at least 2:00 am, and he’s probably going to be out until 9:00 or 10:00. He’ll then go out again later in the day to make sure everything still looks okay.

But he’s not thinking of any of that right now. Right now he’s watching to make sure I make it safely down the steps of the plow.

“Take care, buddy!” he says, raising his voice to make sure I can hear him over the rumble of the plow’s engine.

And then he’s off again, the orange light atop his plow cutting into the darkness and bouncing off the snow.

The Winter That Wouldn’t End

You can ask the Door County highway crew and they will tell you last winter was one for the records.

Their season began on Nov. 25, 2012, with an average snowfall of two inches across the county. That was followed by 52 other snow events for the department, with a variety of winter conditions that included snow, drifting and ice.

The highway department snowplowing consists of 29 pieces of equipment that respond to the 269 lane miles of state highway, 590 lane miles of county roads, and 1,174 lane miles of town and village roads. In total the department performs snow and ice control on 2,033 lane mile 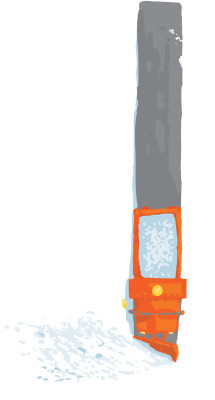 All of the emergency response is performed by a crew of 34 staff members who do everything from operate the equipment to perform repairs and maintenance.

Thad Ash, patrol superintendent, records the data from each storm for accounting purposes. The following are some of the statistics from the last winter season.

During 53 winter events, crews working the state highway system logged 1,044 regular hours, 1,445 overtime hours, spread 4,458 tons of salt and 37,758 gallons of anti-icing liquid. The Wisconsin Department of Transportation has established guidelines, which are followed on how and when the highway crews respond on the state system.

Highway crews logged 4,893 regular hours, 3,952 overtime hours, spread 4,281 tons of salt, 4,944 tons of sand/salt mixture, and 38,404 gallons of anti-icing liquid. The weather forecasts are monitored extensively by this department during the winter season. The four supervisory personnel in the department rotate on-call duties on a weekly basis. These on-call personnel make the determination where and when crews will respond to a winter event. The sheriff’s department’s patrol staff and communications center staff becomes the highway department’s eyes and ears throughout the season and especially during overnight and off-hour times. It is the dedicated and tireless efforts of these deputies to ensure the safety of the roads as well as the highway department working hand-in-hand as a team.

Editor’s note:  An earlier version of this story incorrectly credited Bobby Schultz with plowing the way for an ambulance to get to the hospital in Green Bay. The plow drivers were Bill Price and Rollie DeLair, not Schultz.