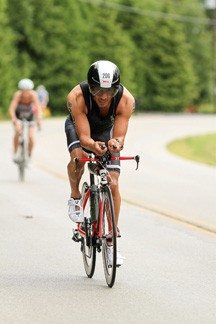 “In some ways, drug addiction and endurance sports are similar; they both take you to this strange place, far outside usual reality. But it’s more complex than that. Drug addiction and alcoholism take you in a very dark, confining direction; endurance sports always transport you to a new landscape, a new part of the world, where you embrace the outdoors with other people; you learn to go past what you thought your limits were…” ~ Charlie Engle, former addict and professional ultramarathon runner

It takes a certain kind of person to jump in the pool before the sun rises and hit the track while the sun sets, using what would otherwise be relaxing weekends to squeeze in long bike rides and runs. 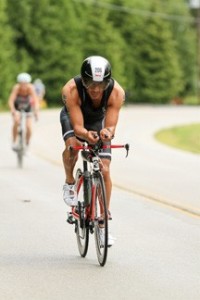 Endurance athletes are often said to have Type A personalities, with excessive drive, urgency and anxious behaviors. But there is another brand of people that express these traits, and their two worlds collide more often than you might think.

“Even though I’m sober, I still think like an addict,” said Tony Gonzales. On Aug. 8, the Sister Bay resident competed in the USA Triathlon Age Group National Championship in Milwaukee alongside more than 4,000 athletes from across the country. But Gonzales wasn’t living the active and competitive life before he found the sport in 2013.

“My life revolved around getting high,” said Gonzales. “I bartended four nights a week and that was just enough money to get what I needed. I ingested pretty much anything. There was a lot of cocaine there for a while.”

Taking first place in the 50-54 age group of the Door County Triathlon this year, Gonzales is one of a quiet few who have used the sport as a launch pad for getting sober. He describes his recent hobby as extreme, but maybe that is the reason it works in the first place.

Alcoholics and drug addicts are extreme by nature. The ability to diffuse destructive but impulsive desires varies between everyone. The psychology of human nature that begs us to repeat behaviors that are pleasurable makes everyone vulnerable to addiction.

Addiction does not have to focus on a substance or behavior that is viewed negatively. Any activity done to the extent that it interferes with normal life can be described as an addiction. In general, society looks on exercise with approval. But when relationships, work and health suffer as a result from finishing a workout, the idea of exercise addiction creeps in.

The emerging studies diagnose exercise addiction with terms such as withdrawal symptoms, tolerance and relapse. In a survey study from Nottingham Trent University, the questions posed to athletes could swap the words “exercise” and “drink/drinking” and then be given to alcoholics.

• I exercise despite recurring physical problems

• I exercise to avoid feeling anxious

“I don’t like that word addiction put in something positive because it’s almost a negative word,” said Gonzales. “How about, ‘He traded his addiction for something he is passionate for.’ That makes me feel better if someone were to say that. I think people who don’t understand addiction would say, ‘He found one addiction for another.’ I took offense to that at first but it doesn’t matter what anyone says.”

During exercise, the brain releases dopamine, a chemical associated with feelings of pleasure and also linked to drug use. The release of dopamine and post-exercise endorphins can serve as the substance that athletes seek.

In two independent studies, animals more frequently rejected doses of morphine and amphetamines when they exercised. Exercise produced a feeling that filled a void that would otherwise encourage substance abuse.

Mark Smith, psychology professor at Davidson College, told CNN this trade of addictions is a good thing. “One of those addictions leads to basically a devastation throughout all aspects of your life and probably premature death,” he said. “The other addiction leads to improved cardiovascular health, better self-esteem, better self-efficacy and maybe some joint problems when you get older. It’s an apples-and-chainsaws comparison.”

But not everyone believes in this trading of addictions, primarily those who suffered through the transition. Former alcoholic turned best-selling Kindle author Mishka Shubaly describes in his first book, The Long Run, that, quite simply, drinking was easy and running was hard.

Rich Roll, another former alcoholic turned endurance athlete and wellness advocate, explained in an interview with biographile.com that addicts are just people who are seeking answers. “When you take away the drugs and alcohol, that seeking continues. It just gets channeled into healthier outlets. It’s common to pursue other extreme things.”

For Gonzales, it was the regimented training schedule that kept him on track after he got sober in 2009. Leading up to his hospital detox and stint with in-out patient rehab, the required drives to Sturgeon Bay gave him something to do. But before he elected to get sober and well before he ran his first mile, he lived a blurry life.

“Every night, I wouldn’t fall asleep, I would pass out. I didn’t know how to fall asleep,” he recalls. “Every evening I would look in the mirror and say, ‘Ok, tomorrow you have to stop drinking.’ But I could not do it. I would wake up the next morning and I would be shaky. I was so mad at myself because I could not stop.”

While Gonzales’ father struggled with alcoholism during his childhood, he has been sober for 30 years. But Gonzales still can’t pin his habit on just one part of his life.

“In meetings, a lot of people find out why they drink, whether it be abuse or something happened. I don’t think we ever got to that,” he said.

He had been drinking hard most of his life, but in March 2001 his habit took a darker turn when his older brother fell through the ice in Ephraim and died.

“Johnny was not just my brother but he was my best friend,” he said. “At that time I took it to another level, which I didn’t think I could do. That was the beginning of the end.”

For the next eight years, he would go a day or two without drinking before submitting to his addiction again. During rehab, he was afraid to leave the safety of a hospital bed while also despising the company of people who offered to care for him.

“When you get sober you want to take a magic pill and have everything be right,” he said. “But it took a long time to mess a lot of things up so I had to build friendships again.”

One of those friendships was with his wife, who refused to have him in the house in the years leading up to his recovery. The fractured relationship was beyond saving even after he got out sober, leading to their divorce in 2011.

“When I got sober, I got sober for the wrong reasons,” he said. “I would get my house and my wife back. That was the only reason I quit drinking. When I realized that I wasn’t moving back home and I was getting a divorce, I knew this was serious.”

But life on the sober side got a little better with every day that went by. When he found triathlon in 2013, he also found a new high.

“Going to nationals and finishing the Olympic race… I never got a high like that from anything I put in my stomach,” he said. “Having this schedule and this regimen with triathlon keeps me in a place that I love.”

Now, Gonzales has his eye on the World Championships, which would require him to finish in the top 25 in his age group at the national championship event in Omaha next year. Despite these goals, Gonzales knows his past is not too far behind him.

“I’m not cured. I’m OK today and I think the exercise part of it makes life a lot easier,” he said. “As long as I keep doing what I’m doing, I’m happy and I just gotta be careful to not stray from that. I found something that works for me. I think something athletic plays a big part in sobriety. I know it has in mine.”