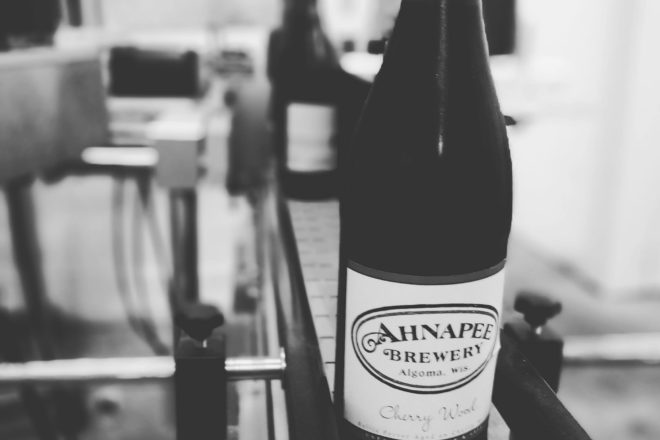 Nick Calaway has had a beer idea fermenting in his head since 2016, and on Saturday, Dec. 1, you’ll have the chance to taste the delicious result at Ahnapee Brewery in Algoma.

Thoughtful brewer that he is, Calaway had the idea of introducing a well-known local product in a unique way, hence the creation of his special winter release Cherry Wood, a 10-percent Baltic porter infused with cherry wood.

Plenty of cherry beers out there, Calaway thought, but how about cherry wood beers? So he started calling area orchards and learned there is only one time of year when cherry wood can be collected, and that is when they are pruned while still dormant in late winter or very early spring.

“I contacted a bunch of orchards, and Glen (Musil) at Choice Orchards said he’d help me out,” Calaway said. 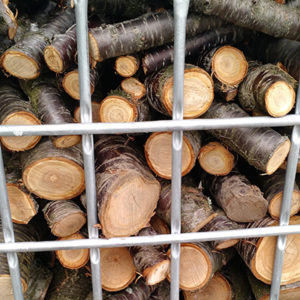 Musil said while he oftens sells cherry wood to people who want to use it for smoking while grilling or incorporating it into liquid smoke, Calaway’s request for green cherry wood to brew beer with was a first.

Calaway loaded a trailer with the cherry wood and let it sit outside for most of 2017, until snow started flying. The wood was moved inside to continue drying for the winter, and then Calaway cut the wood into small discs that he brought home to kiln at a low temperature in his oven.

The toasted cherry wood discs were then placed in nylon bags and added to fermenters holding a Baltic porter made earlier this year.

“We made several pins [a five-gallon keg] to get the toast level correct,” Calaway said. “The finished product is probably version six of toasting. It’s the toast level I enjoyed the most.”

After talking about it, a taste was in order from a freshly labeled bomber bottle.

“It’s very unique wood, cherry wood,” Calaway said as we both sniffed at the glass before tasting. “When we’re cutting and toasting the wood, this is the smell. It’s subtle when blended with the beer. It’s not oak. It’s not a wine barrel or whisky barrel, but it has some similarities. Super gentle, rich but not too sweet. You get that really nice cherry wood flavor through the nose and on.”

I note that it has a silky feel.

“We put a good amount of oats and flaked barley in it, which builds up that protein layer, nice and soft,” Calaway said.

Chocolate notes abound and on the finish is a distinct but subtle fruitiness. I keep waiting for the wood tannins so obvious in wood-aged beers, but that is absent from this easy drinking Baltic porter.

Diving in a little deeper, this is a bold beer with big luscious chocolate tones, even a hint of coconut, dark fruits stewed and a tart fruitness (cherry) on the end. So many things going on in this beer. The choclatiness seems to linger forever, and the cheery cherry tang on the end is undeniable as the beer warms.

He entered Cherry Wood in the barrel-aged category at the World Beer Championship earlier this year and earned 93 out of 100 points, worthy of a gold medal. 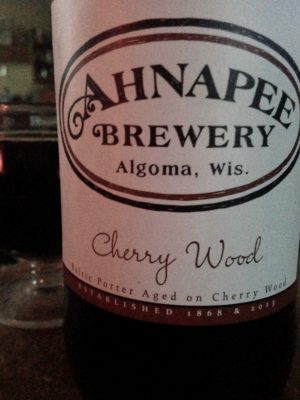 When it goes on sale at noon on Saturday, Dec. 1, Cherry Wood will be available on draft at the tap room and in bomber bottles. Because he knew in advance that this beer was going to be a hit, production was doubled.

“This is the most we’ve ever done for a large beer,” Calaway said. “We typically bottle about 35 cases, but because of the award and how good I think it is, we ended up doing 75 cases. We did two back-to-back batches. I’m excited to see how well it goes.”

He and his crew were also able to use a new labeling line that speeded up the process. “We hand bottled and labeled 75 cases in about 55 minutes, which, for us, is an incredible feat. Typically it would be six cases in a little more than a half-hour.”

“Brut Force, the yearly release, will be the last bomber bottle. From now on our big beer releases will be in 12-ounce bottles [in four packs]. To open this,” he said, referring to the 22-ounce Cherry Wood bottle we were sharing, “you have to be sharing it with some friends, as opposed to a 12-ounce, where you get home from a hard day at work and say, I deserve one. And you have three bottles left.”

If you go on Dec. 1, you might also want to pick up a bomber of It is Brett, a yummy, wine barrel-aged sour. It’s a magnificent ale brewed with brettanomyces. The sourness is subtle and delicious.