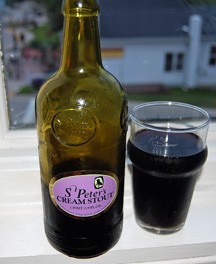 It had been a long week and I felt like I deserved a treat, so I closed my eyes and reached into my beer “cellar” (the bottom row of my fridge) and pulled out, ta da, a bottle of St. Peter’s Cream Stout from St. Peter’s Brewery at St. Peter South Elmham, near Bungay in Suffolk.

I forget when I first ran across this beer. The brewery has been around since 1996. The beer was originally issued in a very distinct green, oval-shaped bottle that was a copy of an 18th century brewer. The bottles are now round, but still quite distinctive, like something you might find in an antique store.

It pours with little head. Big dark chocolate flavor right off the top. Then a little molasses and a dry coffee finish. Big, bold and unabashed all the way through.

This British upstart makes a bunch of interesting beers, but I’ve only seen a few varieties here.

I would love to try both the Grapefruit and Honey Porter beers of St. Peter’s. The website proudly states that they have no problem mixing fruit and honey with beer, as many an adventurous brewer did back in the pre-mega-brewing days. Check out the website at stpetersbrewery.co.uk.

Things went so well with the St. Peter’s Cream Stout that I decided to stick my hand yet again into the beer cellar the next night and pulled out another plum – Hitachino Nest Sweet Stout. 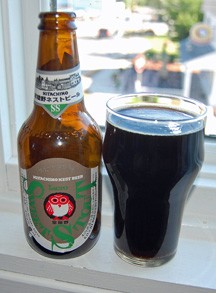 I developed an appreciation for Japanese beer while living on Maui during part of the Reagan years. Only later did I learn – although I should have known – that the Japanese go to the heart of matters when they turn their attention on something. Back in the early part of the 20th century, one of the great Japanese brewers wanted to get into the lager business, so hired August Groeschel, a Wisconsin brewer. August was, like his father before him, a maltster by trade, but he also absorbed the technology and engineering of malting and brewery, skills that were used at the Walters Brothers Brewing Co. in Menasha, Wis., for a decade that ended in 1912 when he took a position with the Duluth, Minn., Brewing and Malting Co., where he remained until 1917; with Prohibition looming in America, he took an offer to set up a brewery for Kirin in Japan. So today, Japanese lagers are the closest thing you can get to good German lagers outside of Germany.

The point of all that being, I expect nothing but the best from Japanese brewers. This deliciously soft sweet stout is brewed with pale, crystal and caramel malts and, for both the sweetness and softness, 10 percent lactose (milk sugar). This brewery calls it Sweet Stout. It used to be known as Milk Stout in England but some PC twit objected to the term so the venerable Mackeson Milk Stout is now simply labeled Mackeson Stout. How sad!

The Kiuchi Brewery makes Hitachino Nest Sweet Stout (I don’t know what the nest stuff is all about…the labels feature an owl). The brewery has a website in English. Check it out at kodawari.cc/?en_home.html.