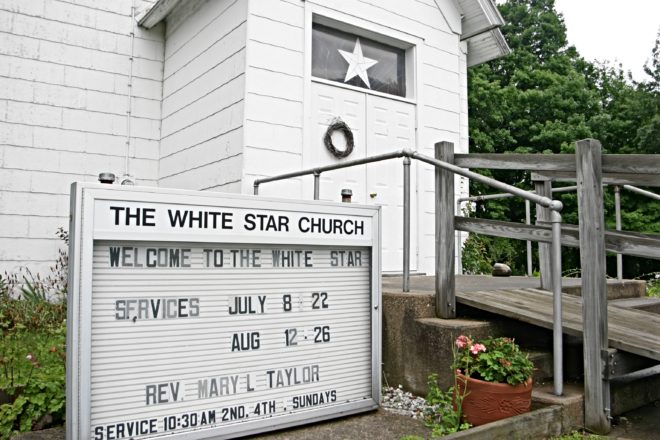 The White Star Psychic Science Church on County C in Gardner meets the second and fourth Sunday of every month from Palm Sunday to Thanksgiving.

It was as if an occult hand opened a Spiritualist portal to Door County on June 22, 1885.

That was the day of a religious showdown — it was called a “religious war” by one newspaper of the time — between a Catholic priest and a former saloonkeeper-turned-Spiritualist that resulted in the birth of a Spiritualist church that operates to this day on County C in the Town of Gardner.

On one side we have Reverend Louis Delwiche Stevenart of St. John the Baptist Catholic Church in Gardner, and on the other former tavern owner and converted Spiritualist John B. Evearts.

As the story goes, Evearts’ wife was seriously ill and doctors gave her no hope for survival, so he consulted a Spiritualist healer, who not only cured Mrs. Evearts but also identified the saloonkeeper as someone who could tune in to the spirits, but only if he gave up selling the other kind of spirits. He sold his tavern and devoted himself to Spiritualism. 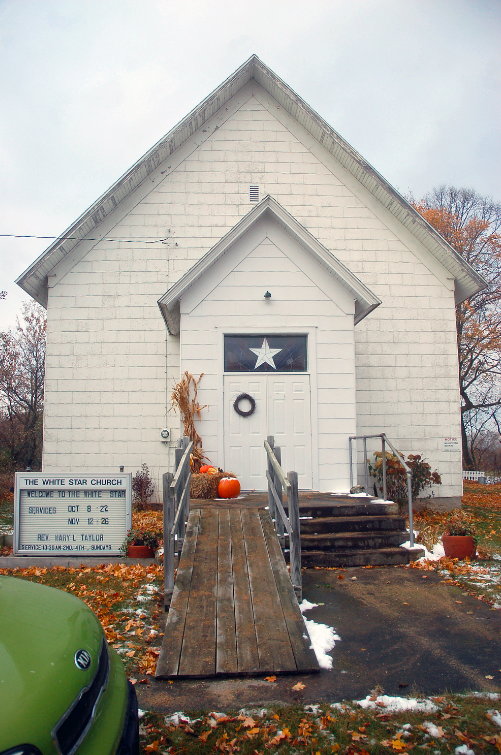 Evearts is said to have been of Belgian heritage with relatives in Gardner, which is what brought him to Door County in 1885 to conduct Spiritualist services in private homes.

Word of the seances reached Fr. Stevenart, who proclaimed that no one can talk to the dead, which prompted Harris Duchateau, a Green Bay follower of Evearts, to put up $1,000 (the equivalent of $25,000 in 2018 dollars) if the priest could prevent Evearts from communicating with spirits.

The date and time of the showdown was set for June 22 at “ten o’clock in the forenoon,” at which time Evearts would conduct a seance at a private home, and the priest was welcome to attempt to prevent him from communicating with spirits.

“At the appointed time several hundred people had assembled to witness what was to many of them a strange and singular performance,” read a July 7, 1885, newspaper report. “Ten o’clock came and went but no priest…”

A messenger was dispatched by horse and buggy, and the priest was persuaded to return to the scene with the messenger.

“When the priest finally did put in an appearance he positively declined to perform that which he had previously boasted of; but on the contrary denounced and berated those present in unmeasured terms,” the newspaper account goes.

Some of the parishioners present were so turned off by the priest’s performance that “about forty of whom forthwith renounced all allegiance to the church and joined the ranks of the Spiritualists. In the meantime the offer of one thousand dollars still stands and the medium is looking elsewhere for new worlds to conquer.”

Three years later, in 1888, followers of Spiritualism built a church that continues to provide Spiritualist services. The White Star Psychic Science Church on County C in Gardner meets the second and fourth Sunday of every month from Palm Sunday to Thanksgiving. Rev. Mary L. Taylor is the current pastor.

The fourth of the nine tenets — or Declarations of Principle — of Spiritualism declares:  We affirm that the existence and personal identity of the individual continue after the change called death.

That is followed by the all-important fifth principle:  We affirm that communication with the so-called dead is a fact, scientifically proven by the phenomena of Spiritualism.

Like the American suffragette movement that traces its history back to the 1848 Seneca Falls Convention in upstate New York, the Spiritualist movement, too, was born in upstate New York in 1848, only 25 miles away in a place called Hydesville. There, a family by the name of Fox believed they were haunted by spirits. 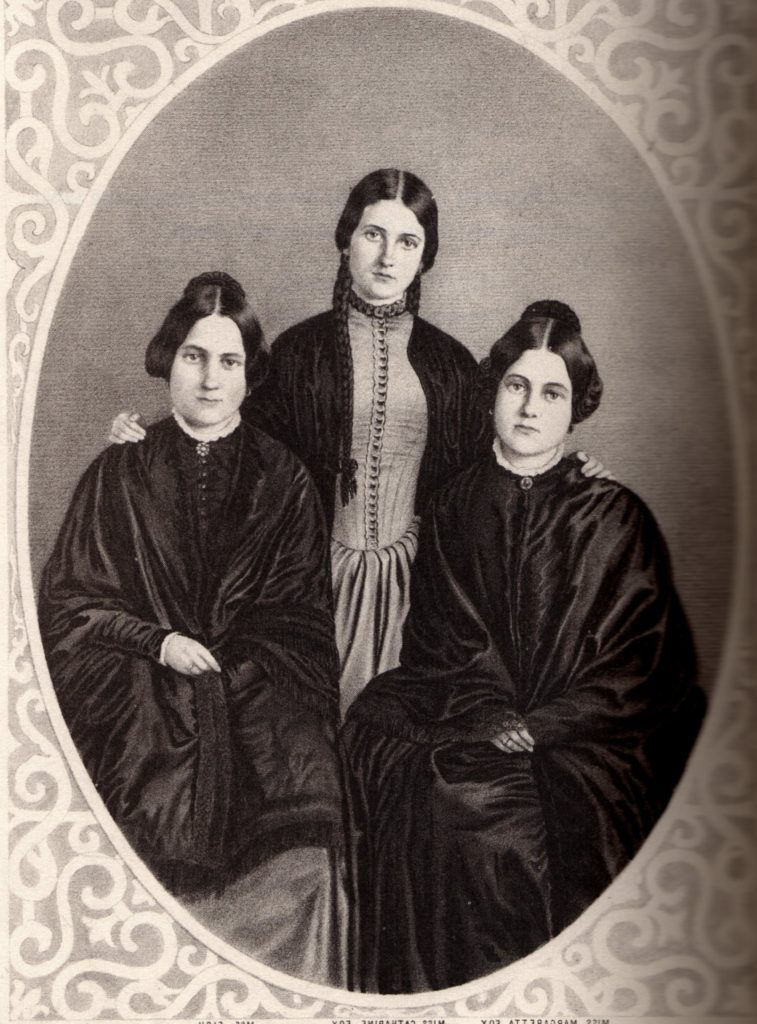 It all began on March 31, 1848. Note the date. That evening the family invited a neighbor into the bedroom where all four members of the Fox family slept (an older sister was married and lived in Rochester). Mother Margaret Fox began asking the “spirit” in the house to commence rapping in response to questions, which it did.

The Fox family eventually abandoned the home because Margaret Fox was convinced the family was being haunted by the spirit of a peddler who had been murdered and buried on the premises. The two girls, Maggie, 14, and Kate, 11, were sent to live with their older sister Leah, where they continued to rap with spirits for invited guests. Eventually the three sisters moved to New York City, where they continued their spirit conversations with prominent members of New York society, including author James Fenimore Cooper and poet William Cullen Bryant. The sisters became shining stars of the new Spiritualist movement.

“During the time of Abraham Lincoln, one person in every household was a spiritualist,” Emmy Award-winning journalist Jenniffer Weigel said in a telephone interview. “During the time of the Civil War where there was so much loss and so much grief, people were disappointed in their churches and were looking for something else.”

Weigel began investigating Spiritualism in 2001 after she lost her father to brain cancer.

As she explains in the preface to her 2017 book Psychics, Healers and Mediums:  A Journalist, a Road Trip, and Voices from the Other Side, after her father died, Weigel “quickly realized that grief is a very pricey business.”

“So I went on this journey,” she said. “I thought it was all made up and I thought I would be writing a handbook for how people could not get ripped off. That was my initial reason for diving into Spiritualism at all.”

She went into her first meeting with a medium with the tools of her trade — notebook, video cameras and audio recorder.

“I was going to swoop in and maybe disprove it all,” she said. “I left there scratching my head with more things I couldn’t explain. So that made me continue to ask questions.”

That brought her to the Spiritualist community in upstate New York known as Lily Dale, where two different mediums connected her to her late mother-in-law with enough details that only she and her mother-in-law could have known to convince her that something was going on.

That got Weigel thinking about the birth of Spiritualism in upstate New York in the middle of the 19th century.

“Women weren’t allowed to practice religion, they weren’t allowed to speak outside of the home unless the husband agreed they could speak. Women had no rights,” Weigel said. “Part of me believes that some of this bloom in Spiritualism — and this is just my totally unprofessional theory — is I think women were so frustrated with the inability to speak, many pretended to be mediums just to have a platform. They had some stuff to get off their chest.”

But not all of them were true mediums.

“There were a lot of frauds,” Weigel said.

Which is probably a good place to return to the story of the Fox sisters. Forty years after the sisters began their communications with the spirit world, on Oct. 21, 1888, middle sister Maggie took the stage of the New York Academy of Music to confess that she and her sister Kate had started a hoax on that eve of April Fool’s Day 1848. She confessed to an audience that they began by dropping an apple on the floor for the rapping, until they learned to crack various knuckles in their toes and fingers.

To prove the point on stage that night, Maggie removed the shoe from her right foot, placed her bare foot on a stool and proceeded to crack the knuckle of her big toe. She claimed that older sister Leah knew of the hoax all along and exploited her younger sisters for personal gain. At least one newspaper of the day declared Maggie’s confession “a death blow” to the Spiritualist movement.

Obviously, Spiritualism did not die. In fact, it got another huge boost during World War I when so many young men were lost, leaving family members eager to reconnect through psychic mediums.

It was during this second major boom for the movement, in 1920, that Door County voters elected a Spiritualist to represent them in the Wisconsin Assembly. John Peltier (1861–1947) was a logger, farmer, commercial fisherman, and the first member of the state Assembly to declare Spiritualism as his religion.

Born in Michigan in 1861, his family moved to Sturgeon Bay in 1868. He helped organize and served as first president of the Fisherman’s Association of Wisconsin. He served as a Door County supervisor and as town chair of Gardner from 1907 to 1915, and then served two terms in the state Assembly, beginning in 1920.

In a 1921 interview with the Wisconsin News, Peltier said his spirit counselor was a 15th century lawyer from Dublin, Ireland, by the name of Patrick Reilly, who communicated only in French to Peltier’s neighbor, Alex Dewissiger, who was the spiritual leader of 42 families in the vicinity of Brussels that organized under the name the Spiritualists’ Philosophical Society.

Peltier told the newspaper that folks back in Door County were well aware of his long-held belief in Spiritualism (he said he had been a believer for 33 years), and voted for him because he is an honest man.

Peltier went on to say he had “mental” communication with his three dead children, as well as having witnessed the materialization of dead friends and relatives, and had seen seemingly incurable ailments cured in consultation with the spirit of an eminent American surgeon called Dr. Green. In fact, Dr. Green had advised Peltier to act to repeal a state law that required smallpox vaccinations for school children. He believed the inoculation was harmful.

“We receive constant warning from the spirits against the hazards of vaccination,” Mr. Peltier said.

Peltier’s bill to end compulsory smallpox vaccinations was rejected 22–9 by the Senate.

His Irish spirit also guided him to become an advocate for the dry movement. In fact, Peltier said he had been puzzled by the issue and at first had been in favor of beer and wine until his spirit guide told him if you give people weak liquor they will demand stronger drink.

“It had to be one or the other, prohibition or liquor, and I was advised not to run the risk of danger to my soul in voting for liquor,” he told the reporter.

Peltier, who died in Fish Creek at the age of 86, apparently maintained his belief in Spiritualism to the end for his Dec. 12, 1947, obituary ends with this sentence:  “A Spiritualist pastor from Milwaukee is expected to be here to conduct the rites.”

So, the big question:  Is there something beyond this physical plane of existence?

“We do have proof — audio, digital, video proof — I feel that shows beyond a shadow of a doubt that the soul goes on, lives on,” Weigel said. “I have interviewed dozens of medical doctors who claim they have evidence the soul can communicate with us. I’ve interviewed a lot of people who have had near death experiences or studied them extensively and there is evidence there is something going on.”

She compares it to radar, that we are all sending signals, but some are better than others at picking up those signals.

“The search for actual data continues,” she said. “The search for people who are wired different from me. I’ve found a lot of people who have impressive intuitive abilities. My search now is to help people understand their own intuitive abilities. That we are all radars, that we don’t have to go outside of ourselves to get proof that our loved ones are with us and sending us signs and signals. That is my belief.”