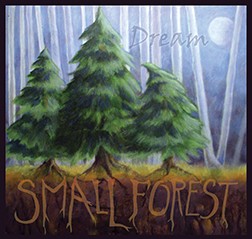 Any organization intent on growing its support network knows the most important element of appealing to the masses: a strong mission statement out front for all to see. This does not necessarily apply to musicians or bands, but Door County trio Small Forest decided to employ the rule anyway in the opening song (“Forest Song”) of its debut album Dream.

“Shouldn’t we be a forest? Each a tree? Can’t something shine with hopeful light, and take away lonely.”

This reach for building community is the foundation of Small Forest, the mother-daughter team of Jeanne Kuhns and Marybeth Mattson (each talented musicians in their own right) whose magical harmonies, along with Pat Palmer’s grooving baselines, make up the progressive indie folk the band has been known for since coming together two years ago.

Dream is a culmination of strong individual songwriting talents between Kuhns and Mattson (who co-wrote just one song on the album – the thumping, multistring “Lines”), a think-outside-the-box approach to instrumentation (cello, seed pods, mandolin, fiddle and lap steel are just a few features of the album), and despite traces of blues, rock and soul, a wonderful cohesiveness throughout the album.

Mattson and Kuhns’ layered harmonies are the highlight of the band and hence, the album. They switch off as lead singers throughout, delivering poetic lyrics in smooth, clear voices on themes ranging from community to nature to relationships. The range in their voices is key to the multitude of sounds they achieve in this album.

With Palmer a steady presence in the background, the band enhances their own sound on the 12-track album with a number of talented guest musicians, including Tommy Burroughs (Memphis, Tennessee) on fiddle and mandolin; Chicago musicians Tony Dale on percussion/drums and David Walker on electric guitar; and Door County musicians Hans Christian on lap steel, cello and udu, and George Sawyn and Seth Raddatz on acoustic/electric guitar. Christian also co-produced, recorded, mixed and mastered the album at Studio 330 in Sturgeon Bay.

Small Forest’s members deserve major credit not only for capitalizing on their familiarity and relationships with these talented musicians from Wisconsin and beyond, but for their willingness to step aside and let these musicians’ talents shine brightly throughout the album.

During an interview with Small Forest earlier this year, Mattson called Dream “by far the best music I’ve ever made. The production quality is outstanding.” This was also the same interview they mentioned trading sweat equity scraping and painting Hans Christian’s Studio 330 (and serving, bussing tables and washing dishes at the studio’s Christmas party) for studio time. That dedication to bringing their music to life in album form is evident in every note on Dream, particularly their stomping final song, “Give It Time,” which just may be a hint to the Small Forest fans who will undoubtedly demand album No. 2 after the final notes of the song fade.

The dream of the band was realized in part due to contributions through its Indiegogo crowdfunding campaign this spring, which helped bring in more than $9,000 toward the album’s cost. They continue to fundraise.

A CD release concert for Dream will be held at 7 pm on Friday, July 24 at Woodwalk Gallery in Egg Harbor. The band will be joined on stage by all the guest musicians who played on the album. For more about Small Forest, visit SmallForestMusic.com.