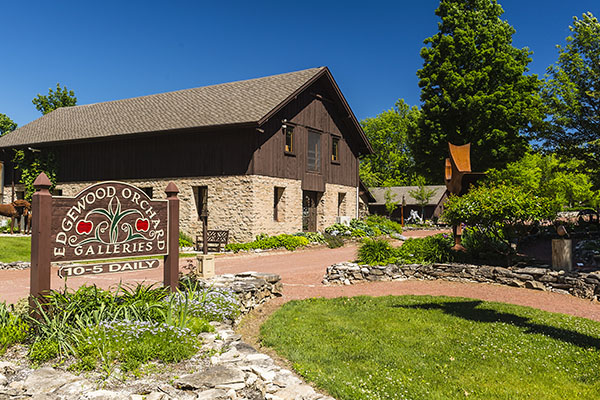 The tale of one of Door County’s most prestigious and beloved galleries starts like a movie celebrating sisterhood. Imagine two married Milwaukee girlfriends — Irene and Ethel — driving up the Door Peninsula in the late 1950s for a little R&R. Irene notices some beautiful trees, an old fruit barn etched with “1918,” a For Sale sign, and puts down an offer for 80 acres of dying cherry trees without speaking to her husband.

“Her friend didn’t even want to get back in the car with her,” said Nell Jarosh, granddaughter of Irene, who now owns and operates Edgewood Orchard Galleries with her husband J.R.

“I’m not going home! You just did this without talking to your husband?” Ethel berated Irene.

So the women went out for steak. Though the property would sit unattended for another 10 years, the impulse purchase would eventually change the shape of the Door County art scene.

Irene, an art teacher who took flying lessons, charted horoscopes, and raised 300 canaries, didn’t begin the process of turning Edgewood Orchard into what it is today until her physician husband died in 1967.

“She said she had lost her gyroscope,” Anne Emerson, Irene’s daughter and former owner, wrote of her mother. Irene considered joining the Peace Corps before asking Anne, then in her early 20s and a writer for the Chicago Press, to help her open a gallery in the old fruit barn she bought on a whim. Anne took a leave of absence and fell in love with Door County. 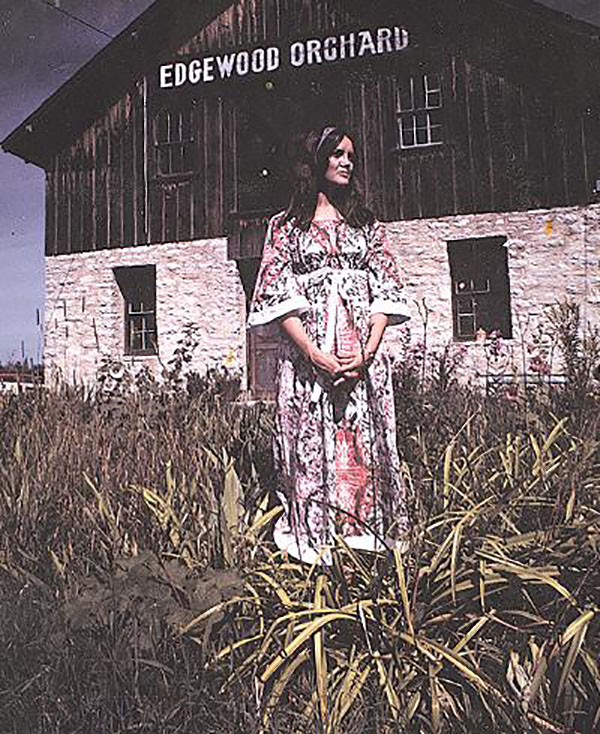 Anne Emerson in the gallery garden shortly after her mother recruited her from Chicago to open a gallery with her. Submitted.

Irene set up a section of antiques to sell, while Anne, buzzing around the Midwest in her VW Bug, attended art fairs and met up-and-coming artists, primarily glass artists, to show in the new gallery — Jack Schmidt, Audrey Handler, Richard Jolley. The Door County art scene was attracting a slew of young artists who opened studios, galleries, and art schools including Madeline Tourtelot, Abe and Ginka Cohn, Charlie Lyons, Tom and Amanda DeWitt, and David and Jeanne Aurelius.

That first summer, Edgewood Orchard was open from 2 – 5 pm so Anne could waitress lunch and dinner shifts at Maxwelton Braes and the C&C Club. It took them several years to break even, but Anne knew she wasn’t going back to Chicago.

That winter Anne met her future husband Minnow in Milwaukee. He was an architecture student who planned on traveling to Alaska, but abandoned those plans and moved to Door County the following summer instead.

Fast forward 50 years, the gallery is now galleries, showcasing 150 artists from across the country including paintings, sculpture, glass, clay, wood and jewelry; leaden glass windows and carved doors designed by Minnow; an award-winning sculpture garden designed by J.R.; and a welcoming courtyard where you might be offered a cold beer on a hot day.

“We’re genuinely happy to be here and when we are genuinely excited about a painting or a piece of glass, they can see that; they appreciate it,” said J.R. “We want people to feel welcome and not feel like if they don’t buy something they’re gonna get tackled.”

After high school, Nell moved to Philadelphia and worked at a salon before returning to the county in 1997. “I had to leave and come back to really appreciate the gallery, what my family had started and Door County as a whole,” she said. 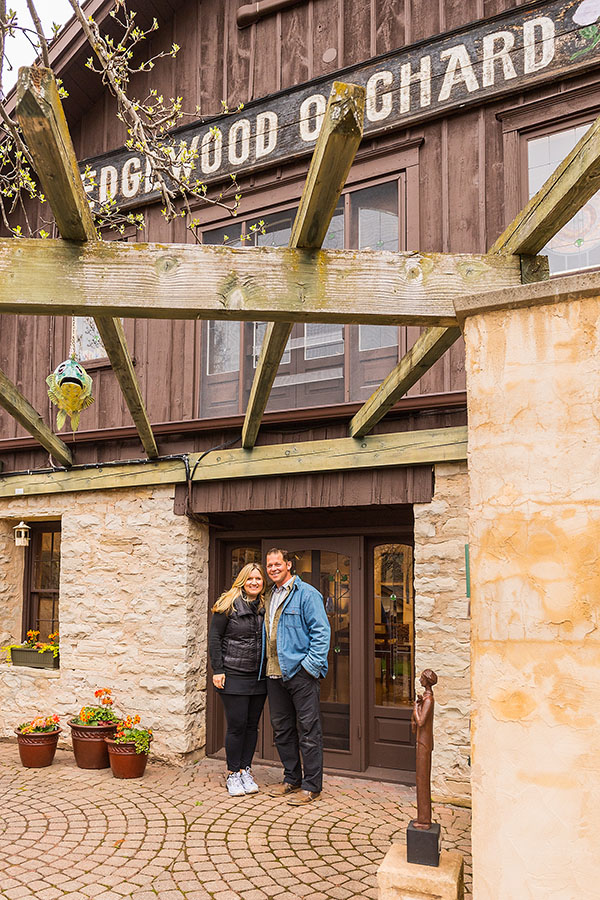 Nell and JR Jarosh took the gallery’s reins from her parents in 2005. Photo by Len Villano.

Nell and J.R. met soon after at a Thursday night volleyball league in Sturgeon Bay. They started dating, Nell managed the gallery and J.R. worked as a physical therapist in Sister Bay; they married. “My plan was to help out when we started to buy the gallery in 2005, then we found out we were having twins,” J.R. said, laughing.

The logistics of raising twins influenced J.R.’s decision to work at the gallery full time.

“It’s a good life, it’s a fun life,” Nell said. “We get to be together, we’re surrounded by beauty and we love it.”

They are also surrounded by a staff they call friends and uphold “a family atmosphere,” J.R. said.

The artists they represent share a similar sentiment. Jeanne Aurelius and her husband David have shown their pottery at the gallery for more than 25 years.

“It feels like family,” Jeanne said. “We are honored to display our work there.” The couple became fast friends with Anne and Minnow. “We even stopped at the gallery to show off our newborn baby girl on the way home from the hospital,” she added.

Newcomers to the gallery also feel honored and grateful for the opportunity to show their work at Edgewood. “Last year I decided it was time to reach out to the gallery I’ve admired for many years and I was accepted after Christmas,” said painter Pam Ruschman. “It was the best gift of all. Edgewood Orchard has a beautiful energy.”

That beauty is put together under the leadership of Nell, though her and J.R. work together to come up with themes for exhibits, travel across the country to check out new artists, and filter through the more than 100 applications they receive from artists who want to display at Edgewood every year.

“We don’t have art backgrounds,” J.R. said. “We aren’t confined by what we think we should like. We try to show what we think is fantastic, what takes our breath away.”

The number of artists they show may seem daunting, but the couple embrace the ever-changing atmosphere the various mediums and styles bring.

“It is a lot of work to keep organized and have the space for storage, but I think the upside is, you can really put something nice together — a painting over a piece of furniture with a piece of glass on top of it,” J.R. explained. “If you only have a couple artists you wouldn’t have that harmony.”

They add to the puzzle by embarking on a yearly goal or project — more stone walls, more trails through the sculpture garden. To celebrate the 50th anniversary of the gallery they decided to add a deck connecting the two galleries. 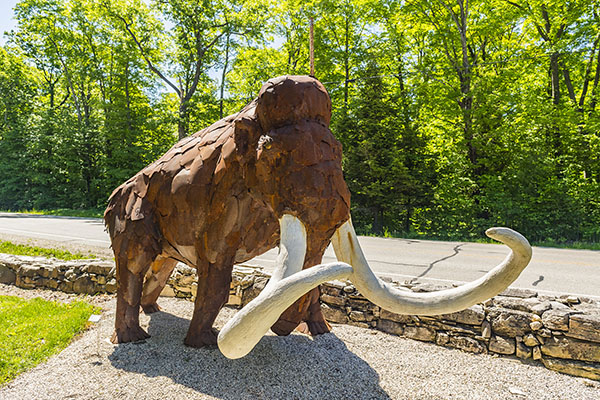 In its 50th year the gallery will continue its tradition of offering artist talks, demonstrations, and book signings in the courtyard; hosting plein air painters, writers, and yoga sessions in the sculpture garden; and celebrating the end of each season with a party for their artists in the barn, as well as raising their children to have an appreciation for art, whether or not they decide to one day take over the gallery.

“When the girls are here, we try to keep them busy,” J.R. said. “When they’re here it’s special, it’s fun. They love to check out the new stuff going up. It’s fun to hear them say, ‘Oh, is that a John Sayers?’”

This family affair, this comfortable space that happens to sell fine art, keeps Edgewood Orchard a mainstay for many of Door County’s residents and visitors.

“One of our biggest compliments that people will say is, ‘You’re our first stop. We haven’t unloaded the car yet,’” Nell said.

And they are pleased to offer art at various price points, to drive across the county to deliver a sculpture, or to simply chat and share a laugh.

Edgewood Orchard Galleries is located at 4140 Peninsula Players Road between Fish Creek and Egg Harbor. The gallery is open 10 am – 5 pm through October 28. For more information call 920.868.3579 or visit edgewoodorchard.com.

The twins that inspired J.R. to work at the gallery full time, also indirectly inspired the sculpture garden that was opened in celebration of Edgewood’s 40th anniversary.

“That winter the kids were born, we were pleasantly sleep deprived,” J.R. remembered. “About 2 am in April I had an idea, so I sketched it out on a piece of poster board, and of course forgot about it, then the next morning there was this plan for the sculpture garden.”

They are happy to offer a place for visitors to stroll the grounds, enjoy the wide variety of art, and try their hand at sculpture with a box of stacking stones kept at the garden’s entrance. The garden also offers a place of reflection, a place to remember where Irene’s love of the property began, with the trees.

“People would ask Irene why she loved the property — she loved the trees, she wanted to walk on it,” J.R. said. “I thought of that when I was weaving the path through the pines and I think she would be happy that other people love to walk on it now, too.”

A path through the woods and sculpture garden. Photo by Len Villano.

Nell Jarosh is the third generation of her family to run the gallery. Photo by Len Villano.