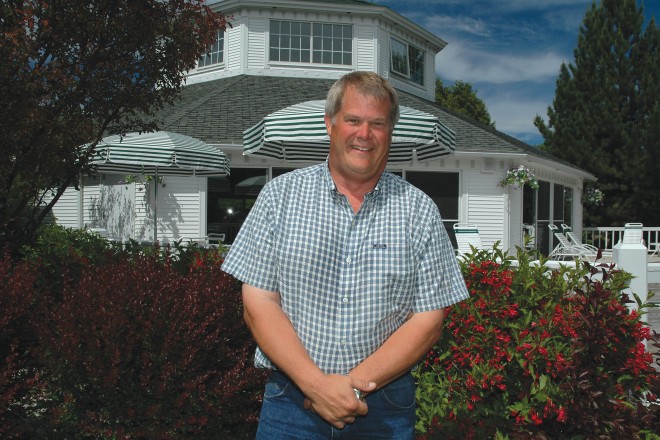 Prior to our interview, I asked a handful of people, “What do you know about Fred Anderson?” Expecting the usual pleasantries and biographical snippets, instead I got a unanimous reply: Fred Anderson might very well be the nicest guy on the planet.

That seemed like an extreme statement. How could one even begin to quantify that? But with the interview over and after a little more digging, I have to say I agree with both the characterization and the emphasis. Fred is “niceness” incarnate. And, more, he’s the mold from which upstanding citizens are made. A family man foremost, he’s also an unusually civic-minded individual and a die-hard Door County enthusiast.

That enthusiasm, no doubt, has much to do with his roots here. In 1929, Fred’s grandparents opened the Baileys Harbor Laundry, a commercial operation in the building now occupied by Frogtown Framing & Gallery next to the town marina. It became the truest definition of a family business, as it was later owned by Fred’s parents, Bob and Betty, and much later by Fred and his high school sweetheart-turned-wife Debi.

Fred’s early interest in flying played a part in leading him eventually, and somewhat by chance, to a small aircraft engineering college in Oklahoma, and later to a job in Oshkosh at the Square D Company’s engineering department. Door County called him home, however, and in 1981 he and Debi took over the family business – a trade which meant, he remarks with total candor, doing “a couple million pounds of laundry a year” and servicing a majority of hotels and motels in northern Door. Fred and Debi continued the business through its heyday, moving it to Sister Bay in 1987, but by 1998 the couple decided that 69 years was enough and sold the business with the intent of beginning a new chapter in their lives.

So, in 2001 Fred purchased The Ashbrooke, an idyllic hotel on the north end of Egg Harbor with a “nice” factor equal to that of himself, from long-time friends Jerry and Pat Ploor. “The innkeeping business had always intrigued me,” says Fred. “I had watched The Ashbrooke evolve out of the elegant, adults-only, romantic get-away niche that Jerry and Pat had gone after into a wonderful place. Plus, being a customer-service oriented person I knew I would find innkeeping satisfying.” Nowadays, Fred is at the hotel nearly every day “keeping busy with normal managerial duties and filling in where needed.” I learn that this means a range of activities, from cleaning and general maintenance to accounting, marketing, and – you guessed it – throwing in the occasional load of laundry, an irony of which I suspect he’s acutely aware.

Although Fred is unquestionably a dedicated business owner, he’s also among the distinguished few who can keep pace with both work life and community involvement, all the while perpetuating his nice-guy reputation. In short order, he rattles off a list of his activities over the years:  he was the Baileys Harbor Fire Chief for five years, from 1987-1992; he served on the Board of Directors for the Door County Chamber of Commerce for eight years, with a one-year stint as its president in 1992; he is in the midst of his 14th year on the Gibraltar School Board; and he is a member of the Door County Strategic Marketing Coalition Steering Committee, an organization dedicated to sustaining and growing the area’s tourism industry. Oh, and he just finished his sixth year as the Gibraltar High School golf coach, a 20-hour per week job in season.

I suspect that it’s this latter activity that is the most rewarding, albeit most time consuming. His coaching career began by default when he agreed to the position for just one year because the previous coach had retired and the program faced a budget cut. “There were a couple of kids who had a lot of potential with golf and I didn’t want to see them lose the opportunity to play at the high school level,” says Fred, adding that one of the greatest highlights has become “watching them come in as 13 year-old boys and leave as 17 year-old young men.” His interest in positively impacting youngsters, I gather, stems from being a parent himself to Kirstin, 18, and Kyle, who would have been 23 this fall. It’s a realm in which he makes, perhaps, his deepest mark. Making his point crystal clear on several occasions during our conversation, he asserts, “Family first. Family is the number one priority.”

Between parenting, running The Ashbrooke, his various community involvements, and other hobbies, Fred has still somehow made time to impress his exceptional character on both customers and peers. Is he in fact the nicest guy on the planet? Well, I suppose there are probably other contenders out there. Suffice it to say, then, that if a show of hands is one way to quantify the distinction, he’s at least the nicest guy in these parts.