The Wisconsin Grape Growers Association has a list of 78 Wisconsin wineries, and 20 of those are recognized as Wisconsin Accredited Wineries that produce wines with 75 percent or more Wisconsin grapes.

Among those 20 is Orchard Country Winery in Fish Creek. The Lautenbach family winery grew out of Bob Lautenbach’s orchard business, started in 1955. The business thrived as an orchard for 30 years, but in 1985 Bob decided to start making fruit wines.

“We got our start with cherry wine, because my dad is a cherry grower by nature,” said Carrie Lautenbach-Viste, director of marketing and production for the business. “It’s been a great business for us. A lot of tourism. A lot of people love that buy local [program], producing local products. Our goal is to create a product as close to the real fruit flavor as it can be.”

“People seem to love the idea that it is grown and processed 100 percent right here,” Bob Lautenbach said.

While the sweeter cherry, apple, pear and other fruit and berry wines are popular, the Lautenbachs realized there are some who don’t believe you have made wine unless it is made with grapes.

The Lautenbachs planted their first vineyard in 1999 with Frontenac and Marechal Foch grape varieties for red wines, and expanded with La Crescent and St. Pepin white varieties.

“Audrey Grace was the first estate-grown wine with grapes from our own vineyard, named after the first grandchild,” Lautenbach-Viste said. Audrey Grace is her daughter, now 11.

They were not completely happy with the first release of Audrey Grace.

“We were learning as we went,” Lautenbach-Viste said. “When we first released it, it was young, without a lot of complexity and so different from what customers are used to.”

The next release was named after the second grandchild, Nathan John.

“It’s a Foch-Frontenac blend again, but also some Bing cherries from the orchard to kind of give it a little more complexity, bring something more fruit forward to it,” she said. “It added body and mouth feel and just different flavors came out. We did really well with that. And it was a little sweeter. We have a really big sweet wine following. It’s just the nature of what we’re doing with our wines.”

That was followed by Lauren Elizabeth, a La Crescent white grape from the vineyard with honeycrisp apples from the orchard.

“It’s still on the drier side, but it’s really fruity. You really taste that apple in there, as well as the grape,” Lautenbach-Viste said.

In 2006, a new grape variety was introduced, the Marquette, which the University of Minnesota declared “represents a new standard in cold hardy viticulture and enology.”

“We heard about this Marquette grape and how great it is,” Lautenbach-Viste said. “We kept hearing the Marquette grape produces a more complex wine. You could do more with it.”

“The first batch we released, we sold out in the first month, all 40 cases, so it was clearly a hit,” Lautenbach-Viste said. “We bought another two barrels after that.”

The two new barrels included toasted heads – the inside wood on the heads are charred to add another dimension to the aging wine.

“We’ve gotten a lot of positive feedback, and it’s increased the value of our tasting list,” Lautenbach-Viste said. “We’re going to expand the wine bar a little bit because wine tasting has really become quite the recreational activity.”

Lautenbach’s Orchard Country broke ground recently on a 4,952 square-foot expansion project that includes additional retail and storage areas, as well as an indoor space for annual events and live music. 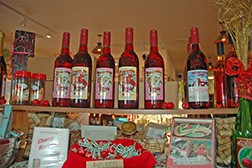 “We’ll use it as space for more live music, more events, cheese plates, wine by the glass, more of a cozy setting,” Lautenbach-Viste said. “We’ve wanted to do these things, but all we really have is the store. It gets quite busy at certain times of the year. We probably get 50 requests a year to do weddings because everybody loves the vineyard setting.”

Lautenbach’s Orchard Country Winery & Market at 9197 Hwy. 42 in Fish Creek. The market is currently open Thursday – Monday with complimentary tasting from 10 am – 4 pm. For additional information call 866.946.3263. You can order wine online at orchardcountry.com.