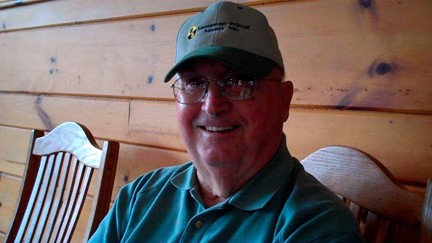 Jocko Rader has been around Door County League baseball for six decades.

He was just one fan, but when Door County League baseball resumes next Mother’s Day, there will be a gaping hole in the heart of the league.

Jennings “Jocko” Rader was for many years the soul of the league, telling its stories in print for the Door County Advocate, tracking its statistics and keeping the league alive.

“He did his best to keep that league functional and going strong,” said longtime Advocate sports editor Korey Mallien. “He would find ways to recruit guys. Even this last summer, he was at the games.”

He started as a player in the league in 1949, starring as a diminutive shortstop (he stood five feet, four inches) for Little Sturgeon and Maplewood. After hanging up his cleats, he spent four years as an umpire, then turned his attention to pulling others into the fold. He recruited umpires, managers and players to needy teams.

Rader’s recruiting efforts can be credited for creating a local tradition. In 1968, he stopped by the WDOR radio studio in Sturgeon Bay to persuade the station to broadcast Door County League baseball games.

“My dad asked him who would do it,” recalled longtime WDOR voice Eddy Allen. “Jocko told him to have me do it. I had just gotten out of the Army. I’ve been doing them ever since.”

Rader had a vocation that was well suited to his avocation. As an insurance salesperson for Stoneman-Schopf, Rader traveled up and down the county visiting and drumming up clients. Along the way, he talked baseball, bowling, high school sports and a lot of golf – the only thing he had a bigger passion for than baseball.

Rader stopped at each course, collecting league results and player accomplishments for his column in the Advocate, where dropping a couple dozen names in a single column was all in a day’s work. His first bowling column appeared in the paper in 1964, and for the next four decades, his face was a familiar one to anyone who followed local sports.

“He was a name-dropper,” Mallien said. “He would put anybody and everybody into what he could pack into about 30 column inches a week. It wasn’t always the most fascinating read, but everybody would look for their name. If you made Jocko’s column, it was a special day.”

Rick Gigot grew up searching for his name in Rader’s columns, then worked alongside him helping to run the county league.

“When somebody did good, he liked to publicize it and give him a pat on the back,” Gigot said. “He loved giving guys a nickname, even if he didn’t know you.”

When the league’s board discussed why a rule was in place, Jocko was the man they turned to. He’d pull up minutes from a meeting 22 years prior, or a copy of the bylaws, where “Jocko amendments” were scribbled in the margins.

As times changed, Jocko didn’t. Over the years, many an Advocate editor tried to bring him into the digital age, or at least the age of the typewriter. None succeeded.

“He would drive our typesetters nuts because back then, you didn’t have computers,” Mallien said. “You would have to submit it. They would take any incoming copy and type it up. Well, Jocko would come in with four to five pages of handwritten notes, and they’d sometimes have a hard time making sense of what words he was using.”

Last summer Rader was still making the rounds, but limited them to one ballpark per Sunday (he was once known to visit three or four games on a Sunday afternoon). Early in the season, he called the Peninsula Pulse to submit his hand-scribbled league schedule, and in the fall, his mind turned to high school basketball.

For Mallien, Rader wasn’t just a columnist – he was family. Rader was an uncle to Mallien’s wife, and anytime they visited Rader’s home, they’d find him in his seat with a game on. He lived and breathed sports.

“The last time I saw him, that last day, he asked me about Southern Door basketball and the Claflin kid,” Mallien said through tears, referring to University of Wisconsin-Green Bay commit Ryan Claflin. “He told me to keep him updated on the scores.”

That was Rader: a fan to the very last breath.