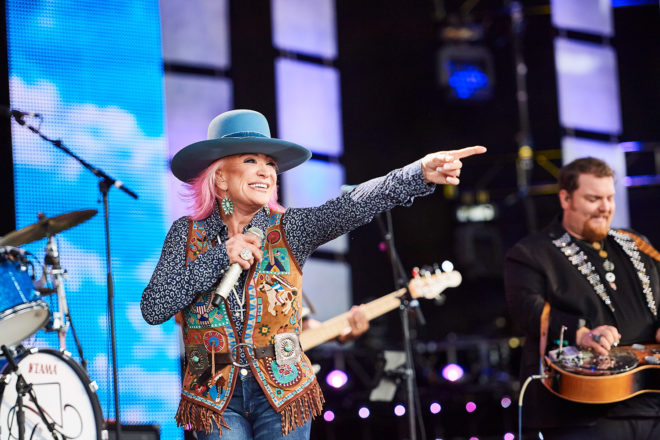 When Farm Aid President Willie Nelson took the stage at Alpine Valley on Saturday for an 11 am press conference with fellow Farm Aid board members Neil Young, John Mellencamp and Dave Matthews, it seemed we were witnessing the end of an era.

In early August, Willie canceled his national tour for a month due to breathing problems. When the 86-year-old music legend took the stage for the press conference, he looked pained and seemed to be gasping for breath until it was his turn to speak, and then his mellifluous voice flowed. Twelve hours later, Willie would take the stage with his family band to close the daylong Farm Aid show before a crowd of 36,000 people (according to Neil Young).

Willie began his Farm Aid-ending set with “Whiskey River,” a song he first recorded on the 1973 album Shotgun Willie. Even though it was written by another (Johnny Bush), “Whiskey River” has long been regarded as Willie’s signature song and a common set-list opener.

Some read signs in his set list, such as the inclusion of “Roll Me Up and Smoke Me When I Die” and his closing with a medley of gospel tunes, “I Saw the Light,” “Will the Circle Be Unbroken” and “I’ll Fly Away,” while being joined by many of the performers who preceded him during the day, including Margo Price holding her not quite four-month-old daughter Ramona. But that is how Willie has been closing his shows for some time.

Willie’s son, Lukas Nelson, seemed to be all over the place. After performing a great set with his band Promise of the Real, ending with a great cover of Stephen Stills’ “Carry On” and “Questions” (written, respectively, for Crosby, Stills, Nash & Young and Buffalo Springfield), he and his band also backed up Neil Young. “It’s like Christmas,” Nelson said about the Farm Aid tradition. “It’s a family reunion.”

Other highlights of the day:

• Yola blew some minds with songs from her debut album Walk Through Fire and had people singing along to her great rendition of Elton John’s “Goodbye Yellow Brick Road.”

• I enjoyed the 60-year-old sassiness of Tanya Tucker’s set, her first Farm Aid appearance since the first year in Champaign, Illinois, in 1985. She’s been touring after the recent release of her first album in 18 years, While I’m Livin’. She said it was great to be back in the Farm Aid loop and said to farmers, “When I get hungry, I’m going to think of you.”

• Bonnie Raitt brought the house down with her set-ending incendiary version of the Talking Heads’ “Burning Down the House.” Her guitar work and singing throughout the seven-song set was incredible, especially her acoustic cover of Skip James’ “Devil Got My Woman,” dedicated to Stevie Ray Vaughan (who died in a foggy helicopter crash while leaving Alpine Valley after a concert on the same stage in August 1990), and her cover of John Prine’s “Angel from Montgomery.”

• Guitarist Tim Reynolds stole the show in the acoustic set he did with Dave Matthews. Reynolds proved himself an absolute master of the guitar.

• John Mellencamp got the giant crowd singing along to his hits. The whole time I thought I was seeing his original violinist Lisa Germano, whose 1993 album Happiness still brings me pleasure, but only later found out that the violinist’s name is Miriam Sturm and she has been with the band for 20 years.

• Neil Young opened his incredible set banging an old piano on “Are You Ready for the Country” from his 1972 Harvest album. Except for two acoustic songs (“Harvest Moon” and “Heart of Gold”), Young was backed up by Lukas Nelson and his hard-rocking Promise of the Real. Great to finally see Neil Young live after listening to his music for half a century.