I took a swing down to the Egg Harbor Marina yesterday to check out the scene in advance of Saturday’s dedication. I grew up in Egg Harbor, riding my bike off the pier, crashing hard into the pavement in feeble attempts to leap my BMX off the ledge by the boat launch, and generally doing a lot of stuff the dockmaster didn’t like. 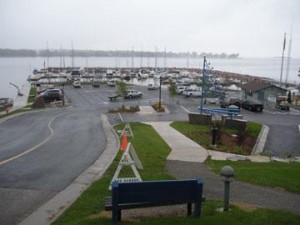 The Egg Harbor Marina will be dedicated Saturday.

When you have a personal attachment to a place, it’s hard to accept a change, but that’s not the case with the new marina. I don’t have a boat, and haven’t spent a lot of time on one in my days in Door County, so I look at it not from a boater perspective, but from that of a pedestrian’s stroll, a fisher off the pier, and a family picnic up in the park. From where I look, the view is incredible.

The slices of grass and green that line the edge of the parking lot are fantastic touches that break up what had been a giant swath of cement shoreline. The wooden finger piers create a boardwalk like feel that is much more eye-catching than concrete. From that boardwalk, as one looks back toward shore, I noticed the subtle effect of the contoured mounds of grass and greenery. Those slight rises serve to break the pavement of the parking lot into slivers, rather than a landscape dominating impervious surface. 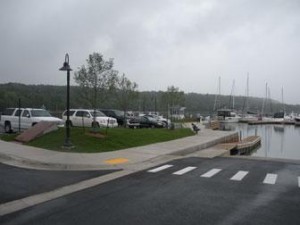 The use of contoured green space helps break up the dominance of the parking lot.

As I strolled, I couldn’t help but note the value in delaying this project, for beyond the breakwall I could see the point across the harbor, and the horizon line in the distance. The controversy and delays that dogged this project made this possible, because it was in those negotiations that it was decided to lower the breakwall by 2.5 feet. Had that not happened, boaters and strollers would be looking out at an insurmountable wall of red rock.

I can’t speak for Door County boaters, but most of us aren’t captains anyway. About 70 boats might dock at this marina on a busy summer day, but thousands more people will use it as I do – for a stroll, to fish, as a place to watch the sunset. From that perspective, Egg Harbor has greatly exceeded expectations. Thanks to a design that integrated aesthetics throughout, the marina will be much more enjoyable in those 6 – 9 months when the boats aren’t there.