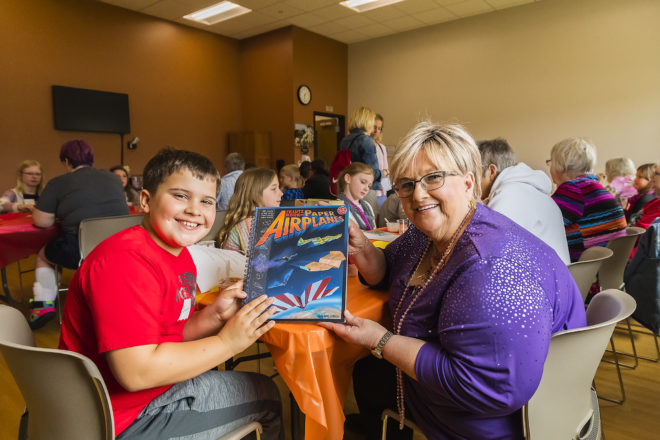 When Judy Larson learned that her pen pal, Grant, wants to be a pilot, she got him a book to make paper airplanes. “I thought this would get him started and get him off the computer, right?” Judy said. “Right,” Grant answered, although not too enthusiastically. Photo by Len Villano.

A room inside the Door County Community Center was buzzing on May 21 when a group of pen pals who have been corresponding since December met in person for the time.

The idea for students in the Sturgeon Bay School District to write to seniors who take part in programs at the community center – which the Aging & Disability Resource Center (ADRC) runs – was the idea of Jane Stephen, the school district’s community-engagement coordinator.

“A school board member involved at ADRC was trying to come up with a way to connect seniors and students,” she said, adding that Heidi Richard volunteered her class to be the first pen pals.

“I know for a fact this has been a wonderful program,” Stephen said. “It will absolutely continue. I know Heidi will pursue this with her class next year, but we would like to open it up to some other age groups and some other school districts as well.”

“It means so much to the students,” Richard said. “I cannot tell you what it is like when I announce to the class, ‘We got letters from our pen pals.’ The whole class erupts. You would not believe it. It’s like Christmas morning in my classroom. Then I announce everyone’s name and pass out the letters, and they read them. It’s like they got a gift, and it actually is a gift. The letters have been amazing.”