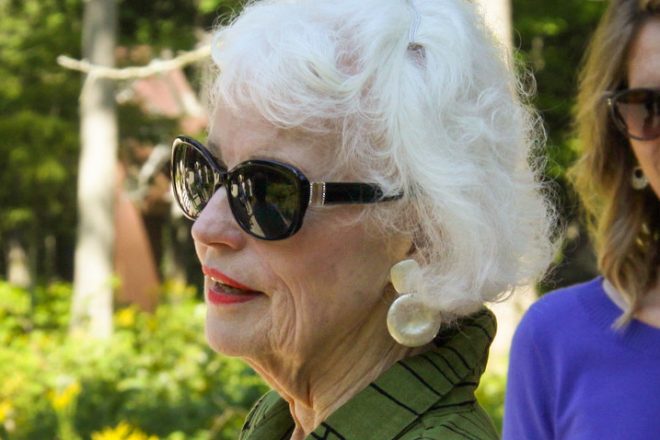 Virginia Maher is Door County’s very own art historian – one who combines a discerning eye with a talent for clear, jargon-free writing about local artists and their work. She and her husband, Tom, a retired architect, moved to the county full time in 2002.

Maher studied as an undergrad at Loyola University in Chicago and then returned to study at UW-Milwaukee in 1994 and earn an M.A. in art history. She has helped people understand and appreciate art through her writing and teaching, including summer classes at Peninsula School of Art.

“If we are to appreciate art, we must try to understand what the artist wanted to do,” she explained in an email interview. “The greater our understanding, the more we enjoy art. We are never finished learning about art. There are always new things to discover. Great works of art seem to look different each time you stand before them.”

The Mahers have also contributed art: more than 60 Wisconsin paintings, prints, drawings and artists’ books to the Miller Art Museum; three large sculptures to Peninsula School of Art; and 40-plus modern and contemporary artworks to UW-Milwaukee’s art museum.

In 2016, Maher published Selected Artists of Door County, with a page about each of more than 60 artists. She interviewed them at their studios with her collaborator Paul Burton, a photographer and writer.

This year, Maher published Beauty in Simplicity, a meditation on beauty and simplicity – as the title says – cast around pottery, with insights from thinkers and visionaries such as Jens Jensen, Frank Lloyd Wright, William Morris, John Ruskin and even text from pottery catalogs of the early 20th century.

When I visited Virginia and Tom Maher to talk about Beauty in Simplicity, she brought out a book she had written in 2018 titled Picturing the Past: The Ephraim Historical Foundation’s Art Collection, produced with assistance from Emily Irwin and Paul Burton.

The book is a combination of art and history. It opens with a painting by Rev. Andreas Iverson, that founder of Ephraim, that depicts him painting at an easel in a frock coat, circa 1860. The Moravian Church, which he led, is in its original site by the water’s edge, with sailboats on the bay. The church appears again in a 2010 painting by Charles Peterson showing teams of horses moving it uphill in 1863 to its current location.

Another striking watercolor by Claxton, “Light Wind” (1953), shows three sailboats, each with a crew of two tacking parallel to each other.

“There is no discernible scenery or recognizable landmarks to distract the sailors, nor the viewer,” Maher said. “In this partially abstracted painting, the water is reduced to diagonal shapes and lines, and the sky to a gridded pattern of blue and white blocks of color, as if to create a zone of concentration.”

Maher divides the collection’s paintings into seascapes, landscapes, portraits, rural scenes and landmarks. Using the approach that worked so well with Selected Artists, she has a page of text facing a page with one image.

The foundation’s collection is unusual, notes Emily Irwin, who was the outreach director and curator when the book was developed.

“Historical institutions traditionally collect items like garments, household goods and furnishings from the past,” she said, but the Ephraim Historical Foundation, founded in 1949, “began collecting art by local artists soon after its inception.”

She pointed out a painting of Ephraim from 1900, for example, that “depicts the local landscape in a unique way, with the artist’s singular perspective. Such an image shows changes to the natural and built environments and can even capture moments from daily life such as historic modes of transportation or clothing. When examined through artistic and historical lenses, countless stories emerge from a single piece of art.”

Maher’s comments on a 1920 painting of sailboats in Ephraim Harbor by Jessie Kalmbach Chase are typical of the way Maher is able to combine a knowledge of nature and an eye for painting into a couple of illuminating sentences: “The Niagara Escarpment bluffs form a strong horizontal line in the center of the painting that focuses the viewer’s attention to the tall vertical masts and billowing sails on four boats racing on a course in the bay.”

Commenting on an untitled landscape by Martha Mary Hachmeister (c. 1935) – a painting of three birch trees and a cottage tucked into a row of evergreens – Maher writes that “with its primitive, flat forms and muted, symbolic colors, appears greatly influenced by Der Blaue Reiter, turned away from mainstream, naturalistic art to a simpler, freer primitive style as a move toward abstraction and spirituality in order to transcend negative aspects of modern life and political turmoil.”

Maher believes that a key value of art is its ability to reach beyond materialism and the clutter of everyday life. In Selected Artists, she finds three themes in Door County artists. One is the rise of women artists, which “parallels gains women artists have achieved nationally and internationally.”

The second theme is that art affects both the viewer and the creator, and a third theme is a growing interest in abstract art.

“Today, many of the peninsula’s artists are beginning to accept the notion that less can be more,” Maher said. “Consequently, more and more abstracted two-dimensional and three-dimensional objects are being created.”

As she recounts in her books, the Door County arts scene does churn with outsiders moving in and bringing their own influences, and with Door County residents who are studying around the country and worldwide. She said this has been going on since at least the 1920s, when two professors from the Art Institute of Chicago opened a summer art school for disabled veterans.

“One constant over the years is that Door County art is so influenced by the environment: the forests, miles of shoreline, vastness of Lake Michigan, rolling farm fields, Niagara Escarpment and quaint villages.”

A focus on the natural world does not preclude abstractions or imaginative interpretations, however, and that has been true for more than a century. Maher shows this style of painting, which was often impressionist, and has a long tradition in Door County.

Maher will sign and sell Beauty in Simplicity at the Baileys Harbor Winter Farm Market Dec. 4 and 11, 10 am – 2 pm.