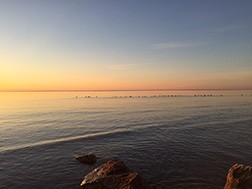 The prevalence of smartphone technology has rapidly revolutionized the functionality of American culture. Telecommunication almost seems secondary to the international connectivity we have through social media and the fun we experience in gaming and entertainment apps. The industry has done a great job in creating a “need” within the American consciousness unlike anything we have experienced in quite a while.

Smartphone sophistication has grown in leaps and bounds since its inception in the past five to 10 years. One component of the evolution, the smartphone camera, has allowed users to express the intimacy and the nuances of daily life with a few taps on their touchscreens. These pictures fill Facebook pages and provide a glimpse into an individual’s unique little world.

The natural world around us (especially here in Door County) is its own platform, providing a plethora of photographic opportunities. The Ridges Sanctuary in Baileys Harbor is inviting the public to channel their inner photographer with a Photo Ops Hike on May 14 (cost is $5 for adult members and $8 for adult non-members). This is an opportunity to use the hardware on your smartphone and inundate it with the blooming wildlife that has entrenched the transition from the winter to the summer season.

“Early spring is subtle,” says Jane Whitney, a volunteer at The Ridges who will help lead the hike on the 14th. 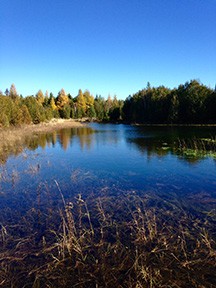 While Door County is transitioning to a season flush with beautiful wildlife, people don’t always know where to look for these staples of spring’s resurrection. The tour is meant to “help people who want to take these photos but don’t know where to look.”

While I enjoy nature and killing time on my iPhone as much as the next guy, my #nofilter pics aren’t up to par with the many I see scattered across social media platforms. Some technical advice is needed to really encapsulate the potential of a smartphone photo.

“Don’t take pictures, make pictures,” says Mark Hirsch, a professional photojournalist located in Platteville. “Compose the photograph you are trying to make in your camera. Get close and fill the frame because the resolution and light-capturing potential of a smartphone camera does not allow the flexibility of cropping a better picture later on your computer without sacrificing resolution.”

Hirsch gained national attention for his project, “That Tree,” an iPhone photojournal where he documented the life of a Bur Oak over the course of an entire year. Every day of the project represents a different perspective of the tree in a variety of compositions. Hirsch’s career and years of experience in nature photography have provided him a unique perspective on the important elements to consider when shooting nature with a smartphone. 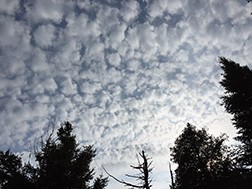 Hirsch emphasizes the importance of patience in composing a photo. He encourages smartphone users to select the area they wish to focus on by placing their finger on the focal point of the photographic composition, since most smartphones will lock the focus and exposure on that point when an individual holds their finger there until the camera cursor blinks.

“Be aware that after taking a photo, most smartphones revert back to a point and shoot mode so you will want to recompose and lock the camera for your next composition,” he says.

He adds that the photographer should use interesting elements like flowers, branches, fences, or trees “to connect foreground and background objects into active compositions. Intentionally focus on objects closer to the camera so you diminish the depth of field to help isolate objects like flowers against a soft out of focus background.”

For examples of Hirsch’s work, visit ThatTree.net. To put your newfound photo skills to use, be sure to stop by The Ridges Photo Ops Hike next Thursday. Happy snapping!