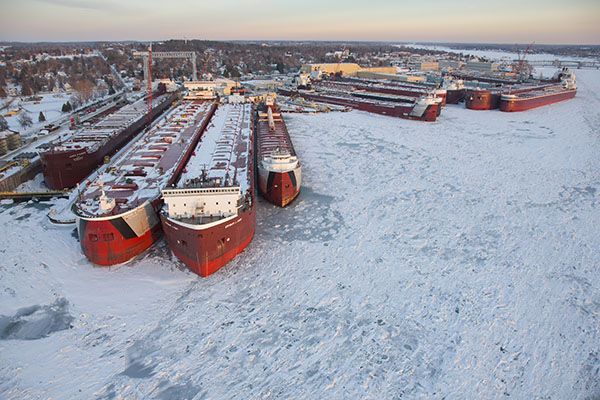 Ships of the Great Lakes fleet winter for repair at Fincantieri Bay Shipbuilding. This aerial photo was taken in 2015 by Chris Winters.

In October 1975, at the age of 18 and fresh out of high school, Dave Dart started a job at Bay Shipbuilding and had the privilege of working on the first 1,000-foot vessel that the company built in Sturgeon Bay.

“My first job was putting together the inner bottoms for the Belle River. You start right from the bottom, like the foundation for a house,” Dart said. “It was a sense of accomplishment to see it go. I worked on that for two years before it was done. As technology advanced, we were down to seven, eight months to build a 1,000-footer.”

Forty-three years later, the Belle River is still plying the Great Lakes for the American Steamship Company (although since 1990 it has sailed as the Walter J. McCarthy Jr., after the then-newly retired chair of the board of Detroit Edison; its cargo is mostly coal carried from Superior, Wisconsin, to Detroit Edison plants in Michigan); and Dave Dart is still a proud part of the Bay Shipbuilding family.

“Always the inside joke was, we have more people from the shipyard than we have in our own family,” he said. “We’ve raised children together. We’ve lost children. Most of us have lost our parents. We give one another a hard time, but if you pick on one of us, you can bet there’s a half-dozen who will come to protect you. This guy’s got your back — or lady. We’ve got a lot of ladies here.”

This fall, as Dart was celebrating his 43rd year with Bay Shipbuilding,  the company itself celebrated its half-century in business.

The story of shipbuilding in Door County actually begins in the spring of 1896, when August Rieboldt and Joseph Wolter moved their shipbuilding business — Rieboldt, Wolter & Company — from Sheboygan to Sturgeon Bay. Their first job in June of that year was  refastening the stern bearings on the tug Leathem.

Upon the impending retirement of Rieboldt and Wolter, a new company was incorporated, and in May 1918, Universal Shipbuilding began business. It operated under that name for almost two years before becoming the Sturgeon Bay Shipbuilding and Dry Dock Company.

The Christy Corporation began business in 1881. The corporation was a collaboration between John Leathem and Thomas Smith, which they called the Leathem & Smith Towing & Wrecking Company. In 1920, Smith’s son, Leathem Smith, took over the operation and restructured the business to include ship repair, renaming it the Leathem D. Smith Dry Dock Company. The name was changed again in 1933 to the Leathem D. Smith Coal & Shipbuilding Company, although the word “Coal” was eventually dropped. Leathem Smith drowned in a yachting accident on Green Bay on June 23, 1946, and the next year, former general superintendent C.R. Christianson organized a new entity called the Christy Corporation.

In June 1968, the Manitowoc Company closed its Manitowoc yard and bought the two neighboring shipyards in Sturgeon Bay — the Sturgeon Bay Shipbuilding and Dry Dock Company and the Christy Corporation — making way for the creation of Bay Shipbuilding: a single, 50-acre complex capable of serving any vessel on the Great Lakes.

“It’s a cyclical business we work in,” said vice president and general manager Todd Thayse, who is nearing his 35th year with Bay Shipbuilding.

He joined the company in 1984, at the high point of a cycle when the company landed contracts to build three saltwater container ships for SeaLand Service, a global container company headquartered in Florida.

Some low points followed that had everyone questioning the future of shipbuilding, but the company survived and has enjoyed some strong years during the 21st century.

“We have been in a high hiring period for a number of years,” Thayse said. “The sector we serve is closely tied to the petroleum business. In 2014-15, our petroleum business was hot. They could not build enough barges. Every shipyard in this country was chock full.

“Then there was some downturn with the downturn of fuel prices. There were investments that ended up not happening. But we had a significant backlog that helped us bridge most of that. At one point we had 11 projects we had to deliver. That was really unheard of. Things lined up for us pretty perfectly.”

The company has regularly employed between 600 to 800 people, with the ranks growing to as many as 1,200 when the Great Lakes commercial fleet is in for repairs during the winter. 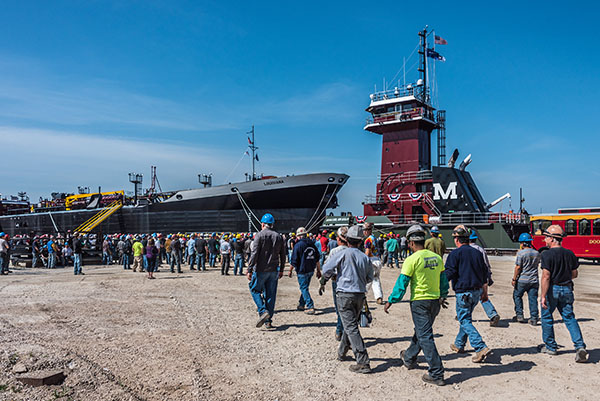 A large crowd gathered at the Sturgeon Bay shipyard for the May 20, 2016, christening of two new vessels built at Fincantieri Bay Shipbuilding — the Barbara Carol Ann Moran, a steel hull tugboat, and a barge called the Louisiana. Photo by Len Villano.

“When you get from 10 to 15 vessels in there, you need some more bodies,” said Julie Koch, manager of contract services, who joined the business about the same time as Thayse.

“We started a winter fleet program for trades that don’t work in the winter — landscapers, homebuilders. We bring them in for the winter. They’re not going to be a shipfitter, but they can be helpers. That’s helped us out. A lot of times we have to rely on subcontractors to bring people in.”

Koch is also responsible for working with area businesses that service the Great Lakes fleet.

Dave Dart referred to himself and other senior employees as Koch’s contact with the yard work.

“She gets so busy. She doesn’t have time to check on everything,” Dart said. “So we’re her eyes and ears to tell her what’s going on.”

Koch agrees. “When a vessel comes in, you know about certain work. You have a general work list,” she said. “Then you go on a survey with an owner, and you start working on those [stated repairs]. Then Dave starts working on a piece of steel, finds bad steel. We get the owners involved, have dialogue and determine how to progress. It’s a constantly evolving and changing process.”

Koch also has praise for Dart’s leadership with younger employees. 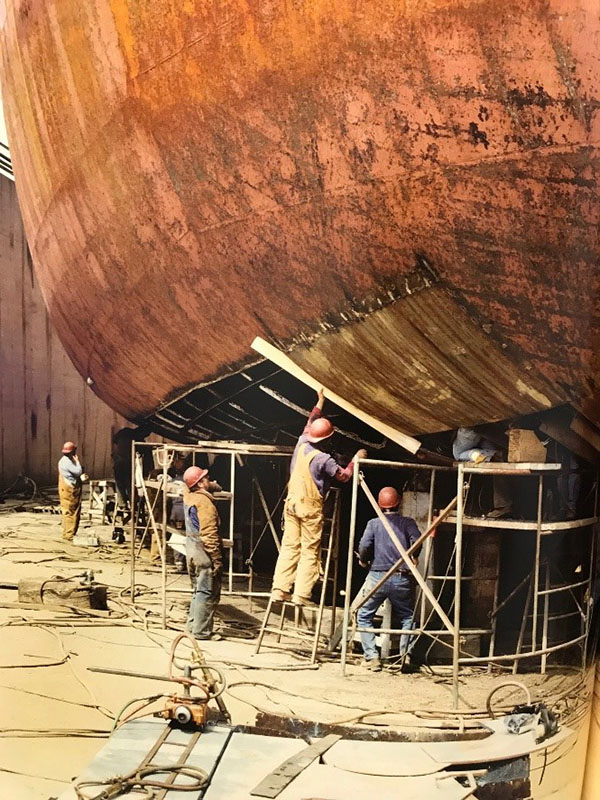 The underbelly of a ship at Bay Shipbuilding in the 1970s. Submitted.

Dart, a third-generation shipbuilder, is nearing retirement and looking forward to having more time to spoil his grandchildren.

The importance of promoting safety was driven home when Dart  had to send a co-worker to the hospital when he got something in his eye.

“As protocol, you call the family member, but you don’t tell them what’s wrong,” Dart said. “The look on that wife’s face. I met her at the gate. She had a look on her face like she knew her husband was hurt bad. I don’t ever want to go through that again.

“That’s my motivation: to make the job as safe as possible. She’s looking at me, thinking her husband has been killed. It bothers me. You think the worst right away. I think all people do that. That wife coming to the gate is ingrained in my mind. Everything was OK, but it’s our nature to think the worst.”

Energy companies will continue to provide a source of work for the shipbuilder, Todd Thayse said.

“Liquified natural gas [LNG] as a product burned in the engines — that is hot and topical. We’re in the middle of a couple of opportunities there, and then LNG as a product to haul,” he said. “There is not a lot of equipment that hauls it in the U.S. It requires some unique pieces of equipment. That certainly seems to be the way of the future.”

Management negotiates with four unions within the company, but despite the positioning that involves, Thayse said the family atmosphere came to the fore this year during a 50th-anniversary celebration that brought current and past employees together.

“It was really a feel-good day for us,” he said. “I think that’s one of the strong points of our company: people really watch out for each other. We’re here to serve our customers, provide a good service and product, and pay a good wage and benefits that are family sustaining. That’s what I think we do.”