It was my wife who reminded me one time that there is a whole new world of discovery in studying nature. A person living with nature can never be a “know-it-all” simply because there is too much to learn. That thought occurred to her as we were listening on the radio to Dvorak’s New World Symphony while watching an exciting bird episode in our front yard.

New discoveries along the way make even our most simple annual rituals memorable events. Within a month we will be tramping into a few of our favorite open cedar swamps, home to colonies of Skunk Cabbages, one of the true native plant harbingers of spring. Notice I said “native” plant harbingers. Surely some non-native, ultra-early spring bulbs planted along the sunny south side of your house may beat the Skunk Cabbage to flowering. 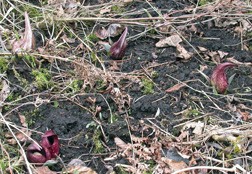 What the crow is to the woods and the Horned Lark is to the wide open fields, so too is the Skunk Cabbage to open cedar swamps and marshes, moist ditch banks, woodlands and low stream borders. It’s the first breath of spring despite the snowy surroundings. All three – the crow, Horned Lark and Skunk Cabbage – can slough off unseasonal wintry blasts for several days with little to no visible effects. In fact, the Skunk Cabbage, with several other members of the fascinating Arum family, has a built-in source of heat, as much as 22 degrees F above that of the air overhead.

Two wild creatures, one a native to the U.S. and the other an import from Europe, are known to depend upon the Skunk Cabbage plants in early April. Our native Black Bear, coming out of hibernation soon, is said to eat the thick, long, fleshy, white roots. All I can say is the bear must possess a so-called “cast iron stomach” because the root of this plant, like another close relative, the Jack-in-the Pulpit, is called the “memory root” for a good reason. Once you have tasted it you’ll never forget the intense stinging sensation trickling down your esophagus brought about by its thin needle-like oxalic acid crystals. Trust me. I was tricked as a youngster into tasting this “Indian candy” many years ago.

The honey bee, imported to the U.S. from its native Europe, uncannily locates the hidden flowers of the Skunk Cabbage and consumes the pollen from its many tiny flowers. These incredibly early bloomers beat even the catkins on the Willows, or Pussy Willows, whose pollen is also important to the hive bees. 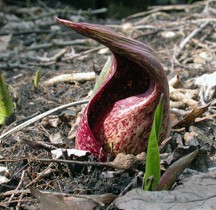 The Skunk Cabbage has a remarkable streamlined shape.

Hopefully our March doldrums will have disappeared by early to mid-April this year, when along comes a sunny day and you set out to look for signs of spring. Suddenly you’ll look down along the edge of the cedar swamp and see what amounts to a circular tunnel mysteriously melted through the six-inch layer of snow and ice. Near the bottom of the tunnel is a strange, dark red, partly-enclosed shell-like object with a greatly curved but very pointed tip.

The entire oddity is about four to six inches tall. You have discovered the genuine plant harbinger of the spring season, the Skunk Cabbage. Its scientific name is Symplocarpus foetidus. Two Greek words, “symploke” and “karpos,” refer to “connected fruit,” while its species name of foetidus (FEE-ti-dus) means evil smelling.

Various references list the plant as having an odor somewhat like a combination of skunk, putrid meat and garlic. Frankly the plant has never offended me nearly that much, even when I experimentally cut into one of them. It is true that its meaty color and slightly rank odor attract carrion flies and beetles, its original pollinators dating back many eons. Today it is invariably the imported hive bees that are the first to find and accidentally scatter some of the pollen of the Skunk Cabbage flowers.

That close relative of this plant, more familiar to those who enjoy the spring woodland wildflowers, is the Jack-in-the Pulpit. Jack’s pulpit is the spathe while Jack, the preacher, is actually the spadix. The horn-like object of the Skunk Cabbage is the spathe, fleshy, insulated with thousands of tiny air cells and having quite a pointed shape. Colors range from yellow-green, mottled with brown, purple-red, to some that are nearly an intense solid deep red. 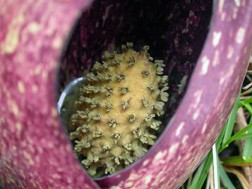 Each yellow spadix can produce about 50 seeds.

The barrel shape of the spathe traps and holds heat very well which actually rises into the peak, helping to melt the frozen ground or ice and snow above it. Peering into the narrow opening reveals the pale yellow spadix (like the “Jack” in the pulpit) the oblong, oval-shaped compound fruit entirely covered with more than 50 tiny individual flowers, the ovaries of which are imbedded within the spongy spadix.

Dr. Albert Fuller, former curator of botany for many years at the Milwaukee Public Museum and primary founder of the Ridges Sanctuary, said that an individual Skunk Cabbage plant may live for 100 to 500 years. It is a very unique wildflower having no other closely related species in Wisconsin. Our species, foetidus, can be found in only two regions on Earth, in eastern U.S. and in China and Japan located in eastern Asia. Of interest is the fact that a number of other plants, including the rare Ram’s-head Lady’s-slipper Orchid, American Lotus and the Tulip Tree have precisely the same distribution. 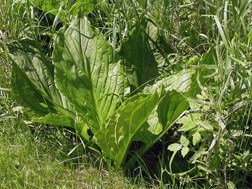 These are the fully formed leaves seen in early June.

It is assumed that the Skunk Cabbage had a very wide circulation in the Northern Hemisphere back in the Cretaceous Period, approximately 65 to 135 million years ago, and since then has died out except in these two regions. The thought is that the Skunk Cabbage is among the oldest of all modern-day flowering plants.

In May, or occasionally at the same time as when the spathes are at their peak, the leaves will have appeared like thick, light green spears piercing their way out of the swampy ground. By summer they will resemble two- to three-foot-tall, foot-wide, heart-shaped “elephant ears” displaying a definite quilted texture. They are very exquisite to say the least.

Hike to the people-less swamps in early to mid-April in quest of those splendid spring harbingers, the Skunk Cabbages. At the same time you are kneeling down to admire their great and unique beauty, pinch yourself and thank your lucky star that you have entered a whole “New World” of discovery!