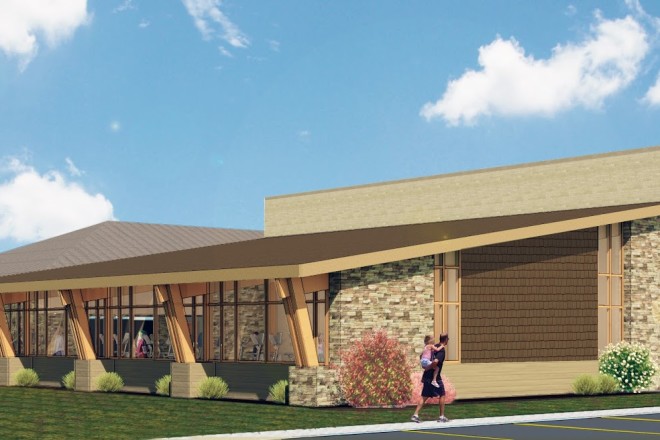 A conceptual drawing of the lifestyle center expansion at the Northern Door YMCA. Submitted.

The Northern Door YMCA is a place that shouldn’t really exist. It’s a 28,000 square foot facility with the amenities of an urban gym. It serves 2,300 members every year and even more drop-in visitors. But it stands up the hill from a town of just 200 people.

“It doesn’t make any sense at all, but it works,” said Drew Richmond, executive director at the Northern Door Program Center. “There’s a cost to it, it’s not free. There’s money that’s attached to making sure this place works. But statistically speaking, this place should not exist, but it does.”

And the visitors to the center are reinvesting $2.5 million into improving the facility with a new lifestyle center and other updates around the building. Construction on the lifestyle center addition is underway and expected to be finished by June; they’ve been ahead of schedule so far.

“There are those of us that recognize that this place is an anomaly, it shouldn’t be here,” said Allison Vroman, Healthy Living Director. “There’s a community out there that supported it enough for the initial fundraising to put it here and there’s a supportive community to this day to keep improving.”

Richmond believes the reason they are so supportive is because of the relationships they build with the facility and its staff. At the 2,000 YMCA facilities across the country, the tone has changed from a place of exercise to a place of community. 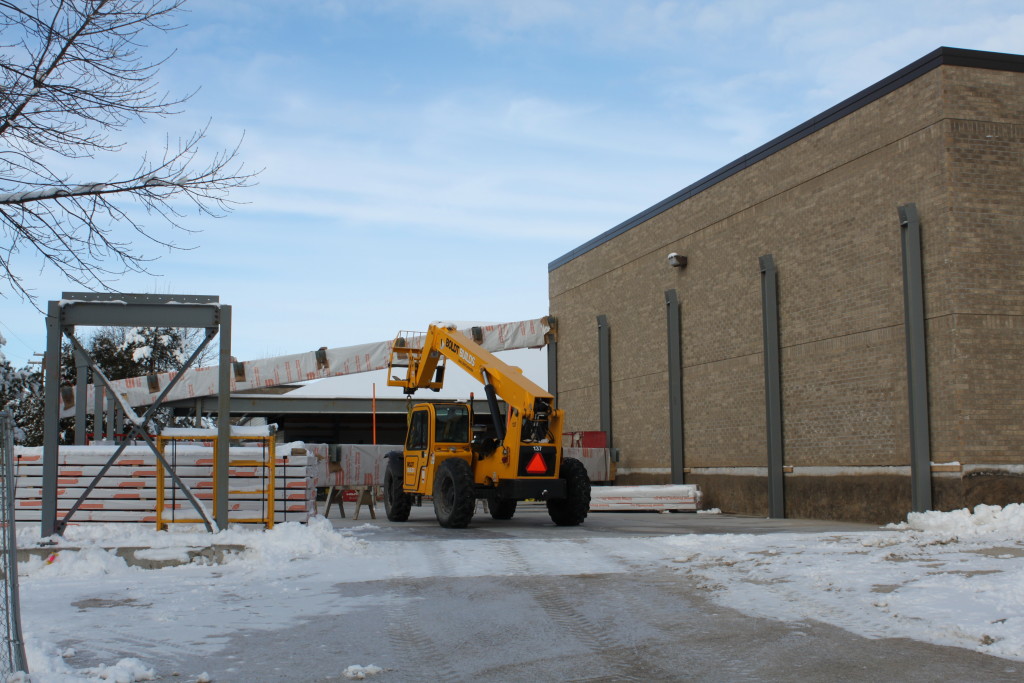 With the change in the broader focus of the YMCA nationally, a new light is cast on the lifestyle center addition to the Northern Door facility.

By putting the lifestyle center away from the center of the building, it encourages a flow of people throughout the entire building, rather than a way to get them in and out as fast as possible. Members also don’t want to be visible from all angles of the windowed room while doing their squats and elliptical sets. This promotion of flow through the building draws on a broader goal that the YMCA strives for, or why facilities across the country have turned from places of exercise to the social hubs of their communities.

“Y of the USA has done a lot of research and partnered with folks to try to find out why that is and they have concluded that society today is still searching for what has left them behind,” said Richmond. “You don’t know your neighbor as much as you used to, you don’t see social groups as much as you used to, and people are a little more skittish to meet new folks than we’re used to. However, they still want to socialize, they still want to be a part of a group. YMCAs have really become that consistent space where people can gather to get all of those social needs that they still have but they are not finding from their neighborhood.”

Consistency is the key to this success, and it’s one of the challenges that the center struggles with like any other business in the seasonal nature of Northern Door. The term “snowbirds” is used around the YMCA office as much as anywhere else in the county. 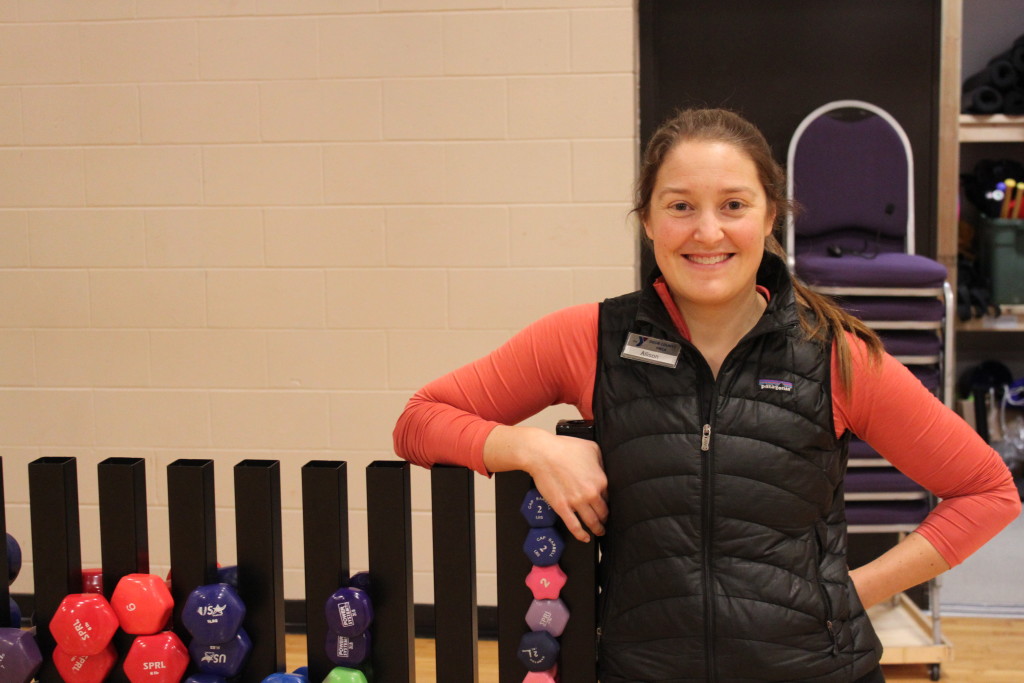 Allison Vroman prepares for her Silver Sneakers class in the morning. Vroman increased the number of participants in the class but still maintains a wait list for the popular year-round activity. Photo by Jackson Parr.

“November is this phenomenal time at the Y where you’ll see faces that you haven’t seen in six months,” said Vroman. “They start to trickle back in and it’s kind of that old friend who’s returning for a visit. The population that frequents us in the summer is different than the population that returns to us in the winter.”

Vroman’s programming shadows this changing population as well as everything else going on in the community. An eight-week cycling class in the dead of winter may not be as successful in the summer when schedules tighten up and members would rather ride a bike outside. When Little Vikings basketball is in full swing at Gibraltar Schools, archery or youth yoga kicks off at the YMCA instead of basketball programming. After three years coordinating programs year round, Vroman said she is just starting to get a feel for how seasonality works at the YMCA.

But she also battles staffing shortages similar to all businesses on the peninsula in the past year.

“It’s unfortunate, but the reality is that, due to our geographic location and isolation, we are limited by the qualifications of the staff we have to teach those programs,” said Vroman. “We get a lot of people saying, ‘Hey, I came from Chicago and I had this jazzercise class that I loved. You guys should get jazzercise.’ Well I need a jazzercise instructor in order to be able to teach that program.”

Not just one jazzerciser, but at least three. Three is the magic number of instructors to put on a class frequently and consistently enough to catch on. Vroman and Richmond also hope those instructors are in it for the long haul.

“Our goal is to be as consistent as possible,” said Richmond. “Every Monday morning you’re going to come and check in and see the same person every single Monday morning whether its December or August and people rely on that, people appreciate that…We’ve got these programs like step classes and the Silver Sneakers classes that reach our senior populations that have been around for a decade and it’s the same instructor. So for the consistency component, it’s been at the same time of the same day with the same instructor for 15 years. When you talk about customer service, it’s all about that expectation of that member for the service that we’re providing.”

That consistency is one of the few concerns that YMCA staff will have to navigate when the new lifestyle center opens this summer. The new space will create a different movement throughout the building and, after the final $130,000 fundraising goal approaches, two new multi-purpose rooms for more programming.

“We’ll need to get used to how the new building works because it really will have an effect throughout the entire facility,” said Richmond. “If you think this is where your class has been, in this room for 10 years or 15 years, it’s now going to be in a different room and it’s going to be on a different floor and a different space…People take a bit of time to get acclimated with the new spaces.”

But after that acclimation has taken place, members of the YMCA and surrounding community will get to see the return on their investment into health and wellness.

“This center sees over 2,000 members a year,” said Richmond. “When it was originally built, 15 years ago, it was not necessarily prepared to see that many people…This community has reinvested $2.5 million into this place and our job is to make sure that 15 years down the road that this facility is still here, that it’s ready for whatever the community needs.”

Of the relationships the YMCA has built with the community, none may be more involved than with Ministry Door County Medical Center (MDCMC). The two organizations have teamed up on a program at the YMCA to help those suffering with Parkinson’s disease, a degenerative disorder of the central nervous system, targeting motor skills. The class pairs a fitness instructor from the YMCA with a physical therapist from MDCMC to work with patients on these motor skills.

“For whatever reason, there is a large concentration of individuals with Parkinson’s in Door County which was kind of the impetus to start the class,” said Allison Vroman, Healthy Living Director. “Between the two organizations with our physical space and the equipment that we have, along with the medical expertise of a physical therapist, we could serve this population.” 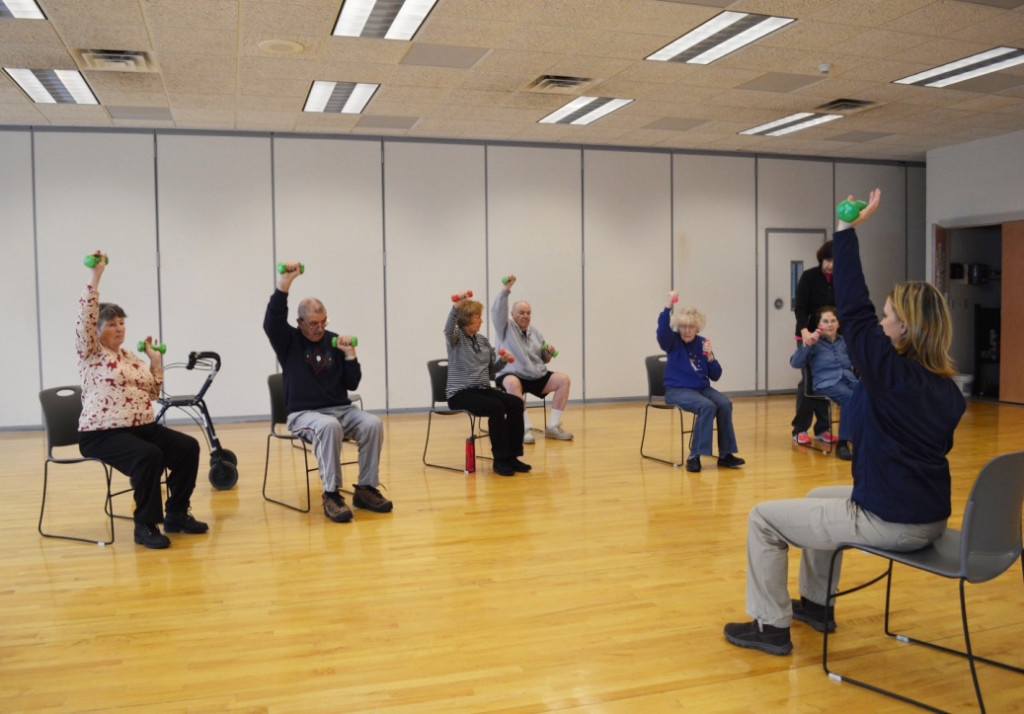 The Parkinson’s class combines strength, flexibility and mobility to keep those suffering form the disease in touch with their motor skills. Submitted photo.

The class consists of walking on the treadmill to engage muscle groups that will help a person go out into the world safely and confidently and retraining the concept of gait as the neurological disease takes over. Then, participants perform strength and flexibility exercises to keep them physically fit. The fitness instructor leads the group while the physical therapist is there for the unique needs of Parkinson’s patients.

The expansion of the lifestyle center will improve this relationship by giving members more space and better equipment to participate.

“When you are a therapist working with a Parkinson patient at the Y on a treadmill, our space right now doesn’t allow for that to effectively happen,” said Drew Richmond, executive director at the Northern Door Program Center. “What this new space allows us to do, is not only to get more treadmills that are able to work with folks a little bit easier, but also the instructors or the therapists can actually be next to the machine.”