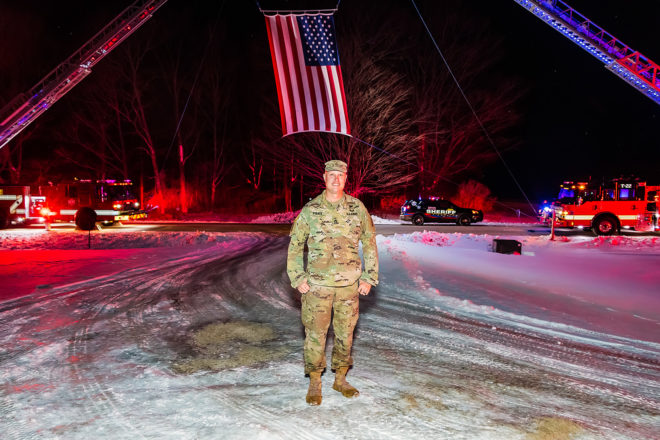 Jason Staats was welcomed home with a massive flag displayed over his driveway by his fellow firefighters. Photo by Len Villano.

Brennan Staats couldn’t have asked for a better birthday present.

Last year, on her Dec. 1 birthday, Brennan’s father, Staff Sergeant Jason Staats, was deployed. This year, on Dec. 5, he came home. It was a bit of a belated seventh-birthday gift, but Brennan wasn’t about to get picky, smiling ear to ear after riding with a firetruck escort from the Door County line all the way to her family’s home on Jarman Road in the Town of Sevastopol.

“We really enjoyed the moments we had with our dad on the drive,” said Brennan’s older sister, Braelyn, age nine. “We’re happy to have him back.”

And Jason is happy to be back home with his wife, Nicole, and their five children who live at home.

“I had no idea about any of this until my wife pulled over on the highway at the county line,” he said as the lights of a dozen firetrucks flickered in his driveway. “This show of support is amazing. It’s a small town, small community, and this just shows the support we have for each other.”

Staats is a captain with the Egg Harbor Fire Department and an emergency-room nurse at Door County Medical Center. He has spent the last five months stationed at Forward Operating Base Fenti in Jalalabad, Afghanistan.

When he pulled up to his house at about 6 pm, he saw ladder trucks from the Sturgeon Bay and Sister Bay Fire Departments flanking his driveway, with a gigantic American flag lit up between them.

“That was the best part – to see that,” he said. “That’s what we’re fighting for. When we’re over there in Afghanistan, 99 percent of the people we meet are great people, and their whole dream is to come to the United States. They’d give you everything they don’t have to come here, so you just have to believe we’re doing something right.”

Now that he’s home, Jason said his first step will be to adjust to new smells, new sights and the sensory overload of being home. His youngest son, Jethro, however, does have priorities for him. Jethro learned to talk while his father was overseas, and now that Jason is home, Nicole said Jethro is ready to play trucks with his dad.

“The rest of us are just excited to be able to give him hugs,” she said.