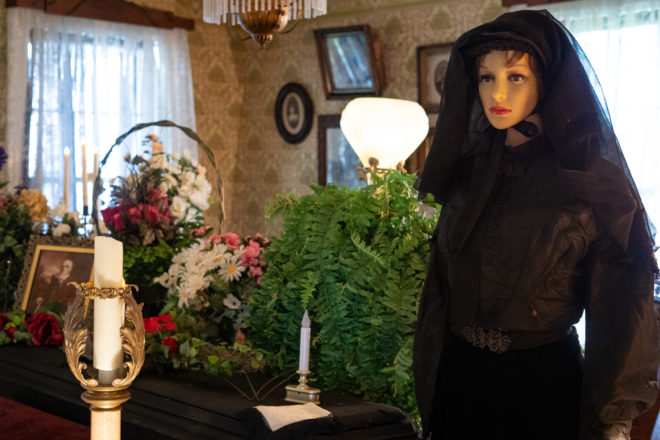 The funeral exhibit allows the Gibraltar Historical Association to show off special items from its collection such as hearse horse plumes, a pine coffin and a handkerchief ringed with black lace. Photo by Rachel Lukas.

A House in Mourning exhibit brings Victorian funerals to life

Dead men – and women – tell their tales this summer during the Alexander Noble House Museum’s A House in Mourning exhibit. As a display showcasing the rituals and oddities of Victorian-era funerals, it’s an exhibition that’s as fascinating as it is grim.

Step inside the house at 4167 Main St. in Fish Creek – which is on both the Wisconsin and National Registers of Historic Places – to transport yourself to 1875, when the Noble family built the structure following a fire that destroyed their cabin.

The exhibit walks visitors through many of the funeral traditions and etiquette rules that began in America after the Civil War. For families that lived during the Victorian era, mourning was a set period filled with customs and requirements that had to be followed over the course of three months to two years.

Family members of the deceased, for example, were expected to wear black clothes that became more ornate and detailed the more closely related the person was to the deceased, according to Laurie Buske, director of the Gibraltar Historical Association. One of her favorite pieces is a mourning dress with detailed felt stitching and black tulle.

“The craftsmanship is above the rest,” said Buske, who is knowledgeable about tailoring. “Creating a beautiful piece is about knowing the characteristics of the fabric.”

The ensemble also includes a veil that showcases intricate beading. One rule that applied to all funeral attire was that the fabric had to be dull and nonreflective because any reflection could draw death in.

The Origin of Modern Funeral Traditions

Some memorial and funeral traditions that we adhere to today originated during the Victorian era.

For instance, during the embalming process – which could take two to three days – the body had to be watched at all times, Buske said, in case the person wasn’t actually dead, but was merely unconscious or in a coma. That’s why modern-day wakes are called wakes, she said: The family would wait to see whether the person would wake up.

The embalming process itself is another modern-day holdover that got its start around the Victorian era. Buske said the practice, initiated by Abraham Lincoln to preserve soldiers’ bodies while they were being returned to their families, was usually done by a midwife.

“The person who brought you into this world would take you out,” she said. “It was kind of one of the first jobs women had.”

Much of this sounds morbid, Buske said, but death felt more commonplace and familiar during the late 1800s and early 1900s, when these practices were common. The funeral period lasted about a week, during which time visitors came through the house to visit the grieving family and view the body.

When people – especially children – died, Buske said families would take photos in which the deceased person was made to look alive. Because photographs were expensive, posing with the dead body was the only way to get family photos.

Customs of the time also had many intricacies, Buske said, such as small cookie or cake-like desserts that had poems inscribed on them and were wrapped in thin, black fabric; or photos in small frames only slightly bigger than a 50-cent coin.

One of the most impressive items in the exhibit is a head wreath made out of the deceased woman’s hair, which had been collected throughout her lifetime. It’s twisted and braided into patterns of butterflies and flowers made completely out of tiny strands of hair.

“We don’t do any level of this stuff now,” Buske said.

Although the exhibit isn’t new to the Alexander Noble House Museum – the Gibraltar Historical Association has run it on a three-year rotation during the past decade or so – new artifacts acquired in between showings give audiences a new experience.

The funeral exhibit opened this month, but it takes Buske the better part of the month prior to set up the displays – properly dressed mannequins, original artifacts from the house and the era, and a distinctly lived-in air – that will be on display until the museum closes for the winter in October.

As was said during Alexander Noble’s eulogy, “The silent and grim reaper, Death has again invaded our ranks, and another of the craft has been summoned to that shore from whose bourne no traveler ever returns.”

The rituals and practices surrounding Victorian funerals were often steeped in superstitions about, and fears for, the deceased soul and the living ones still in the house.

Some traditions were purely practical: Placing pennies on the deceased’s eyelids would keep them shut, for example, and six-sided coffins required less dirt to be dug than rectangular coffins.

When someone died, the residents of the home hung a black, nonreflective sheet of fabric on the front door and windows to inform others that the household had entered mourning, and they covered all of the mirrors inside the house with black cloth to prevent the spirit of the deceased from being trapped inside the mirrors.

Clocks were stopped at the time of death and would resume only after the body was buried, and any pictures were turned face down so that the living people pictured in them wouldn’t be taken next.

Even the coffin had to be carried in a specific way when the deceased was moved or finally exited the home: feet first. There were two reasons for this: The feet would land first if the body fell out, and the eyes of the deceased would not look back at the pallbearers and take them along to the afterlife.