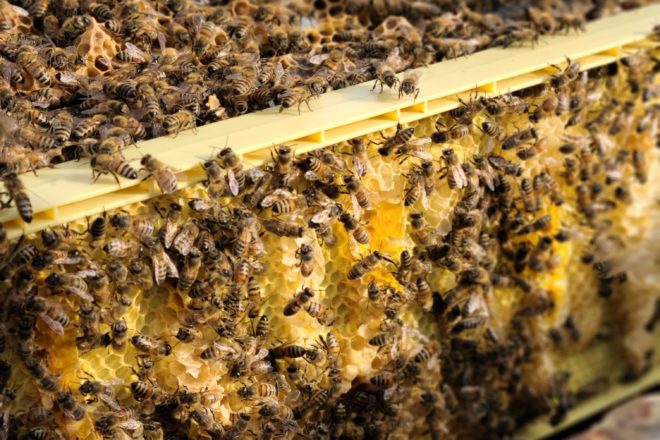 It started at Martin’s job at the U.S. Potato Genebank. There, he pollinated potato flowers by hand, but he asked Sturgeon Bay beekeeper Paul Eggert about the possibility of using honeybees for the job. The honeybees Martin started out with refused to help him, but they did kick-start his interest in beekeeping.

Soon, Martin’s first bee box became two, and two became three – and now, 24 years later, Martin has 24 hives, which produce about 1,500 pounds of honey a year. That’s roughly 14 five-gallon buckets of the stuff, which he sells to Welsing’s Foodland, The Clearing and farmers markets in Sturgeon Bay and Fish Creek.

In addition to keeping his own bees, Martin has passed on the skill to other locals through DCBC, which now has around 85 members.

Geared toward beginning beekeepers, the club meets monthly to discuss how to keep hives healthy and troubleshoot any issues.

DCBC members also do “hive dives” before their meetings by heading to a member’s home, donning beekeeper suits and cracking open the host’s bee boxes to look inside. Exploring the inner workings of a hive first-hand is especially helpful for new beekeepers, Martin said.

So is having a network of experienced mentors, DCBC co-founder Gretchen Schmelzer said. Without that, beekeeping could be a daunting hobby to begin.

When Schmelzer got her first package of bees (DCBC members can order bees through Martin, who picks them up in Sullivan, Wisconsin, and drives them to Door County), she placed them gingerly in the back seat of her car and nervously listened to the box buzzing as she drove home.

“I was thinking, ‘Who does this?’” Schmelzer said.

But when she got to her house and let the bees out with her son, who’s also a beekeeper, she was fascinated with her new hive.

“I’d have a chair there next to my hive, and I would just sit there and watch them fly in and fly out,” Schmelzer said.

In addition to helping new beekeepers, DCBC hosts outreach events to educate the community about bees. One such event was the Aug. 20 Community Honey Harvest, where Schmelzer and other DCBC members immersed visitors in the world of beekeeping.

Doing so was a multisensory experience. At one booth, attendees could taste chunks of fresh honeycomb, broken off from a sticky-sweet sheet; spoonfuls of bee pollen – high-protein, nutty-tasting granules; and tiny cups of mead, a wine-like beverage made with fermented honey.

At another booth, guests could feel thin sheets of beeswax before they were rolled up to make candles, or pour granules of wax over fabric to create reusable food wraps.

Outside, the stars of the show could be heard as they buzzed in and out of their boxes. Visitors watched as DCBC members harvested honey using a flow hive, which allows honey to pour out of the box, through a tube and into a beekeeper’s waiting jar.

The Benefits of Bees Are Everyone’s Beeswax

One of the goals of the event – and the club in general – is to educate the community about how bees help them. In addition to producing wax and honey, both of which have medicinal properties, bees pollinate native plants, commercial crops and gardens. In doing so, Schmelzer said, they help both the environment and the local economy to thrive.

Despite these benefits, even Schmelzer was nervous around bees at first. But, she said, getting stung isn’t as much of a threat as some might think. During her eight or so years of beekeeping, Schmelzer said she has “only been stung when I’ve been stupid.”

In reality, bees don’t want to sting you. It’s a defense mechanism – generally used when they sense they’re trapped or feel there’s a threat to the hive – and one that costs them their life.
When a honeybee stings, the stinger becomes embedded in the skin of the perceived threat, such as a human. When the bee pulls away after the sting, it self-amputates its lower abdomen, leaving the stinger embedded in the recipient and a gaping hole at the end of its abdomen. It’s a gruesome death that they would obviously rather avoid.

But sometimes, as Schmelzer said, the “stupidity” of beekeepers – moving too fast through a hive inspection, or trapping or pinching a bee by mistake – can trigger a sting.

After 24 years of occasional mistakes, Martin has developed an immunity to stings. When he gets stung now, “after about five minutes, I could not tell you where the sting was,” he said.

The frustrations of beekeeping often hurt more than the stings.

For example, he has done extensive research on how to “overwinter,” or keep a hive alive through the colder months, but sometimes, despite his best efforts, large numbers of bees die before the spring.

Still, to Martin and Schmelzer, the satisfaction of keeping bees makes the difficulties worth it: She loves watching her hive work, and he enjoys learning about bee behavior and passing his knowledge on to others. They love what they do – even when it stings.

Learn more or join the DCBC by visiting doorcountybeekeepersclub.org. The club’s annual membership is $20 per person or $30 per family.