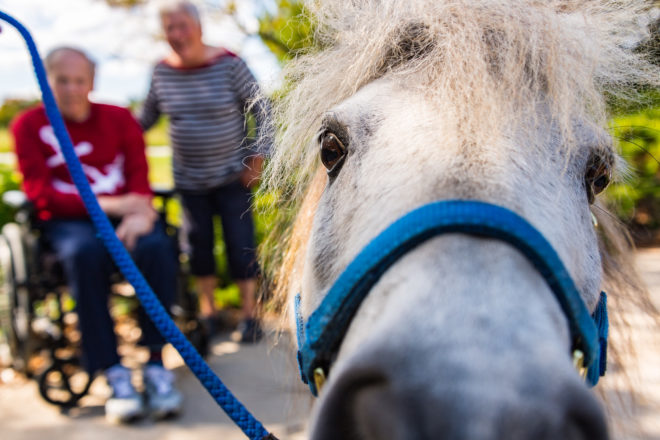 Triscuit is ready for his close-up, Mr. DeMille. Photo by Len Villano.

Unless, of course, the horse is the famous Mr. Triscuit

Don’t call Triscuit a pony. That’s an insulting word for a full-grown horse, even if he is of the miniature variety.

Miniature horses were bred selectively to be small – even smaller than some dogs. To qualify for mini-horse status, the animal may not exceed 34 inches in height from the last hairs of the mane, according to the American Miniature Horse Association.

At 28 inches tall at the withers, Triscuit easily fits into the category of miniature horse, but his gentle disposition and apparent love for people puts him in another category: that of therapy horse.

“I never in a million years would have come up with this,” said Carolyn Hitzeman, Triscuit’s owner. “It all evolved from what my husband would enjoy.”

Erv Hitzeman, her husband, is a community-minded former village president of Sister Bay and a former manager of Lampert’s Lumber for a quarter century. This story starts in 2009, when Erv had a heart attack that caused a blood clot in his brain, which resulted in a major stroke.

“After he recovered enough to know how bad this really was, he said, ‘I don’t want to live if I can’t do things and can’t be of any use,’” Carolyn said, and she understood that because he had always been so active. “He can’t read. His short-term memory is abysmal, and his long-term memory is excellent. We sat down one night and said, ‘We’ve got to find a hobby.’ He never had a hobby because he always worked, and we had five kids.”

The couple made a long list of potential hobbies and ended up laughing hysterically at the absurdity of some of them, given Erv’s situation.

“He said, ‘I ought to take up wood carving. That ought to do it. Or maybe target practice,’” Carolyn said. “Finally, he said, ‘I love horses. I would love to have a horse again.’ My husband had horses when I met him. We met when we were in high school. I had ponies. We both always loved horses – that’s the first thing to know. Horses have always been very important to us.”

Upon further reflection, they decided horses would be too big and dangerous for Erv, who is wheelchair-bound.

“So we just let it ride for a while,” Carolyn said.

“I just happened to read two articles that talked about miniature horses and therapy horses,” Carolyn said. “A lightbulb went on. There are little, tiny horses. This might be something he’d be really interested in.”

Carolyn began doing online research about miniature horses and learned there was a breeder in Chilton, Wisconsin.

“They were really pretty, and she had some for sale,” Carolyn said.

She explained the situation to the breeder and asked, “Do you think this is crazy?” The breeder said no. She had just sold a horse to a horse-loving woman who had suffered a stroke. Carolyn said she would take her husband to the breeder’s facility to see whether he was really interested.

“We put him in a pen with a bunch of the mares, and he just loved it,” she said.

But Carolyn didn’t want to get just any miniature horse: She wanted a therapy horse that she and Erv could use to give joy to others. That’s when the breeder said, “I have the perfect horse for you,” and she introduced the couple to Triscuit.

“She said he had been exposed to a lot of people, and she always used Triscuit to meet people,” Carolyn said. “I said we definitely wanted him, but we wanted two. They’re herd animals. They’re lonely alone. Erv said we have to have two. We picked out Oreana, a mare.”

Next Carolyn designed a barn – a shed, really – for the two horses and learned about electric fencing.

“I had to fence the pasture. It was a challenge, and I’m really proud of it,” she said. “I made the fencing around the house, so where Erv sits all day, he can see them in the pasture. They run and play, and he loves it.”

There was an added benefit to having the tiny horses frolicking on their property: People wanted to see them up close.

“People heard about them, and I said, ‘Come up and visit them,’” Carolyn said. “People I didn’t even know were coming. I always say, ‘I want you to come in and meet my husband.’ So he had people in the house. That was a huge thing. If someone’s handciapped – though I’ve taken him everywhere until recently – he’d sit here all day with nothing going on, basically. He’s happy if people come and visit.”

“We’re up to about 380 people who have been up to see these horses over seven years,” she said. “It’s been a really good thing. We very much encourage visits. It’s just word of mouth. That’s been a real plus.”

It wasn’t long into having the two horses that Carolyn realized an added, personal benefit.

“I’m with the horses feeding them a few times a day,” she said. “They love people. It’s good therapy for me. When I’ve had a tough day, I go out, and the horses love me. The barn is quiet, and it smells like hay. It’s really therapeutic. It’s turned out the horses have been a huge benefit to both of us.”

The next part of Carolyn’s master plan to make Erv feel involved again came the next year when she purchased a small utility trailer into which her son-in-law, Joe Thomas, put windows.

“The back comes down and makes a ramp. It’s perfect,” she said. “I had their names put on it and a picture of a horse on the back.”

Then she contacted the activities director at Scandia Village to say that she and Erv would like to visit residents with their therapy horses. They’ve been visiting every month since – outside during the warm months and in the chapel with just Triscuit during the cold months.

“You cannot believe the number of people who have come to see these horses at Scand. They just love them,” Carolyn said. “I had one guy a couple months ago. They told me he’s new, and he doesn’t talk. He just touches his finger to your finger. That’s how he communicates. We had Triscuit there, and pretty soon he’s talking to Triscuit and smiling. So it’s really, really rewarding.”

“Anytime we can bring in a four-legged, furry animal to these people, they just light up,” said Karen Sporrer, activities assistant at Scandia.

Carolyn enlists volunteers to help get the horses ready for the therapy sessions.

“It takes a number of us to pull this off,” she said. “It takes four of us to get them cleaned up because they roll in the dirt. We shampoo them with rosewater shampoo, and we wash their mane. They love it. But you can’t do it until the last minute. If you let them loose, they will roll, and they’ll be filthy. It’s a project. And I always have two people with each session.”

Carolyn has found that people naturally want to feed the horses, which she has discouraged from the first.

“We do not ever feed them out of hand. The breeder taught me that,” she said. “Once they learn food is in people’s hands, they might nip, so I’m very firm about that. They don’t bite because they don’t think there’s going to be food there.”

As the breeder predicted, Triscuit has turned out to be a superstar therapy horse, reveling in the human attention.

“Oreana’s fine. She’s really sweet, but pretty soon she gets tired of it. She’s not quite as into it as Triscuit is,” Carolyn said.

“I had a picture from several years ago of a woman who just loved Triscuit. He has his head nuzzled up by her neck. She’s petting him and smiling her biggest smile. Pretty soon he’s almost going to sleep, he’s so relaxed.

“I’ve had people tell me that when their relative died, they had pictures at the memorial service of Triscuit with their relative. That’s kind of a bright spot in their time there. I’ve just found that it’s been a really good thing.”

Carolyn and Erv Hitzeman with Triscuit. Photo by Len Villano.