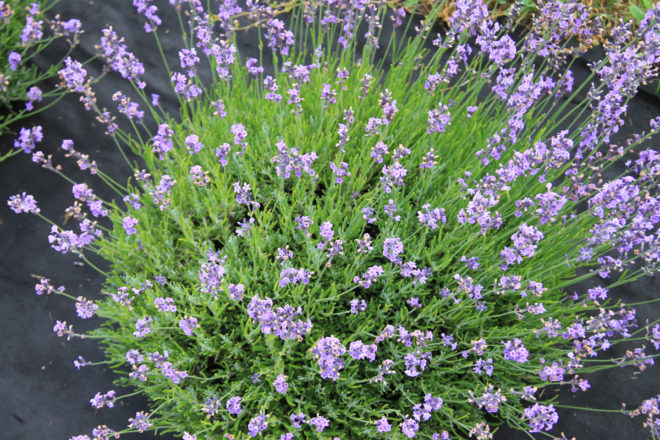 How Tom and Bonnie Ansley Created a Private Lavender Retreat

In 2014, Tom and Bonnie Ansley had just moved into their new home: a restored and remodeled stone barn on a 50-acre piece of land just outside of Fish Creek. The property included a dying cherry orchard, damaged by the previous winter’s harsh weather. Looking at the orchard from their rear-facing windows, they had a new vision: rows of lavender.

They had visited lavender farms during their travels and had always been drawn to the idea of growing the beautiful plants. With the new space to devote to the growing effort, they decided to dive in. They began learning about what this new adventure would require, and soon they had begun to bring their vision to life by planting 200 lavender plants.

By year two, the rows had expanded up their sloping hillside, and today the Ansleys are growing more than 1,200 plants.

“It’s really fun, which has always been our goal,” Tom said. “We enjoy it. It’s our summer hobby.” He’s been keeping a journal of their growing journey on their blog, Door County Botanicals.

The harvest this year took place during the first weeks of July, when the bushes had reached about 50 percent bloom. That’s when the buds contain the most oil, which is what creates the appealing scent that’s widely used in aromatherapy to promote relaxation and calm.

In a shed near their rows of lavender, the harvest is now drying on custom-built drying racks that hang from ceiling to floor. Lavender bundles take about 10 days to dry, with some varieties drying to a rich, beautiful color that’s ideal for dried bouquets; and others changing to a duller gray for culinary use or to be used in sachets.

For example, if the goal is to have beautiful dried bouquets, the Royal Velvet or Violet Intrigue varieties are best because they dry in slender bunches and stay richly hued. To create fragrant sachets, Buena Vista is a better choice because it blooms continuously and has a wonderful, heady aroma. Or, if the focus is on fresh bouquets, the Sachet and Purple Bouquet varieties grow long, colorful stems that look stunning when displayed in a vase.

When harvesting and creating their end products, the Ansleys never use any plastic, which has been a part of their vision from the beginning.

“We hate plastic,” Tom said, “so we thought, ‘What can we give people that doesn’t use plastic?’ In the market stall, we keep it natural and sell sachets and dried and fresh bouquets.” But they don’t sell lotions, oil or anything else that would require plastic packaging.

Since their first planting, the Ansleys have primarily grown English varieties of lavender, which are edible and easier to grow in the Midwest. Recently, though, they’ve started experimenting with French varieties, which are inedible and harder to grow, but which produce about 10 times as many blooms.

The Ansleys don’t grow their lavender for a specific use; instead, they mostly revel in the beauty of the plants and the gardening work itself, as true hobbyists do.

“The other evening, we picked a variety of the buds and had a glass of wine on our patio while comparing them and trying to name each variety,” Tom said. Plus, Bonnie appreciates that it’s another source of pollination and loves watching the busy bees at work.

So what do they do with their harvest each year? The market stall they’ve set up is open to visitors 24/7, May – October, but they’re also very generous with sharing their bounty with their neighbors, friends and, recently, residents at Scandia Village, who can put the bundles to use in their own way.

As hobbyists, the Ansleys don’t frequently enlist any additional help – and plan to keep it that way – but with 1,200 plants, harvesting has become a big task. According to Tom’s count, this year they spent 70 and a half hours harvesting 1,100 lavender bundles, which works out to 3 minutes and 45 seconds per bundle.

“We are finding ourselves starting to walk that line – we don’t want to be a business!” Tom said. “But Janice [Thomas] from the Savory Spoon does often stop by and lends a hand now and then, using some lavender for her own recipes, like in her lavender ice cream.”

Now in their fifth season of lavender growing, the Ansleys have enjoyed having the market stall and sharing everything they’ve learned so far.

“We feel like it gives us a connection with the community and allows us to share the bounty each summer,” Tom said.

Still, as with the seasons, they welcome the time when fall arrives and the growing duties wane.

“Just like with the winter weather,” Tom said, “I’m eventually glad to see the season change, and I don’t have to be on the mower so much!”

Read the Ansleys’ blog about their lavender-growing experiences since 2015 – and more – at doorcountybotanicals.wordpress.com, and visit the Ansleys’ market stall at 4281 Cottage Row in Fish Creek. Their lavender fields are not open to the public.