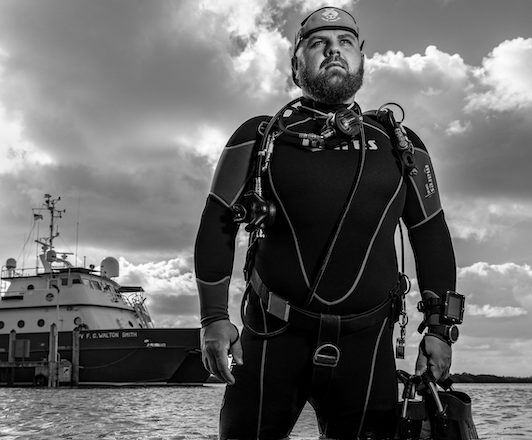 During his 30 years on the planet, Ryan Fochs has covered a great deal of it. He has set foot in dozens of countries on six continents in his quest to investigate the world on land and at sea.

The 2009 Gibraltar High School alumnus also graduated from the University of Wisconsin-Oshkosh with a triple major in anthropology, philosophy, and ecology and evolutionary biology, but it wasn’t until the middle of his college years that he found the spark to do what he desired.

“Through high school, I was a stereotypical middle-of-the-pack kid,” Fochs said. “I didn’t invest a ton [of] time early on. Around mid-college, I took off, and by the end of college, I was getting my own research grants and going off to places. Anthropology was what stood out to me and where I focused my first years in the field.”

During the decade following his undergraduate years, Fochs sold many of his possessions, stored sentimental items at his parents’ home and “took off with a big backpack and a microscope.”

Earlier in his postgraduate field studies, Fochs ventured to West Africa, where he spent time in Sierra Leone as a research assistant studying great apes in the tropical rainforests. In Kenya and the Democratic Republic of the Congo, he continued his research work as a primatologist. Much of the research entailed tracking primates to collect spatial and behavioral data.

“I was with bonobos, living as far away from humans as you can while in the Congo,” he said. “I went scuba diving while on holiday and fell in love with the underwater world. I wanted to reassess where I was at. When I decided the primate game was not what I wanted to do with my life, I started making the pivot.”

Fochs has since immersed himself in the field of underwater archaeology, earning a master’s degree in underwater and maritime archaeology. He notes that scientific scuba diving is notably different from recreational diving because the objective is to collect data, but “it is still a ton of fun,” he said.

Fochs now resides on another peninsula — in Florida — where he’s pursuing a Ph.D. at the University of Miami. He ventures out of Miami regularly and is amassing a wealth of experiences around the globe in the areas of environmental and archaeological research.

His most recent career endeavor has continued to take him to new places to research shipwrecks in Florida, Mexico, throughout the Caribbean Sea and up to the Great Lakes.

“There are so few of us in submerged archaeology,” Fochs said. “Diving is a huge aspect of what we do. We live on ships for weeks at a time, and life can be very transient.”

Fochs’ environmental career has given him the opportunity to work on projects supported by the National Geographic Society, which funds research and assists environmental researchers and archaeologists such as Fochs and his team of divers.

“I look at artifacts and shipwrecks through an environmental lens,” he said. “I think about how the material is being impacted by the environment, as well as how the environment impacts the artifacts left behind. However, we are most interested in the people behind the material culture, such as the maritime history and humans’ past interaction with the water.”

Fochs plans to finish his Ph.D. in the next four years and eventually continue work in the field of natural and cultural resource management and policy.

“I am investigating how to restructure the policy for natural resources to include preservation and protections for cultural material that lies on the seafloor,” he said.

Fochs acknowledged that even though his experiences as a child growing up in the environmental haven of Door County did not directly lead him into his career field, his work has indeed come full circle.

“I moved [to Door County] in second grade,” he said. “I didn’t realize it until years later, looking at it in hindsight. Having access to those parks and being an outdoor-centric place, I come back and think, ‘Oh, yeah, this makes perfect sense.’”