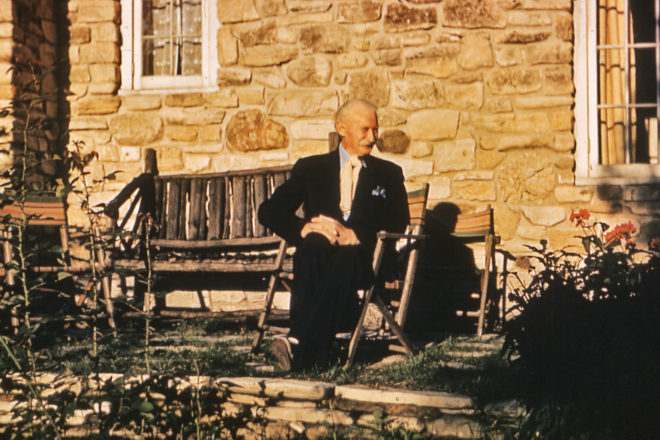 Jens Jensen, who founded The Clearing Folk School in 1935, may not have been familiar with the term “environmental stewardship,” but he certainly practiced it on these 128 acres, as well as in many other places, during his long career. Although best known for his ground-breaking, Prairie-style landscape-design work in Chicago parks and on numerous private estates, Jensen was also an important and influential leader in the conservation movement from the late 1800s until he died at The Clearing in 1951.

Throughout his 65-year career, he worked to preserve some of the best of the Upper Midwest’s native landscapes. His last conservation work was right here in Door County in the mid- to late 1940s, when he led the effort to establish several town and county parks, including Ellison Bluff and Door Bluff Headlands County Parks. Jensen also advocated for Whitefish Dunes to become a state park, which happened in 1967.

Jens Jensen was also an early and tireless promoter of native plants. He recognized that they were, in his words, “the most fitting and enduring, as nature has proven through untold years of elimination.” He deserves the lion’s share of the credit for starting the native-plant movement in the Midwest. It began for him in the late 1880s, when he designed and planted his American Garden in Chicago’s Union Park – perhaps the first native-plant garden in a public park.

The native-plant movement that he started 130 years ago grows stronger every year and is a legacy that The Clearing and many in the Door County community honor every day.

Today, 68 years after Jensen’s death and 84 years after he founded The Clearing, conservation is about much more than protecting natural areas from development and planting native plants. It’s not that these aren’t still very important – they are – and if anything, they are now more important than ever. But the concept that the word “conservation” was once used to describe now also encompasses issues and concerns that Jensen would not have considered.

One of these is invasive species, and at The Clearing specifically, invasive plants. Although there must have been invasive plants in Jensen’s time, they would not have been, at least in most places, as pervasive and environmentally destructive as some are today, including, in Door County, phragmites (an invasive grass along shorelines), garlic mustard and common and glossy buckthorn.

At The Clearing, controlling invasive plants has risen steadily up the list of management priorities during the last 20 years. We have ongoing control programs for autumn olive, dame’s rocket, forget-me-not, valerian and white sweet clover. We also stay on top of others that appear in smaller numbers or in limited areas: Japanese barberry, Asian bittersweet, helleborine orchid, everlasting pea, vinca, creeping bellflower and Tatarian honeysuckle. And, we watch for those that we fear will arrive on the property one of these days, including garlic mustard, common buckthorn and black locust.

In addition to removing invasive plants, we educate our guests about the importance of controlling them. For many people, getting past “But it’s so pretty” – especially with showy plants such as forget-me-not, dame’s rocket and everlasting pea – is an important first step toward understanding the importance of controlling invasive plants and realizing that a plant that’s pretty in a city garden might be an environmental disaster in a natural area.

Maybe the most important environmental-stewardship action that The Clearing has taken “post-Jensen” is our conservation easement, which was established in 2006 in partnership with the Door County Land Trust. It limits development – new buildings, building additions and roads – to five small zones that, when combined, total about eight acres, or 6 percent of the property. The rest of the property – 120 acres – may never be developed. Of all that has been done at The Clearing since Jens Jensen died, establishing this conservation easement is what I believe would please him the most.

The Clearing will always honor Jens Jensen’s legacy of environmental stewardship. It has been – and will continue to be – our guiding light.

The Peninsula Arts and Humanities Alliance, which contributes Culture Club throughout the summer season, is a coalition of nonprofit organizations whose purpose is to enhance, promote and advocate the arts, humanities and natural sciences in Door County.