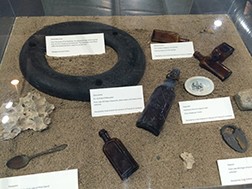 Artifacts from shipwrecks in Death’s Door.

“One of the biggest misconceptions people have about Death’s Door, is that it’s called that because of all the shipwrecks that happen in the area.”

To correct this misconception, Adam Gronke, site manager at Gills Rock Maritime Museum, curated an exhibit about Death’s Door, which is now on display at the museum.

“Every person that would come in last year, I would spend 20 minutes explaining to them what Death’s Door was, and I thought we could better serve the public by doing well thought-out research, and put up an exhibit,” Gronke said.

The exhibit begins with a bird’s eye view of Lake Michigan, shot by an aerial drone, which visitors experience through one of the museum’s tablets.

Port des Morts, the name given to the passageway by the French, translates literally as “Door of Death.”

“The French had contact with the Native Americans, and heard all these legends about this violent passageway,” Gronke said. The museum focuses on one particular legend: a story of conflict between the Potawatomi, who were forced off their land in the northern peninsula by the Winnebago.

The Potawatomi, in preparation for a retaliatory attack, sent two scouts to Winnebago land, with instructions to create a fire to signal that it was safe for an attack.

This story pre-dates the many shipwrecks that occurred, once Death’s Door became a shipping route, from southern Michigan and Chicago to Green Bay and Menominee.

Gronke explained that the many sandbars in and around Death’s Door made the area dangerous to navigate on sail power alone. “The currents from the bay and the lake create a washing machine effect,” he said.

The wrecks of the schooner J.E Gilmore, and the schooner A.P. Nichols, and the scow schooner Forest fit in with the ominous, violent legends that French explorers heard when they first arrived in Death’s Door. All three vessels sank in exactly the same spot off Pilot Island. The Forest met her fate first, followed almost exactly a year later by the J.E. Gilmore, the A.P. Nichols followed 10 days later.

The exhibit, which is now permanent, also includes artifacts from shipwrecks in Death’s Door, including bottles, spoons and soap dishes, as well as more accounts and legends of the passageway’s violent past.