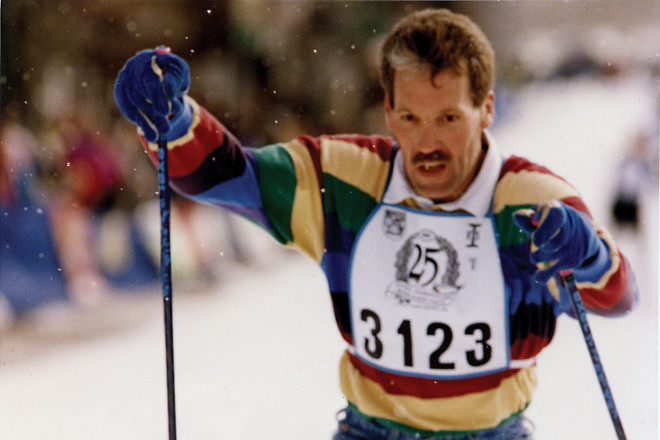 Greg “Fuzzy” Sunstrom may be the only person who has finished the famed Birkebeiner ski race in blue jeans.

There’s a common assumption that life in Door County grinds to a halt between the months of November and March. People that have never spent an entire winter in the county, much less visited in the “off-season,” tend to let their brains follow the easy path to this conclusion, believing that there simply can’t be anything to do, the weather must be horrid, and that “the locals” are probably just a bit crazy. However, all anyone has to do to squelch this myth about Door County in the wintertime is to use Greg “Fuzzy” Sunstrom as an example.

Yes, Fuzzy is the Fuzzy of Fred and Fuzzy’s Waterfront Bar & Grill. So, those that have taken in a sunset on a summer’s eve overlooking Little Sister Bay wouldn’t blame Fuzzy if he bought into this notion of downtime during the winter – a time when he could kick up his feet and relax from the hanging of the “Closed for the Season” sign until April 1st. 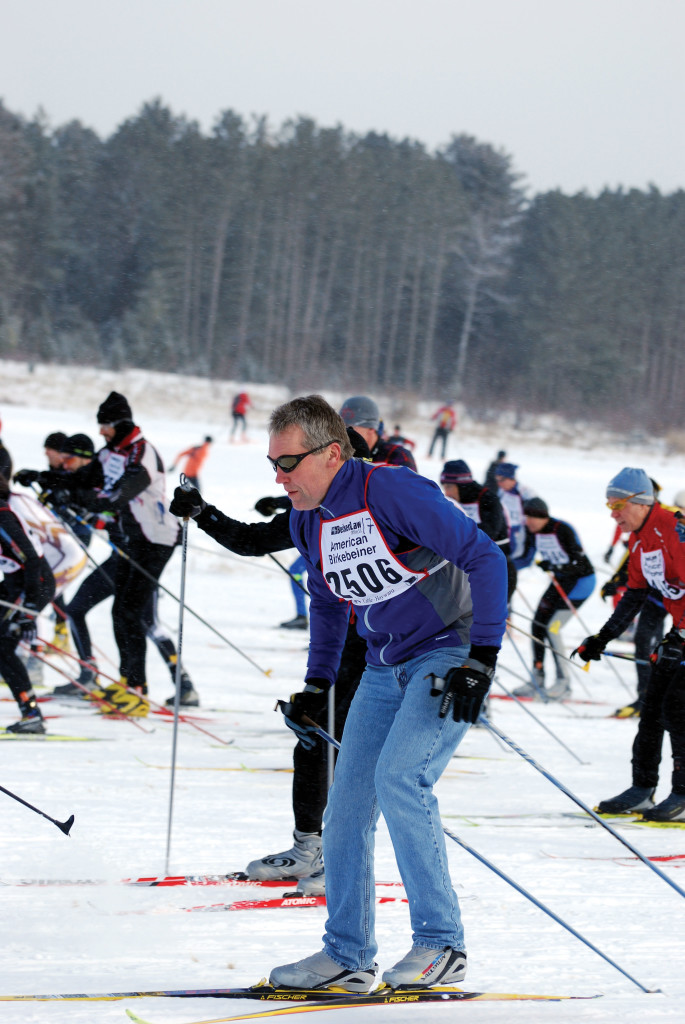 In addition to his very active role in the restaurant since 2001, Fuzzy and his wife Sue manage the Little Sister Resort, the adjoining property that surrounds the waterfront restaurant. The “opportunity,” as Fuzzy calls it, to remain in the area where he was raised presented itself 35 years ago, and he has been managing Little Sister Resort ever since.

“I grew up two houses down from Husby’s, so I moved a whole two miles,” he says. “My wife grew up in Gibraltar, so she moved nine miles.”

While the resort closes in the winter, there is still work to be done. From lining up employees for the following season, including corresponding with international workers, to maintenance work on 30 buildings, Fuzzy is never lacking things to do. However, despite the abundance of items needing to be crossed off the “To Do” list, Fuzzy appreciates the varied pace from the chaos of summer.

And he certainly does – ski that is. In fact, Fuzzy logs enough miles on Peninsula State Park’s cross-country ski trails year after year to qualify for the second wave (just behind the elite skiers) of the American Birkebeiner ski race. Merely taking a look at the race’s official website (www.birkie.com) provides a bit of insight into just what type of accomplishment this is. The site proclaims:  “Today, nearly 8,000 skiers of all ages and abilities and 20,000 spectators from around the world gather every February in the Cable-Hayward, Wisconsin area to celebrate ‘The Birkie,’ a race which has become a legend in the cross-country ski world.”

Fuzzy, who has skied the Birkie 16 times over the past 18 years (the two missing years are due to a cancellation of one year’s race and a ski trip to Canada another year), has his own legend in accordance with the race. When asked about it he smiles, “I do have a little claim to fame:  I’m the first guy to finish the race in blue jeans.”

While plenty of the 8,000 skiers in the race each year must ski without the latest advancements in ski attire, Fuzzy’s reign in the top tier of Birkie finishers is sort of an anomaly if judging based upon his outfit. Rather than the moisture wicking race suits of those around him, he keeps to cotton, skiing and training in jeans all the time. In fact, if it’s not below 10 degrees, Fuzzy will rarely even add a pair of long johns.

Brian Fitzgerald, another Door County winter enthusiast, avid skier and Birkie participant, says, “We kid him about being the fastest skier in North America in jeans.”

Fitzgerald recalls one year of the Birkie when the snow conditions were so wet “by the time he finished the race, I bet he added 10 pounds with moisture…it’s almost like a personal handicap.”

Even with “the handicap,” Fuzzy continues to keep pace in the 34-mile race.

Part of Fuzzy’s consistency over the years is due to the fact that he gets out and trains, averaging two hours a day skiing on the trails throughout the winter. Fuzzy’s dedication to the sport extends beyond his training with many more hours spent volunteering to groom the ski trails of Peninsula State Park. Depending upon the snowfall, the task of grooming all of the trails in Peninsula State Park can take up to 10 hours to complete.

The park’s superintendent, Tom Blackwood, says, “Fuzzy has served as our ski trail volunteer coordinator for the past several years…he’s a hard worker and knows how to get the job done.”

While Fuzzy has been volunteering his services at the park for over 10 years, Blackwood says that in times like these, it’s imperative for the park to have assistance from volunteers. With budget cuts and hiring freezes to overcome, “[Peninsula State Park] really requires the help of volunteers like Fuzzy,” among others, to maintain the programming throughout the winter months, says Blackwood.

Fitzgerald also volunteers his time grooming the trails in Peninsula State Park and agrees with Blackwood’s assessment of Fuzzy’s work ethic. Fitzgerald’s impression of Fuzzy has grown from their shared affinity for skiing, time spent grooming together and from a previous working relationship. When Fitzgerald first opened his pottery shop 16 years ago, he also worked construction for Fuzzy. Over the years, his respect has grown.

“What’s wonderful about Greg is that he volunteers in a lot of places…he’s very dependable, which is why I think so highly of him,” says Fitzgerald. “If you ever need help, the guy is there.” 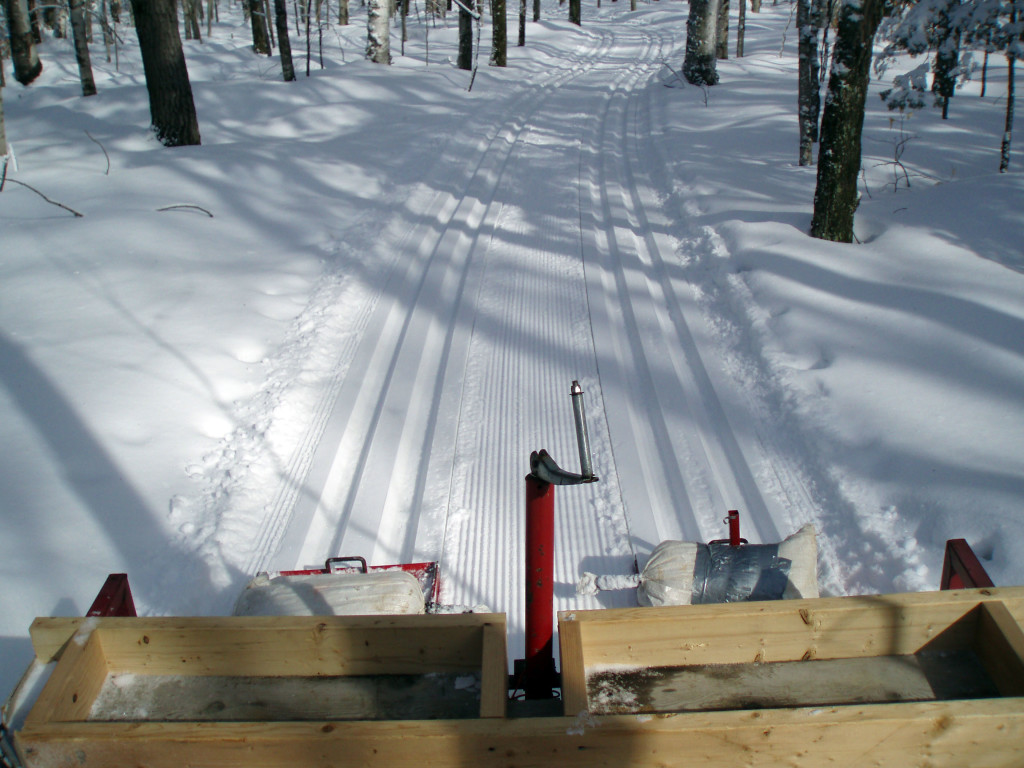 The view from a trail groomer, where Fuzzy Sunstrom spends a lot of time come winter as a volunteer who helps maintain the county’s ski trails.

This dependability and extension of his services is apparent in all aspects of Fuzzy’s life. In an official capacity, he is a member of the Door County Visitor Bureau Board, which serves to promote Door County as a unique travel destination, and in a more informal way, Fuzzy promotes the Door County lifestyle by organizing a number of activities for his peers. A few events Fuzzy organized last winter include:  two full moon, social ski outings from Lot 5 in Peninsula State Park with fire pits and grills; a “Men’s Day” excursion to Washington and Rock Islands via snowmobiles; a family snowmobile outing to Chamber’s Island the weekend of Fish Creek’s Winter Festival; and a one-day, cross-country and downhill ski adventure to Wausau’s Nine Mile Forest and Granite Peak ski areas for a busload of 36 people.

To Fuzzy, his efforts don’t seem like work; it’s just what he does.

“I enjoy winter so much, and I’m kind of an organizer type person,” he says. “I just organize these things, and I have fun doing it; and everybody seems to have fun when they come out.” He concludes, “It makes winter feel real short.”

So, anyone grappling with the notion of a long winter need only look to Fuzzy for some inspiration about the brevity with which winter in Door County can pass. The only legend he may intend to perpetuate is the one about him being the fastest skier in blue jeans.