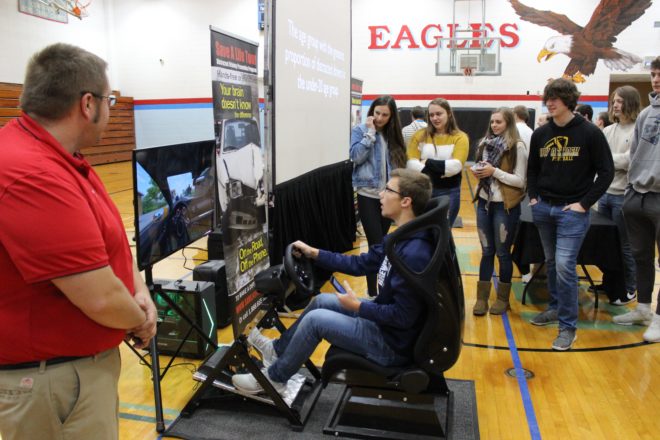 A student tries the texting-while-driving simulation. Photo by Brett Hanson.

I was behind the wheel when I got a text that said, “What’s the name of that shark movie?” I started thinking about it while I pulled up to a red light. Was it the shark from Finding Nemo that the text was talking about?

In retrospect, I know it was obviously Jaws, but I made my right turn while still thinking about it, phone at the ready. I couldn’t think of any other options at the time, so I started typing Finding Nemo. I couldn’t get the letters right, so I kept backspacing and retyping.

Before I knew it, I had crashed my car into the right guardrail.

I was behind the wheel, but I wasn’t actually on the road. I was participating in a texting-while-driving simulation during the Save A Life Tour’s stop at Southern Door High School on Oct. 30.

Safe driving is always a choice – a fact that the Save A Life Tour reinforces in powerful ways. It emphasizes how drivers’ choices dramatically affect those drivers’ own safety and the safety of the people around them, and it delivers information through a presentation, videos, simulations and surveys.

According to its website, the Save A Life Tour has visited more than 1,500 colleges and universities and 600-plus high schools across the country to instruct students and to assist health departments, police departments, corporations and hospitals with employee training.

The videos were graphic and heartbreaking, to the point that a handful of students had to excuse themselves. By the time the videos were over and Principal Steve Bousley transitioned into the rest of the program, there was not a smiling face in the room. But the tour is effective for more than just high school students: The tragedies shown in the videos forced me to reflect on and reevaluate my own driving practices.

So did the driving simulations: one for driving under the influence and the one for texting while driving. Though the students were disappointed to hear the simulations wouldn’t be like the action-adventure video game Grand Theft Auto, the simulations were powerful, and their underlying message was heavy.

The driving-under-the-influence simulation required the “driver” to look at a screen while wearing a virtual-reality headset. The headset was almost dizzying in its own right, but the more the driver drove, the more the simulation increased the level of impairment, making it challenging to turn the car smoothly, stay in the lane and maintain a consistent speed.

It’s designed to make it hard for the driver to take corrective actions, which causes overcorrection. The heightened challenge is meant to mimic how disorienting it is to drive under the influence.

For the texting-while-driving simulation, drivers got a few seconds to get acquainted, then Clay Martin, a speaker and the tour’s manager, handed them a phone that received automated text messages asking silly questions that were similar to the one I received about the shark movie. The driver’s job was to answer the texts while staying on the road.

The first student to try it crashed in fewer than 10 seconds because he said he couldn’t find the letter “O” on the keyboard. Some kids survived their driving round. I crashed the car.

In both simulations, there were other important elements to keep in mind –other cars on the road (whose drivers may also be impaired or distracted), traffic lights and using turn signals – that all drivers encounter on the road every day.

Door County Sheriff Tammy Sternard spoke to share some advice: Nothing is worth risking your life for. Not getting into trouble with your parents if you decide to drink at a party, and not being five minutes late for work. Call a friend for a ride. Be late to work.

Martin talked about how things become a habit: texting, eating while driving, or driving under the influence.

The presentation was a call to action and a challenge to the students to influence those around them in positive ways. For Martin, that means those who are especially close: family members and younger siblings who are watching teens’ actions and choices.

I couldn’t help but walk away from the school thinking about the implications of every driver’s actions every day while operating what is, in effect, a lethal weapon – even when those actions are as seemingly simple and innocent as having a snack or talking on the phone.