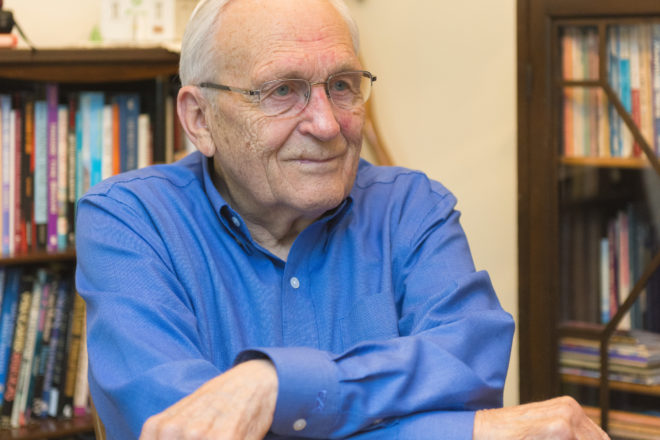 October 1, 1927: Columbus Reporter (North Dakota): “A bouncing baby boy was born to Mr. and Mrs. Delmar Dahl on Saturday, Oct. 1. They have named the little man Delmar DeLloyd and are very proud of their first born.”

March 1933: First day of school. Dad takes me by horse and sleigh. We see children playing in the school yard. I laugh at a funny coat a boy was wearing. We stop and Dad says, “We are in a depression. No money. Don’t ever let me hear you laugh at what anybody is wearing!” I haven’t since.

About 1937: Infrequently, we attend a small Lutheran church. I hear an older pastor preach, and I say to myself, “That story of Jesus is so beautiful. I’m going to tell it someday.”

About 1939: I attend Vacation Bible School, and I believe that Jesus died for my wrongdoings. We move to Battle View, North Dakota (population 52), where I stay with the Holmens, get to milk a cow and where Mrs. Holmen is like a second mother to me.

March 5, 1942: Doctor in Powers Lake, North Dakota misdiagnoses my illness. We go to a hospital in Minot, where I have a 140 pulse and double pneumonia. Turns out I have rheumatic fever. Doctor says, “I don’t know if he will live through the night.” Five weeks later, the doctor says, “You can go home tomorrow.”

October 1, 1942: I get out of bed for five minutes every other day. My first steps are to the Thanksgiving table. I go outside in January.

May 1946: Graduate from high school and head off to Bethel College.

1976: Begin the first of 80 dialogue talks to couples called “We’re Glad We’re Married … Most of the Time!”

June 1, 1984: Last migraine headache after a lifetime of them.

September 2009: I suffer a stroke without any residual effects.

Oct. 7, 2018: I preach my last message and am thankful for nearly 70 years of speaking and preaching. “I have come that you may have life and have it to the full!” (Jesus in John 10:10.) Sometimes I wake up in the middle of the night and I say, “Well, Jesus, I didn’t make it to your house tonight either!”

Delmar Dahl is a minister who retired to Door County in 1990. He has served 23 interim ministries in the county in 20 years and three stints as the chaplain at Scandia Village in Sister Bay, where he has lived since 1998.