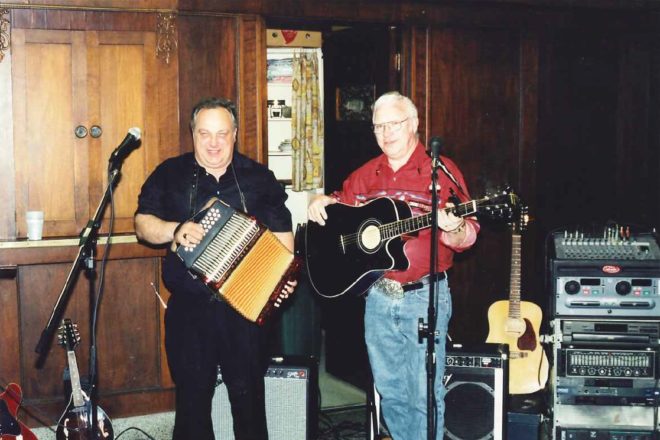 (From left) Wally and Donald Bittorf doing what they did so well. Submitted.

It started with a show at the Carlsville Bar. Sixty years later, brothers Donald and Wally Bittorf were still at it, playing country and western music together up and down the peninsula until they literally couldn’t play any more.

Donald Bittorf, a member of the Bittorf Brothers country and western band, died Oct. 25 at the age of 84, just a couple of months after playing a show at Simon Creek Winery in August.

“We grew up in a kind of a musical family,” Wally recalled two days after his brother died shortly after contracting COVID-19. “My dad played guitar. He bought it for my two older brothers, and they would fight over it, so he figured he’d play it himself. My grandmother had all the music that inspired us. She had an old record player you’d wind up and play. She taught us the words to a lot of old songs I didn’t know.”

Those early days and nights listening to music in their home in Egg Harbor stuck with them. The brothers played in separate bands for a while until coming together in their mid-20s, then sticking together for decades to come. Wally played button accordion and guitar, and Donald played lead guitar and led the show, though both brothers sang. Other players, such as mainstay Jim Simonar, joined the group over the years to play reunions, weddings and bars from Gills Rock down to Kewaunee, and they were regular performers at the Door County Fair, Valmy Thresheree and Jacksonport Maifest for years.

Though he grew up with music all around him, Wally’s son Daryl came late to the band, in part because he didn’t think music was anything special growing up.

“I thought everyone’s dad had a band,” he remembered. “That’s why I didn’t get into it right away.”

There was always music on in the house. Daryl rummaged through his dad’s record collection – Buck Owens, Duane Eddy, Johnny Cash.

“I just remember listening to hours and hours of music growing up,” he said. “I was so bored of it.”

Then, when Daryl was 25, Wally bought him a guitar, and within months he was playing with his dad and Uncle Donald.

“It was extremely comfortable,” Daryl said. “We all knew what we’d do before it was done. The singing was easy. We never had a playlist, and if we did, it would last about four songs.”

Donald was the showman, Wally said – the life of the party.

“Donald was always pretty funny,” Daryl said. “He’d try to get you to crack up when you were in the middle of doing something.”

As the years went on, Donald encountered the health problems that come with making it into your eighth decade: heart ailments, arthritis. He couldn’t play as often as he liked, but he still made it on stage when he could.

A service for family and friends of Donald Bittorf will be held Saturday, Nov. 7, and livestreamed on the Huehns Funeral Home Facebook page. A tribute page is available at huehnsfuneralhome.com.